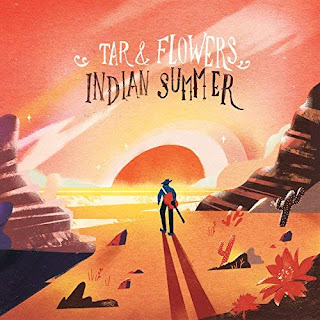 These days I often find myself seeking refuge in music, needing some beautiful or soothing or uplifting or honest – or even simply human – sounds to balance out the general, loud and unpleasant noises of the world. And occasionally, in this quest I stumble upon magic, upon an album or band that somehow exists on a plane completely separate from whatever insanity is driving the country into oblivion. It was like that with We Are The West. It is also like that with Tar & Flowers, another band based here in Los Angeles. Their music is basically in the folk and country realm, but sometimes with a haunting, ethereal and timeless quality that nevertheless works to make the listener feel better about life, because it immediately lifts us from the quagmire, from the chaos, and in effect obliterates ugliness. I don’t know how it accomplishes this exactly; that’s part of why I use the word magic. The band is the project of Taylor Hungerford, who plays guitar, sitar, banjo and percussion on the new release Indian Summer, as well as sings. He is joined by Wolf Kroeger on vocals, bass and percussion, and by Vern Monnett on pedal steel on one track. All of the songs on this album are originals, written by Taylor Hungerford.

The album opens with “Danny,” telling a deliciously compelling folk tale with a somewhat dark tone, reminding me a bit at times of Donovan, particularly at the beginning, before most of the instruments comes thumping in. “Danny traveled many lands in search of a queen/But no kingdom would take him.” That’s followed by “Summer At Michael’s House.” Some folk strumming on acoustic guitar is at the base of this one, but that is the only thing ordinary about this song. What’s built on top of it is strange and strangely beautiful. I am drawn to the vocals on this track. This track boasts some excellent vocal work, especially on lines like these: “And I find when I return again/Cursing what I gave/Because the light of time can amend/The changes our world made.” Also, those are some good lyrics. Then “Ten Ton Heart” begins with a more upbeat pop-country sound, but the vocals still have something of that haunted quality. Check out these lines: “I wanted the truth but I got honesty/Like a boxer who fights but doesn't know how to bleed/You don't get a prison, it comes in parts/And you learn to build it with a ten ton heart.” I especially love the line, “I wanted the truth but I got honesty.” To my ear, the electric guitar has something of a late 1960s psychedelic vibe. “I told the jester like I told the king/That everything I do doesn’t mean a thing.”

“August” has a kind of sweet, gentle folk sound, particularly at the start. Its first line is “It was hot that winter and it was hot that June,” a perfect line for Los Angeles. And check out these lines: “I felt your hand, was cold to the touch/Had I given too little or kept too much?/But I think you wanted it that way.” In addition to some excellent lyrics, this song has an undeniable beauty. “Because all I had and all I had done/Was turned to dust under your bright sun/Like the lies we tell that we wish were true.” And “This Machine” has a beautiful and engaging tone from the start. In an album full of excellent material, this is probably my favorite track. Here is a taste of the lyrics: “I am the poison in the well/I am the garden in which we fell/’Cause even then I still could see/The snake was crawling in this machine.” Something about this song is so effective, so moving, so intriguing, that I find myself listening to it repeatedly to make sure I take everything it’s giving.

On “Lost,” it is the guitar work that first pulls me in. There is also some interesting percussion. And of course there are some good lyrics, like these lines: “Sleep comes to the proudest of the weary/As life does to the stillest of the dead./So rest your head and try not to figure the weight and cost/To find your way starts with getting lost.” There is some optimism in there, which I appreciate. That’s followed by “Opium,” which has an unusual type of beauty of its own, gathering us in its shadowy embrace. “Opium has clouded my mind/And though I do not want to die/She never treats me unkind.” “Rumor” comes on strong, with glorious bursts of color. “And if you listen very still/You'll hear the past you just can't kill.” This absolutely wonderful album then concludes with “The Lovin’ Kind,” which is the track that features Vern Monnett on pedal steel. This one takes place in Los Angeles, mentioning Echo Park in one stanza. But for some reason, these are the lines that always stand out for me: “In the morn, he looks to the west/And sees her risin’ there/He moves his hand across his chest/Making shadows with her hair.”