The US Festival 1982: The “US” Generation Blu-ray/DVD Review 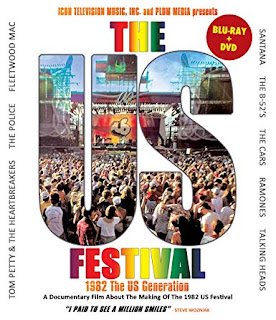 The first US Festival was held in September of 1982. This three-day music festival featured bands for a fairly wide range of musical tastes, with The B-52s, Eddie Money and Santana among the acts. Apparently, it was a glorious financial failure. But for those who attended – both on stage and in the audience – it was an incredible success. The US Festival 1982: The “US” Generation is a documentary recounting the story of that festival, and how it came to be. It features interviews with the people behind the festival, as well as some of the performers, and of course also includes plenty of concert footage. The Blu-ray/DVD package also includes some special features.

You can’t help but like Steve Wozniak, the man who had the idea for the festival. His passion for the project is still apparent when he speaks of it all these years later. And his heart seemed to be in the right place. Wozniak is the co-founder of Apple, and so in the early 1980s he had quite a bit of money. He’s also a big music fan, and he decided to spend some of his money to put together a music festival. He wanted it to be about the whole experience, including camping and so on, not just the music, and so the event was planned really well. As Grateful Dead drummer Mickey Hart says in an interview: “Woodstock wasn’t really thought out. This one was.” Peter Ellis (the president of UNUSON Corporation, which was created for the purpose of putting on the concert) says the concept of the festival was “the idea of community, the idea that technology’s going to make us a community.”

There are interviews with several of the musicians, including Mick Fleetwood, Mickey Hart, Stewart Copeland, Kate Pierson, Eddie Money and Joe Sharino. Joe Sharino tells a wonderful anecdote about being late. Kate Pierson talks about the appeal of the “Unite Us In Song” idea (which is what UNUSON stands for), making it “more than just a concert, more than just a party.” There is also a bit of footage of interviews conducted at the time, with people like Danny Elfman, Fred Schneider and Joey Ramone. And there is some backstage footage. The stuff about the gold backstage passes is funny.

We are treated to The B-52s playing “Big Bird” and “Strobe Light,” The Police performing “Can’t Stand Losing You” (that’s an awesome version), Eddie Money playing “Gimme Some Water,” The Cars playing “Bye Bye Love,” Santana playing “Black Magic Woman,” Tom Petty And The Heartbreakers performing “Refugee” (which is fantastic), and Fleetwood Mac playing “The Chain.” There are also short snippets of most of the other bands, including The English Beat, Oingo Boingo, Dave Edmunds, Talking Heads and the Grateful Dead. Noticeably absent from this documentary are The Kinks and Pat Benatar, both of whom performed on the second day. Of course, I wish there was more footage of the Dead (we get just a few seconds of “Truckin’”). The Grateful Dead’s involvement is what led me to hear about this festival in the first place. But there is a bit of footage of the Dead at a press conference, where they talk about how they’ll be playing at nine in the morning. And in fact their part of the show was billed as “Breakfast With The Grateful Dead.” There is also footage of Bill Graham talking about the Grateful Dead: “I think they should be here, because they’re the only ones who do what they do.” Indeed!

As much as I love the concert footage, some of the most interesting footage comes in the section on securing and creating a venue for the festival, including footage of a meeting where citizens expressed their concerns regarding a festival taking place in the area. And the material about the creation of the site is fascinating, all that had to be done, including building a special off-ramp from the highway. I love the footage of Bill Graham at the site as the stage is being built.  I also love that the success of the festival – then and now – is judged by how happy people were, not by whether it made a profit.

On the commentary track, director Glenn Aveni tells some anecdotes on the making of the film and the conducting of interviews, and about the festival itself. Interestingly, the festival was filmed for Wozniak’s own enjoyment, with no intention of the footage being released. He talks about The Kinks not being filmed, so that explains why there is no footage of them in this documentary. He also tells a pretty humorous anecdote about The Kinks at this festival. And he does get into the reasons why there isn’t more footage of the Grateful Dead. He has plenty to say about The Police. But he also at times lets minutes go by without providing any thoughts or information.

The US Festival 1982: The “US Generation was directed by Glenn Aveni and was released as a Blu-ray/DVD combo pack on August 10, 2018 through MVD Visual.
Posted by Michael Doherty at 6:40 PM