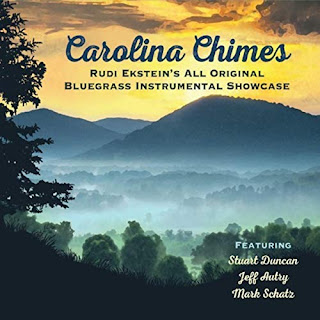 What music works best for you when you’re trying to fight the despair and horror brought on by a sick reality that allows a demented narcissist into the White House? I’m guessing that for a lot of folks it’s bluegrass. There is something bright and cheerful and honest about this music, and honesty is something that seems hard to come by in the world at large. Mandolin player Rudi Ekstein’s new album, Carolina Chimes, features all original bluegrass music. All tracks are instrumentals. Here is good, pure music played by some talented musicians. In addition to Rudi Ekstein on mandolin, this album features Stuart Duncan on fiddle, Jeff Autry on guitar, Mark Schatz on upright bass, and John Plotnik on banjo and dobro, plus guest musicians on certain tracks.

The album opens with “Cornerstone,” a tune that features some fine playing, music to ease our worried minds. This kind of music is always so effective, particularly when played by skilled musicians like the folks on this disc. That’s followed by “Indian Rain,” which begins with more plaintive, emotionally driven work on fiddle. The feel then changes like thirty seconds in, with the pace picking up somewhat, and the track becomes a pleasant, somewhat easygoing number with a western vibe. Then “All Night In Kentucky” is a faster-paced tune with some glorious picking. Again, there is joy here, and the chance to get swept up by the music and carried far, far away.

One of my personal favorite tracks is “Hoot Owl Hop.” And, no, it’s not just because of its cool title, though that certainly doesn’t hurt. This is a delicious jam that has a strong groove at its base and goes in some wonderful directions. There is a delightful, playful quality about it, and it is a lot of fun, in addition to being rather catchy. Toward the end, the bass takes the lead for a moment, which I love. Then “Jessy’s Fancy,” a song named after Rudi Ekstein’s daughter, has a sweeter, prettier vibe, with a kind of western rhythm, a sort of horse-trotting-out-on-the-range kind of thing. Things then really take off with “Spikebuck,” one of those wild bluegrass races where everyone wins. I can’t help it, I’m a sucker for these fast-paced bluegrass gems. They’re a whole lot of fun, and always seem to impress. Plus, I feel like this song could help us all lift right off the ground and fly off into some splendid, bright land of indeterminate alcohol content. Patrick Sauber plays banjo on “Hoot Owl Hop,” “Jessy’s Fancy” and “Spikebuck.”

Another of my personal favorites is “Flapjack,” an interesting, kind of sneaky, groovy tune which features more fantastic playing. I just totally love this track. Then comes a tune to make you grab your partner and spin her around. Titled “Bacon In The Pan,” there is something innocent and joyful about it. This really is all about dancing. It’s followed by “Rockalachia,” another fun, light number, a rockin’ kind of bluegrass. Check out that bass; there is even a solo later on, but throughout the song the bass is just making the world a bit better. Rob Parks plays bass on this track, and Seth Rhinehart is on banjo. Then “Carolina Chimes,” the disc’s title track, is one that completely delights me, certainly another of the disc’s highlights. There is something incredibly catchy and even pretty about it. It’s happiness in the form of music. It’s followed by a slower, more somber number, a strange waltz titled “Dixie Sunset,” led by that work on fiddle. Well, it has a somber feel at the start; then it takes on a different, kind of exciting, perhaps foreign flavor. The disc then concludes with “Back Drag,” which opens like a horse race. And off they go! Listen as these musicians come recklessly down the stretch, hoping to be embraced by the arms of insanity. Yes, this is another of the disc’s highlights.

CD Track List
Carolina Chimes is scheduled to be released on October 5, 2018.
Posted by Michael Doherty at 12:02 AM