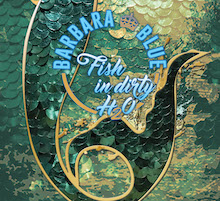 Barbara Blue is an accomplished singer and songwriter working in the realm of the blues, and based in Memphis, Tennessee. Her new album, Fish In Dirty H2O, features some original material, as well as special arrangements of some classic songs. Joining her on this release are Will McFarlane on guitar, Lester Snell on keys, Dave Smith on bass, and Bernard Purdie on drums, plus a horn section and several guest musicians on various tracks.

Barbara Blue has me in her grasp with that first, gospel-tinged hum which begins the album’s first track, “My Heart Belongs To The Blues.” She then sings the song’s title line to us, “My heart belongs to the blues,” and the strength and ache in her voice tell us this is true. Once that’s established, the song begins in earnest, the band setting a decent groove. I love the way she delivers lines like “Over and over I’ve tried to love you/But I can’t.” The line “But I can’t” has more of an intimate sound, and it sounds definite, final. There is no room for possibilities there. Her voice has a rough quality, as if she’d fought this for so long, but has now given into the blues. I think the blues are overtaking a lot of people these days. Barbara Blue follows that with an interesting cover, in which she takes Scott Sharrard’s “Angeline,” and changes the gender, and thus the name, in this case to “Johnny Lee.” That change causes at least one of its rhymes to suffer a bit – “plan” doesn’t rhyme with “woman” the way it rhymes with “man.” Still, it’s a good rendition, with some absolutely delicious backing vocals. Candace Mache, Lynette “Sue” McCracklin and Lorina McMinn provide backing vocals on this album. And there is another playful point to the name change to “Johnny Lee”: Johnny Lee Schell joins the band on guitar on this track.

I really like Barbara Blue’s voice, especially on a track like “Accidental Theft.” Listen to the way she belts out lines like “Somewhere in broad daylight you stole my heart.” There is a whole lot of power behind that voice, like a train, like an avalanche, like a volcano. And you get the sense there is a bit of danger there, for you, if you do her wrong, if you treat her poorly. And she has an accomplice here, that great electric guitar. Scott Sharrard plays guitar on this track. Barbara Blue then gets more into gospel with “Dr. Jesus” which features more nice work from the backing vocalists, including Maureen Smith, who joins them on this one. Of course the image of Dr. Jesus is rather comical, but the song is totally enjoyable. “You don’t need no Blue Cross/No Blue Shield/Don’t need to get your heart rate up/Fussing about your bill/Ain’t no co-pay/You just need to pray.” Michael Tols plays guitar on this track, as well as on “Fish In Dirty H2O,” the album’s title track, on which Barbara is joined on vocals by Al Kapone. This one is all about the vocals, the music basically a simple groove there to support them. Al Kapone delivers a rap in the middle of the song, first saying “Clean air’s overrated, baby.” Now how’s that for a line for these sad days of Donald Trump? Oh, Dr. Jesus, please pull the plug on Donald and his entire corrupt administration.

“Walk Away” has a great, slow soul vibe, featuring another excellent vocal performance. “There’s not enough money or time/To spend this life unhappy/Walk away, walk away/I’ve got nothing left to say.” Rick Steff provides some good work on organ. Plus, I really dig the horn. “Wild Woman” is fun even before Barbara’s vocals come in. This one starts with a good beat, then adds some cool stuff on keys and horns, and when Barbara Blue comes in, it is with power and joy. “Sometimes I think I’m about to lose my mind/I’ve heard it said wild women don’t get the blues/Well, I beg to differ, I know that ain’t true.” This one features some cool work on backing vocals, this time with Celia Purdie. Barbara tells us that wild women do in fact get the blues, adding that “Everybody has got the blues.” Sure seems that way these days, doesn’t it? Barbara Blue then offers some advice on fighting the blues in “Gravy Train”: “Take on life one day at a time/There’s no guarantee you’ll be here for the next sunrise/So enjoy today, please be kind” and “Live every moment like it’s your last day.”  I love the keys and horns on this track. Mark Narmore joins the band on keys. There is a nice jam at the end. (Should the title be “Glory Train” rather than “Gravy Train”?) The album concludes with a classic blues tune, Robert Johnson’s “Come On In My Kitchen.” And like the CD’s first track, this one begins with a bit of sultry humming. At first, she is accompanied only by guitar, giving the tune a deliciously raw feel. Then the band comes in, and the song takes on a strong blues rhythm. This is a good rendition, and I especially dig that section with backing vocals in the second half.

CD Track List
Fish In Dirty H2O is scheduled to be released on September 14, 2018 on Big Blue Records.
Posted by Michael Doherty at 7:10 PM