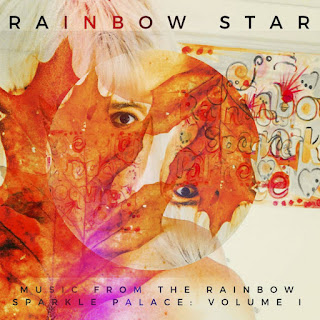 From the artist’s name and the album’s title, I expected Rainbow Star’s Music From The Rainbow Sparkle Palace: Volume 1 to contain songs that would feel perfectly at home on the children’s animated show My Little Pony: Friendship Is Magic. I could not have been more wrong. These songs are about serious subjects, including death, and are engaging. The first time I put on this disc, I intended to clean my apartment while listening. But by the second track, I gave up any such notions and simply lay down and closed my eyes to focus completely on the music. Rainbow Star is a singer/songwriter based in Kentucky, and her new album features mostly original material. On many of these tracks, Rainbow Star performs solo, playing ukulele, guitar and dulcimer, but she does have some musicians joining her on certain tracks.

The album opens with “Mermaid Song,” on which Rainbow plays ukulele, and is not accompanied by any other musicians. Her vocal performance is engaging, and there is a kind of Ani DiFranco vibe to her vocals at times. This is the song of a reluctant birth, in which she sings “Oh, how I kicked, but I did not scream/Cold and bloody, I did not breathe/I refused to breathe, I refused to breathe/I refused to be one of you.”  The lines that really stand out for me are these: “It was the first time I committed suicide/Well, I tried, oh I tried/I didn’t want to wake up/I didn’t want to wake up.” It is the repetition of that line is so effective, hitting me hard, as I’ve learned that often people won’t believe someone the first time he or she says something like that. “I prefer a heart attack to this place.” “Mermaid Song” is followed by “Pyramid Song,” which Rainbow Star also performs solo, playing both ukulele and chimes. This powerful song has such a sad and moving sound, and is about her experience at the pyramids. I’ve left North America only once so far in my life, and it was to go to Egypt to see the pyramids, an incredible experience. A friend got sick there, and actually vomited onto the Great Pyramid. Rainbow Star’s experience was more serious. “Don't tell me it's not safe for a woman these days/'Cause I wanna die in the pyramid/I wanna die in the pyramid.”

On “Ophiuchus,” Rainbow Star plays dulcimer, and is joined by Sam Gleaves on fiddle. Check out these lines: “He’s his own kind of nightmare/Running through the field naked/And they’re catching up too quickly for him to breathe/There he goes into the river where they’re never going to find him/No, they’re never going to find him in his own dream.” There is something pretty about this song. Rainbow Star then switches to guitar for “Please Come,” which she performs solo. She stresses certain lines in this song through repetition, such as “I ain’t never cried so hard in my life for any stupid man” and “I’m sorry I couldn’t save you from the world” and “Please come back to me.” And it is in that repetition that these lines become heartbreaking. Sam Gleaves joins Rainbow again for “No Shoes,” a song with a sweet sound. These lines, in particular, stand out to me for obvious reasons: “And no news in the house, if you can help it/No news, no news, if you can help it/My heart so weary, carryin' the world's burdens/My hope's a-fadin', too many people hurtin'/So please, dear, when you come near/If it ain't too much trouble/No news today.”

“Dyin’” grabbed me with its opening lines: “I think about dyin’/All the time/But I’m really not/The suicidal kind.” She then continues: “Oh no, I’m thinkin’ about death in a healthy way/Thinkin’ about how realistically/I could die today.” Yes, this is more of a live-in-the-moment type of song rather than a depressive I-want-to-give-up-but-can’t-kill-myself type of song. And to prove this sort of playful attitude, this track even includes some whistling. So, yes, I totally dig it, even if in it she reveals that she’s a crazy cat person (oh, sorry, “crazy cat person” is a bit redundant). “Well, it’s only winter for a while/That cold won’t last forever/And it’s only summer for a while/And in the sun we’ll be together.” That’s followed by “Berea,” with Sam Gleaves providing some wonderful work on fiddle. And on this one, Rainbow plays banjo dulcimer and chimes. This track also features backing vocals by Rachel Dorroh, Sam Gleaves, Jane Mecham, Andri Kukas, Sandra Davis, Faye Adams-Eaton, Mirra Shapiro, and Jacob Mudd. For some reason, the rhyming of “Kentucky” with “lucky” always makes me smile.

While most of the songs on this album were written by Rainbow Star, she also delivers a beautiful cover of “Amazing Grace” that becomes quite powerful. Rainbow changes the gender of God to female, singing “The Lord has promised good to me/Her Word my hope secures/She will my Shield and Portion be/As long as life endures.” And why not? This country needs some strong female energy at this point, and I was thrilled to see all those women protesting at the Brett Kavanaugh hearing, their voices strong even as they were being roughly led from the room. That’s followed by “Aquarius,” a pretty song and original composition. Here is a taste of the lyrics: “I woke up ‘cause I was tired/Havin’ fits the whole night through/Grabbed a drink and went to bed/Hopin’ to stop dreamin’ of you.” Then Tyler Devall joins Rainbow on guitar and backing vocals for “Hundred Miles,” and his presence adds much to the beauty of the song. Tyler Devall also plays guitar on “Little Bird,” a song in which Rainbow’s vocals have an ethereal quality. Rainbow returns to ukulele for “T.” “And you separate my layers/And I cannot abide/In all the ways I want you/And all the ways I’ve tried.” The album then concludes with “Blue Skies,” a song dedicated to her cat, the only track I am not all that fond of.

CD Track List
Music From The Rainbow Sparkle Palace: Volume 1 was released on August 17, 2018.
Posted by Michael Doherty at 2:00 PM