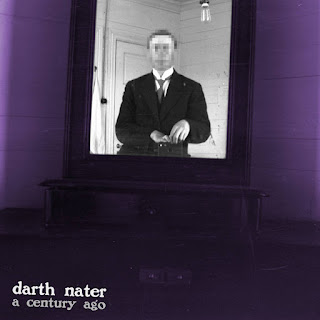 Darth Nater is the project of Buffalo-based singer and songwriter Nate Noworyta. His music is a strange and wonderful type of folk, featuring interesting and unusual lyrics and topics. His latest release, A Century Ago, features songs that take place – as the album’s title suggests – a century ago, in 1917. Yet the subjects are pertinent today. Nate Noworyta has plenty to say, but does so with an offbeat humor that I relish, helping to make this one of my favorite albums of the year.

The album opens with “The Immigrant,” which is the name of a 1917 Charlie Chaplin film. Even if you haven’t seen that film, it is likely that you’ve seen clips and stills from it. This song is a quirky sort of folk that I love. It is told from the perspective of an actual immigrant working as an electrician on Chaplin’s film.  “I’ve got a hunch, I’ve got a gnawing suspicion/No one here has experienced malnutrition/I feel mostly bitter, but I feel a little glad/That there are people in this world who haven’t hurt the way that I have.” This track features some nice work by Alec Miller on clarinet. Those of us who work in film and television here in Los Angeles might appreciate this song even more than those who don’t, as he sings “It’s not magic/I know how it’s done” and “It’s not magic/I know all the tricks.” And then he adds, “But I see old men smiling like kids and just for a moment I believe it exists/Just for a moment I believe it exists.” Wonderful! We can all use a little magic these days. “The Immigrant” is followed by “Great Fire of Thessaloniki,” which begins as a mellower tune with gentle, delicate work on guitar. Then Nate’s vocals take on a stronger, more emphatic tone. This song is about a fire in Greece that left seventy thousand people without homes, and features some good work on guitar. One of the many things I love about this album is the way Nate plays with language and phrases, as he does in these lines: “It’s all Greek to me/This kind of tragedy.”

One of my favorite tracks is “Smokey Joe Wood,” about the baseball player. I love the infectious joy of this tune, of its sound. Plus, it’s about baseball, my favorite sport, and about a player who pitched for the Red Sox (go Sox!) before going to Cleveland. This track even includes a bit of “Take Me Out To The Ballgame,” with Nate adding his own spin and lyrics to it: “Watch out old chap for that patch of wet grass/But you slip and you fall and you stay down/Your hand's in crippling pain/It only takes one strike in this unforgiving life called the old ball game.”  How fucking great is that? And check out these lines: “You can accept your fate, but your stats will still tank/‘Cause you're out, you're out of the game.”  I absolutely love this song, through all the turns it takes. And “Make the most of this sick, sick joke” is the best advice I’ve heard in a long time. That’s followed by “Lawrence Of Tremadog,” and the opening lines about being older (“I’m older than I was last year/I’m older than I was when I said ‘I’m older than I was last year’”) remind me of that They Might Be Giants song “Older” from Mink Car. But the line that I love from this one is “More wars than not, I’m sure, are fought on dishonest grounds.” I love not only the line, but the way that line is delivered. There is an oddly pleasant tone to it. By the way, this song is about Thomas Edward Lawrence (Lawrence of Arabia).

“Bere Ferrers” has a cheerful, jaunty groove at the start that I like. The lyrics, then, come in something of a contrast to this groove: “Captain please/We’ve had nothing to eat since 6 this morning/The boys won’t admit it/But their stomachs are rumbling fiercer than an Albatross engine/Bone thin with fish skeleton ribs/Singing submerged hymns to Poseidon.” It is a song of soldiers in a train station accident, a song of “The weddings that we’ll miss/And the funerals we wish we did.” And it features Alec Miller on flute. It also features more nice play with language, such as this line: “I was sick of home, now I’m homesick.” Another line that stands out is “You are only a human being,” perhaps in part because it is repeated. And these lines really stopped me cold: “By the time the train made it to Exeter’s gates/They were twelve men short and two hours late.” This songwriter is really masterful, in directing just how the listener will feel or react at any given moment. Then “Jeannette Rankin” is a song about the first congresswoman, and it features vocals by a woman calling herself Ukulelephant (first on backing vocals, then on lead for one section toward the end). Some politicians should take heed of these lines: “She spoke to them and she listened/But she listened more than she spoke.” Jeannette Rankin was against declaring war in 1917, and my favorite lines from this song are “The war to end all war/What do you take me for?”

“Fatima” is an interesting song about a spot where some children claimed they saw the Virgin Mary. And, oh god, the line about small pox (“And spread seeds like Columbus spread smallpox”) caught me by such surprise that I ended up laughing out loud (and quite loud – sorry, neighbors). Then in “Silvertown,” the lines that stand out are “I know you’re fighting the good fight/But do you really have to?” And in “The Winter Palace,” the line “Swarms of starving artists, grandmothers and Marxists” for one reason or another makes me laugh. This song directed at Nicholas II contains a spoken word section: “A situation like this cannot last long. I repeat once more – it is impossible to rule the country without paying attention to the voice of the people, without meeting their needs, without a willingness to admit that the people themselves understand their own needs.” Hmm, can you think of a certain mendacious, demented racist who should pay attention to those lines? I also love the last lines of this song: “I don’t know what it feels like to have subjects, let alone ones that revolt/But I’d imagine it’s something like getting dumped by a hundred and some odd million people at once.”

I know I keep mentioning lines that I love, but that is because the lyrics to this album are a large part of its appeal (though certainly not the only element that I appreciate). So, anyway, here are yet more lines that caused me to burst out in joyous laughter (these from “Love Field”): “Down there the people look like scuttling insects/Indistinguishable from the tiny specks of dust on my windshield/Is this how it feels/Is this how it feels to be a god?” And then Nate follows those with, “If I had to guess, it’s probably not.” I love the way the lyrics are sung with exuberance. “All that’s left is the ocean rolling out to infinity/I know it ends, but it’s infinite to me/The closest thing to forever that I’ll ever see.” That’s followed by “The First (And Last) Queen Of Hawaii,” a song with kind of a pretty vibe. The album then concludes with “History Repeats,” in which Nate sings “Stand up, see history repeat/Sit down, see history repeat/Go out, see history repeat/Stay home, see history repeat.” Hmm, perhaps the whole idea of the album is now spelled out in its final song. After all, these songs are as much about the present as they are about the past. And perhaps it’s inescapable. This unusual song includes a spoken word section.