Blue Largo: “Before The Devil Steals Your Soul” (2018) CD Review 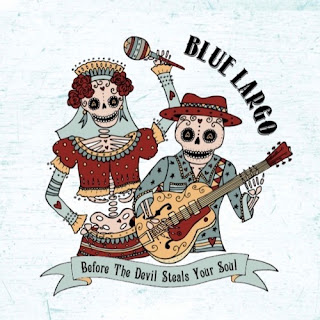 Blue Largo is a band started by guitarist Eric Lieberman and vocalist Alicia Aragon nearly two decades ago. They had to take a rather lengthy break at the end of 2006, while Eric Lieberman worked to overcome focal dystonia that affected his right hand. In 2015, they were back with Sing Your Own Song, and are now following that up with Before The Devil Steals Your Soul, which features mostly original material written by Eric Lieberman. This album addresses our troubles and concerns, but also gives us – or reminds us of – reasons for celebration, for joy. And for that, I am thankful. This is an album I’ll be returning to often. It gives me nearly everything I am craving, needing. It is full of soul and good grooves, wonderful vocals and plenty of sax. The musicians on this release include Marcus P. Bashore on drums, Mike “Sandalwood” Jones on bass, Taryn “T-Bird” Donath on piano, Rafael Salmon on organ, Dave Castel De Oro on tenor saxophone and organ, and Eddie Croft on saxophone, plus several others on certain tracks.

This fantastic disc opens with “Wash Away,” the beginning of which is sung to the accompaniment of organ, the vocals delivered with a lot of soul. The song then becomes a good bluesy number, with some wonderful work on guitar. This song is about the horrid mess our country has gotten itself into. Alicia sings, “Seems these days we’re hanging on by just a thread/All this talk of nuclear war/We might all soon be dead.” But she then follows that line with a more optimistic thought: “But I still want to believe that it ain’t too late/If we just unite, stop preaching all this hate.” I dig the instrumental section too. There is something both timely and timeless about this one. The music has a timeless or classic quality, giving the impression that our current troubles have been going on for a long time. And hell, that’s how it feels, doesn’t it? It feels like Donald Trump and his ugly group of racists have been in power for decades. “I’ve been waiting such a long time for love to return.” Nena Anderson, Missy Andersen and Nathan James provide backing vocals on this track.  Then “If I Can Make It To Augusta” has a more cheerful vibe, and again with a classic sound, which is wonderful. I love the sax, which functions as a voice, almost cheering Alicia on. Jonny Viau joins the group on tenor saxophone. There is also some wonderful work on piano, particularly in that instrumental section. There is optimism here, something we need. “I’m gonna get me a job/And find a good man too.” The way she delivers these lines, I’m certain she’ll accomplish what she sets out to do. And indeed, as the song fades out, she tells us, “I got a good man too/We’re going to settle right down.”

“Monrovia” becomes fun, particularly on the repeated title line, with the backing vocals and horns. Am I crazy or is there a bit of a “Ghost Riders In The Sky” vibe when the vocalists sing, “Monrovia, Monrovia”? Nena Anderson and Missy Andersen provide backing vocals, and Steve Ebner is on trumpet. This song tells a story, and that story turns deadly, proving that no one should go to Monrovia. It’s followed by “Same Race,” another song about the current, depressing state of our country, but a song that should unite people. The chorus is “Black lives matter/Police lives matter/Your life matters/My life matters/We’re all the same race/We are the human race/So please don’t tear us apart,” and – unless you’re a racist prick that voted for Donald Trump – you’ll likely find yourself singing along by the second time it comes around.

The album’s first cover, “Bodas De Oro,” takes things in a different direction, and features some nice work by Taryn Donath on piano. Then “I’m Alive” is a celebration of music, of life, and contains a damn good jam. Steve Ebner plays trumpet on this one. That’s followed by “The Long Goodbye,” which is one of those beautiful, soulful blues tunes in the same realm as something like “It Hurts Me Too.” This one is about losing a loved one to Alzheimer’s. “You started drifting, slowly drifting away/I feel I’m losing you little by little, day by day/And I can’t keep from crying inside/It is such a long goodbye.” Yeah, it’s hard to keep from being moved by this song. It features some wonderful stuff on guitar and on piano. And that sax hits the spot.

Blue Largo delivers a cover of Jimmy Ruffin’s “What Becomes Of The Brokenhearted,” here titled “What Becomes Of The Broken Hearted.” Nathan James plays baritone guitar on this one. That’s followed by another cover, “Feeling Good,” the beginning of which is delivered a cappella, as Nina Simone did it. In general, I prefer the original tracks to the covers on this album, but this song is just so damn cool, so damn glorious. “It’s a new dawn/It’s a new day/It’s a new life for me/And I’m feeling good.” We all want that. And I love that sax. That’s followed by “Grinder’s Groove,” an absolutely wonderful instrumental track with a classic groove and vibe to remind us of what life can be like. Music like this feels like the opposite of Donald Trump’s grotesque world. I love it, and I love that sax!

Blue Largo then gets jazzy with “Five Till Eight,” a song written by Nena Anderson. That’s followed by “Every Time You Call My Name,” a fun, positive tune. The first line is “I really like it when it rains.” That line makes sense here in Los Angeles, but when I was living in Oregon, well, I would have had different feelings about it. The last song listed on the back of the CD case is Nat Adderley’s “Work Song,” and Blue Largo does a really good job with it, with each musician getting a chance to shine. Though that is the last listed tune, there is one more track, “Lose Your Money.” This is an acoustic blues number that is a total delight, with just Eric Lieberman and Nathan James on guitar. Really, this is a solid album from beginning to end.

CD Track List
Before The Devil Steals Your Soul is scheduled to be released on October 19, 2018 on Coffeegrinds Records.
Posted by Michael Doherty at 12:16 AM