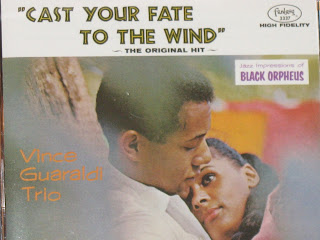 Re-issue of 1962 album includes five bonus tracks, including an alternate take of his hit "Cast Your Fate To The Wind."

The Vince Guaraldi Trio's Jazz Impressions Of Black Orpheus is a wonderful piano jazz album that features music from Black Orpheus as well as two standards and two Guaraldi originals.
The film Black Orpheus, directed by Marcel Camus, was released in 1959. It premiered at Cannes, where it won the Palme d'Or Award. The next year it won the Academy Award for Best Foreign Language Film. The music from the film became quite popular, and Vince Guaraldi began incorporating some of it into his live performances. He recorded a demo of four songs, which became the first side of this album, released by Fantasy Records (which had released Vince Guaraldi's first two albums).

The first track, "Samba de Orfeu (AKA Samba de Orpheus)," has a great opening with drums and bass. Then a minute in, the piano kicks in, bringing a brighter, happier tone. This is a wonderful, playful tune that should bring a smile to whoever listens to it. It's fun and uptempo, and has some excellent work on piano by Vince Guaraldi. It was written by Luiz Bonfa and Antonio Maria.

"Manha De Carnaval" is mellow, sweet and tender. At first, this song is like a light caress, with Colin Bailey keeping a quiet, steady time on drums. It gains in strength, but remains sweet, and delicate in a way. This song was also written by Luiz Bonfa and Antonio Maria.

"O Nosso Amor" has a short mellow introduction, and then a good swinging groove. There is nice work by Monty Budwig on bass, including a solo a few minutes in, followed by a lively drum solo by Colin Bailey. Though the drum solo seemingly comes out of nowhere, it's a totally welcome moment. Vince Guaraldi seems to be having a blast on piano. "O Nosso Amor" was written by Antonio Carlos Jobim and Vinicius De Moraes.

"Felicidade" features some wonderful work by Vince Guaraldi on piano. It's like each note is bursting with the joy of being played. "Felicidade" was written by Antonio Carlos Jobim and Vinicius De Moraes. This is the last of the four songs from Black Orpheus to be included on this album.

"Cast Your Fate To The Wind"

"Cast Your Fate To The Wind" is a gorgeous, joyous song, which has a great spirit and sense of play. It's definitely a highlight of the CD. This song feels like the hope of a new day - the joy, the possibilities.

"Moon River" is an incredibly pretty song, written by Henry Mancini and Johnny Mercer. Everyone is familiar with this one, and there's a reason for its endurance and popularity. This song has always had the ability to affect its listeners emotionally with its sad and pretty tones. And this rendition is able to do that without the lyrics. Who needs vocals, when you have Vince Guaraldi on piano? This song features some of his best work.

This song originally appeared in the film Breakfast At Tiffany's, in which it's sung by Audrey Hepburn. This song has been covered by Lena Horne, Louis Armstrong, Bobby Darin, Johnny Mathis and Eartha Kitt, among many others.

"Alma-Ville"
"Alma-Ville" is a fun and quirky song with a wonderful bass line by Monty Budwig. It features a brief bass solo nearly three minutes in, followed by a drum solo - which is then repeated. There are sections of this tune that are approaching soulful rock and roll in style. This song is another of this album's highlights. "Alma-Ville" was written by Vince Guaraldi.

As a side note, Vince Guaraldi released an album in 1970 by the title Alma-Ville.

"Since I Fell For You"

"Since I Fell For You" is the final track of the original recording. It's a mellow, sweet-sounding song. Then suddenly two and a half minutes in it picks up in pace, with a nice rhythm, and has some excellent work on piano. That section is short, and it then returns to the main section of the song.

"Since I Fell For You" was written by Buddy Johnson. There have been many covers of this song over the years. Lenny Welch had a hit with it in 1963. Eartha Kitt, Doris Day and Bonnie Raitt are among the other artists who have recorded this song.

This CD re-issue contains five bonus tracks, four of which have never been released before. The first track, and the one that was previously released, is the single version of "Samba de Orfeau (AKA Samba de Orpheus)." Being the single, that means it's a shorter version, by approximately two and a half minutes, but it's still a lot of fun. This was the A side track from the single released to promote the album. (The flip side was "Cast Your Fate To The Wind.")

The next three tracks are alternate takes of songs from Black Orpheus - "Manha de Carnaval," "O Nosso Amor" and "Felicidade." And the album concludes with an alternate take of the hit "Cast Your Fate To The Wind." None of these final four tracks have been released before.

The bulk of Jazz Impressions Of Black Orpheus was recorded in February of 1962. "Moon River" and "Since I Fell For You" were recorded in November of 1961. The record was originally released on April 18, 1962.

This CD was released on September 28, 2010 through Concord Music Group. Four other titles from this series were also released on that date, including Miles Davis Featuring Sonny Rollins: Dig, Chet Baker: Sings - It Could Happen To You, Wes Montgomery: Boss Guitar, and Bill Evans Trio: Waltz For Debby.

(I originally posted this review on October 27, 2010 on another site that no longer exists.)
Posted by Michael Doherty at 6:38 PM