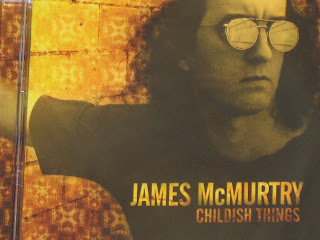 James McMurtry sure as hell can tell a good story. He creates believable and vibrant characters in his songs, as well as good grooves. And he possesses a voice that has a sort of woeful authority. It's a voice of knowledge and experience, and it seems that experience is what compels him to sing and write songs in the first place. Sort of like when Leonard Cohen sings, "I greet you from the other side of sorrow and despair." You feel kind of safe in his hands, in his voice - like he won't lie to you, won't deliberately, knowingly take you astray. No bull, no embellishment - just some truth.

As he sings in "Charlemagne's Home Town," "The fortune teller told me nothing/That I wouldn't have found out on my own."

Childish Things opens with "See The Elephant," which tells the story of a guy asking his father if he can go to the traveling show in Richmond to see the elephant. He's fixed the gate and done his chores, and he's old enough to drive.

It's established as a rite of passage for the boys: "Sister she can't go with me/This is not for her to see/Little brother you'll get your chance/To go down and see the elephant." Then suddenly after an instrumental interlude, the song changes to the idea of impending war. He wants to see the elephant before going. This ties in with the male rite of passage, and the boys at the beginning who were "in their Sunday suits" are now "in their Navy Blues."

This song features a good slow rock groove, and some wonderful work on fiddle by Warren Hood, playing what sounds like a lead electric guitar part.

"Childish Things"
The album's title track is about putting away the trappings of childhood. The first lines are wonderful: "Aunt Clara kept her Bible/Right next to the phone in case she needed a quote."

James McMurtry is adept at describing characters at the edge of transition and change, in different phases of life. In "See The Elephant," a character is looking ahead; in "Childish Things," he's looking back. At the end of "Childish Things," when he's in the present, he sings, "All I want now is just a comfortable chair."

"We Can't Make It Here" is an amazing song with the power to anger and depress. It's a protest song of sorts, protesting the current reality of the nation. What were once called "pessimism" and "cynicism" can now safely and sadly be called "realism."

In a verse that starts in a bar, he sings, "Minimum wage won't pay for a roof, won't pay for a drink/If you gotta have proof just try it yourself Mr. CEO/See how far $5.15 an hour will go/Take a part time job at one of your stores/Bet you can't make it here anymore."

The song is clever in its varying meanings and uses of "make it." From the literal, as in creating a product ("Now I'm stocking shirts in the Wal-Mart store/Just like the ones we made before/'Cept this one came from Singapore/I guess we can't make it here anymore"), to the figurative, as in to be successful, and also to simply survive.

A live version of this song was included on the DVD from his two-disc release, Live In Europe.

"Bad Enough" begins with a series of questions from one person to another, culminating in the repeated, "When you gonna act like you know you should?"

Then the song switches perspectives to the other person for the chorus: "Well it goes all night like a broken record/You know it wouldn't take all that much/To bring me down from all that pressure/I guess you just know when it's bad enough." After an instrumental section and a slightly different version of the chorus, the song then describes the relationship in terms of combat in the second verse.

In "Memorial Day," James McMurtry creates a vivid image of a family gathering for a holiday. The song starts with the family en route to grandmother's house while trying to get the baseball game on the radio. The family is full of hope and excitement - a seemingly solid unit.

But that doesn't last through the second verse, which finds members of the family arguing. "Joe 'n' Mary said not to worry/Said it's just the same old fight/Happens whenever they all get together/Everything's really alright."

Each verse is like a short chapter in their story. By the third verse, Mary is getting hit by Grandma, but "Mary don't cry just stands there and takes it/Doesn't seem to feel a thing." And of course this is Memorial Day, a day designated to honor fallen members of the fighting forces.

The last verse finds the family on its way home, driving in silence. This song provides a great description of a dysfunctional family (which most likely is every family).

"Old Part Of Town" has a good country rock groove, and great piano. This is a tune about returning to another time by returning to another place. Maybe it's an easier, more real place. James sings, "But darlin', I think there's still a time to be had/In the old part of town where your mom met your dad."

Through James McMurtry doesn't seem one to fall victim to nostalgia, it's interesting to see which words he uses to describe the old part of town. He sings, "You can still hear the footsteps of the old mystery/Old part of town/You can still feel the heartbeat of our whole history." The words "mystery" and "heartbeat" give the place a more vital and intriguing feel. But of course it's also an escape from the current reality.

In "Holiday" James McMurtry depicts various characters during a holiday. Like in "Memorial Day," the tone that's created is not one of joy, but of sad reality. It begins with a description of a family on the road, seeing the crosses on the roadside marking deaths from the last holiday. There is still some humor in lines like "The whole thing's arranged just to aggravate Dad." And when describing a truck-driver who is missing everything because of his work, James sings, "He's in for a long holiday," playing on the idea of a long haul.

This song keeps it simple, just acoustic guitar, bass and vocals. It's a beautiful and sad song with which to end the album.

Childish Things was originally released in 2005. It was re-released February 1, 2011, along with his 2004 release Live In Aught-Three.
Posted by Michael Doherty at 2:47 PM