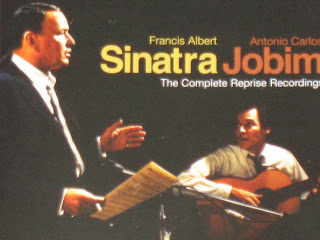 Frank Sinatra and Antonio Carlos Jobim teamed up twice to record albums in 1967 and 1969, and this wonderful CD contains all 20 songs from those sessions.

The first ten tracks of this CD make up the complete 1967 release, Francis Albert Sinatra/Antonio Carlos Jobim. That album was recorded in three days. Jobim was a Brazilian singer, pianist, guitarist and songwriter. The idea was to combine Sinatra's incredible vocals and orchestra with Jobim's rhythms and tones. Most of the songs were co-written by Jobim. The album actually reached #19 on the Billboard chart, and remained on the chart for twenty-eight weeks.

These songs are quiet, sweet, and tender.

"Sinatra/Jobim"
Two years later, they reunited for another release, to be titled, Sinatra/Jobim. The songs were all written or co-written by Jobim. Like the first album, this album was recorded in three nights. It was ready to be released in the fall of 1969. But Frank Sinatra demanded that the album not be released. Some 8-track versions had already been released and sold.

"The Girl From Ipanema"

The album opens with "The Girl From Ipanema," perhaps the most popular Bossa Nova song of all time. And there's a reason for that. It's a wonderful song. How can anyone not love this song? It was written by Antonio Carlos Jobim, Norman Gimbel and Vinicius De Moraes. The song begins, "Tall and tan and young and lovely/The girl from Ipanema goes walking/And when she passes, each one/she passes goes - ah."

"Change Partners" is a beautiful song written by Irving Berlin. It's a simple song about a man who wants to dance with a certain woman who is otherwise occupied. Frank Sinatra sings, "You've been locked in his arms ever since heaven knows when/Won't you change partners and then/You may never want to change partners again." Al Viola plays guitar on this track.

"How Insensitive" is one of the best songs on the album. It's sweet and sad and smooth, with nice touches on the piano. Frank's voice is just so cool on this track. "What can one do when a love affair is over?" Frank asks at the end of the song.

"I Concentrate On You" is a song by Cole Porter, and it's a song that they get a little playful on, especially vocally.

"Baubles, Bangles And Beads" was written by Robert Wright, George Forrest and Alexander Borodine. It's from the 1953 musical Kismet.

"The Song Of The Sabia"

"The Song Of The Sabia" is the first of the songs from the later sessions, and right away a different feel is apparent. The strings are louder, fuller. And Frank Sinatra seems to be allowing just a bit more character into his voice. It's not quite as smooth, but still just as cool.
(But then this is one of the three songs on which Frank Sinatra did not like his voice.)

"One Note Samba" is an excellent song, one of the best on this CD. Check out these lyrics: "There's so many people who can talk/And talk and talk and just say nothing/Or nearly nothing/I have used up all the scale I know, and at the end I've come to nothing/Or nearly nothing." And so the narrator goes back to his first note, a single note, the way he goes back to that one familiar woman, who is his root, his base. These lyrics are great. A wonderful song. "One Note Samba" was written by Antonio Carlos Jobim and Newton Mendonca.

Frank Sinatra Didn't Like His Vocals On Three Songs
The album ends with the other two songs that Frank Sinatra didn't care for (the first was "The Song of the Sabia"). On "Off Key" his voice does sound a bit off at moments. But then again, its title is "Off Key." "Bonita" is a pretty cool song, a love song, like most of the songs on this release.

The following is the track list for "The Complete Reprise Recordings":


Frank Sinatra died May 14, 1998. Antonio Carlos Jobim died December 8, 1994. They both released many albums during their lifetimes. The Complete Reprise Recordings is scheduled to be released May 4, 2010 on Concord Records.

(This review was originally posted on April 26, 2010 on another site that no longer exists.)
Posted by Michael Doherty at 7:22 PM