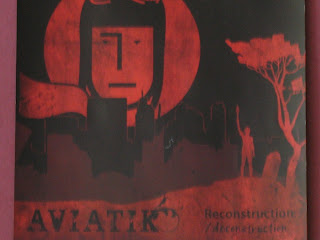 Aviatik's 2010 release is a two-disc "concept album" about one man's fight against dehumanization.

For many people, there is a stigma attached to the idea of a "concept album." That's unfortunate, because a concept album is not inherently a bad thing. And many musicians write on a theme without that stigma. And what does it matter, so long as the music is good and interesting?

Aviatik has put out what is admittedly a concept album. According to the band's own press, the album tells the story of a person who takes a revolutionary stand against the dehumanization of his peers, which eventually costs him his life.

This album is actually two CDs. The first CD is titled "Reconstruction," and it's broken up into three chapters (and a prologue). Chapter 1 is titled "the decieved and the departed" (yes, "deceived" is misspelled), and includes tracks 2 through 7.

"Fear And Firelight" With Sound Effects

The first disc starts with "Fear And Firelight," which functions as the prologue. It begins with some sound effects. Sound effects in music are generally annoying, but they work here. Planes, air raid sirens and explosions immediately place the listener in a war zone, even before the marching drumbeat begins. And almost right away it's apparent that these are talented musicians.

The music on this album often straddles the line between heavy, hard rock and pop. A prime example is "Premonition." The lyrics include this: "I'm living every day like my last/I'm feeling hours alone as they pass/the damage done, the time is lost."

"Finger, Baby (Let It Go)" is fast-paced, with a wild manic guitar in certain sections.

More than two minutes into "Goodnight, Sweetheart, Goodnight," the song relaxes into a soft, quiet moment, which is really nice. The song then eases back into its regular volume and pace. Here is a taste of the lyrics: "Shut your eyes/But when you fall now I won't catch you/Big surprise/No one's holding your hand."

"The Breaking Sound" is one of the best songs on the album. The vocals shine on this one. It's on the mellower side. Toward the end, there is a really good instrumental section - actually, it's not entirely instrumental, as there is some (just barely) audible whispering. When it kicks in, the whispering becomes a sort of radio voice, which is interesting.

The second chapter is titled "Revolution," and it comprises tracks 8 and 9.

"Dead Man's Float" starts with a nice guitar part, and then warlike marching drums kick in. This song works best in its quieter moments.

Chapter Three: "The War After The War"

The third chapter on the album includes tracks 10 through 14.

The song "Milo" contains references to the children's book The Phantom Tollbooth. Milo is the name of the main character in that book. He's a young boy who receives a tollbooth that takes him to a fantastic land of imagination. This is one of the best songs on the album.
It starts off, "It's like we've driven past a phantom tollbooth/The brother watchdogs are counting time/Rhyme and Reason held captive in a castle/But we're doing fine."

"Just The Same"
The first disc concludes with "Just The Same." This song features an infectious pop sound and some really good drumming. The screaming four minutes in and again later is maybe a bit much, but this is a sort of anthem for the album. The lyrics include this: "Breaking down is just the same/As blank submission/Compromise is just the same as giving up." And it ends with, "Rise up, lift your voices/We're not giving up."

The second disc, which is titled "Deconstruction," contains acoustic versions of half of the songs from the first disc. This second disc is a total treat.

The acoustic version of "Goodnight, Sweetheart, Goodnight" really works. The vocals are able to command more attention. The "Hey, hey, give up the fight" part is actually cooler in this version. And the guitar is excellent.

It's interesting to hear a hard rock line played on an acoustic guitar. Surprisingly, it works really well. This version of "Dead Man's Float" shows the beauty of the song.

Aviatik is from Akron, Ohio. The band is Michael Watson on vocals, guitars and keys; Alex Herman on bass; Kevin Gerity on vocals and guitar; and Michael Hausknecht on drums and percussion. Reconstruction/Deconstruction was released on March 19, 2010. An earlier, one-disc version of this album, titled The Reconstruction, was released April 11, 2008. Most of the songs from that release are included on this newer CD.

(By the way, an Aviatik was an Austrian fighter plane that was produced in 1917.)