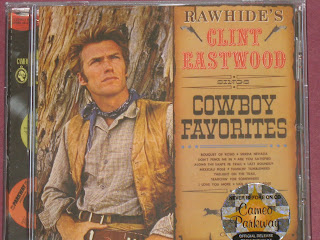 For the first time ever on CD, Clint Eastwood's 1963 record is available with two bonus tracks, those being both sides of the single he recorded in 1962.

Rawhide's Clint Eastwood Sings Cowboy Favorites was recorded on May 13th and May 14th in 1963 in New York. The last two tracks on the CD are from a single that Clint Eastwood recorded in November of 1962. None of this music has been available on CD before.

Clint Eastwood As Rowdy Yates In Rawhide
Clint Eastwood had been appearing in films and television shows since the mid-1950s, but his breakthrough role was as Rowdy Yates on the television series Rawhide. So when it came time for Clint to record an album, it was only natural that he should turn to western music rather than rock 'n' roll.

The album opens with "Bouquet Of Roses." Clint's voice is smoother than one might imagine it being. While there is nothing particularly intriguing or compelling about his voice, Clint is a completely competent singer. And his voice totally fits the feel of this record. Most of the tunes, like "Bouquet Of Roses," are mellow and sweet.

In songs like "Along The Sante Fe Trail," Clint is going for an authentic old western feel, complete with sad-sounding harmonica. "The Last Round Up" was written by Billy Hill, and had been a hit for Harry Lillis "Bing" Crosby in 1933. Clint Eastwood does a very nice version of it.

"Mexicali Rose" was also a hit for Bing Crosby, this one in 1938. It's a pretty song written by Jack Tenney and Helen Stone.

Clint Eastwood's voice sounds really good on "Searching For Somewhere." He's able to have some variations in his vocal performance. It's a pretty cool tune, again with a sad-sounding harmonica. This is one of the best songs on the album.

"Tumbling Tumbleweeds"
"Tumbling Tumbleweeds" is the best song on this album. This is a wonderful song that was written by Bob Nolan, and was a hit for The Sons Of The Pioneers in 1934. Gene Autry's version reached the Top Ten in 1935 (he appeared in a film of the same name). This song was also used in the film The Big Lebowski. Currently, Fur Dixon & Steve Werner do a great version of it. And on this album, Clint Eastwood handles it really well - it approaches beauty. Just a wonderful tune. Here is a taste of the lyrics: "I'll keep rolling along/Deep in my heart is a song/Here on the range I belong/Drifting along with the tumbling tumbleweeds."

"San Antonio Rose" and "Don't Fence Me In"

"San Antonio Rose" stands out on this album as being more upbeat. Clint seems to be having a lot of fun with this one - there is certainly a smile in his voice, which is just wonderful. This song was written by Bob Wills, and is one of the best on this CD.

Clint Eastwood does a really good job with "Don't Fence Me In," a famous Cole Porter song. It was written in 1934, and was a hit for Bing Crosby & The Andrew Sisters in 1944.

The original album concluded with a totally cool version of "Are You Satisfied." This is a fun and playful tune, and it seems Clint Eastwood is enjoying himself on this one. There is also some nice guitar work. Here is a taste of the lyrics: "Do you thrill to his kiss/As you once did to mine?/Is there a chance that you'll regret it/And you'll want me back sometime?/Are you satisfied, really satisfied?/If you are, then I'll be on my way."

The last two tracks on the CD are from a single Clint Eastwood recorded in November 1962. The first, "Rowdy," was written to capitalize on Clint's popularity on Rawhide. (Rowdy was his character's name.) And it certainly features references to Rawhide.

"Cowboy Wedding Song" was the flip side to the single.


A few years after Clint Eastwood recorded these songs, he starred in Paint Your Wagon (1969), which featured him singing. Music has often played an important role in his films. This CD is interesting in that it's truly the beginning of his involvement with music. Rawhide's Clint Eastwood Sings Cowboy Favorites is scheduled to be released on June 22, 2010.

It is one of the six initial classic Cameo Parkway albums to be released through Collectors' Choice Music in conjunction with ABKCO Music & Records. Other releases in this collection include Chubby Checker's It's Pony Time/Let's Twist Again and The Orlons' TheWah-Watusi/South Street.