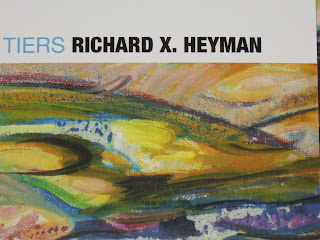 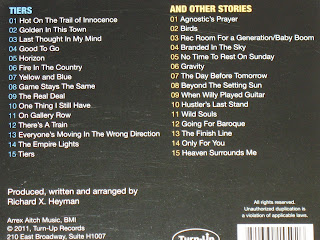 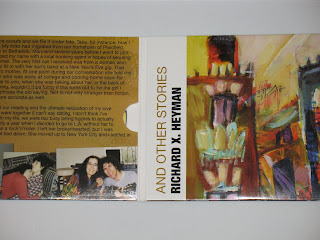 Rather than a double album, Tiers/And Other Stories is two albums packaged together. These two CDs are like a whole universe of music - crossing over musical genres and types with ease and a gleeful disregard for conventions. The results are, for the most part, completely original.

While at times the music presented here might remind one of other singers or bands (elements of his sound are reminiscent of Elvis Costello, Warren Zevon, and possibly even Randy Newman), the comparisons' validity is fleeting (and ultimately immaterial). This release is pure Richard X. Heyman. He produced, wrote and arranged the songs.

The first disc is stronger than the second. Its songs recount the early stages of his relationship with his wife.

"Hot On The Trail Of Innocence"

The first CD opens with "Hot On The Trail Of Innocence." It begins with piano and strings. Richard X. Heyman's vocals have sweet and vibrant tones. He sings, "Don't make me wait so long." The orchestral drums nearly four minutes in are a nice touch. But it's the emotion at the core of this song which is gorgeous and real.

"Golden In This Town"
There is a sudden change in feel with the album's second track, "Golden In This Town." This one starts with a steady drum beat, and has more of a rock feel on the piano. On this one has his voice sounds a bit like Elvis Costello.

Richard sings, "I can't recall now - was it me or was it you/Does it really matter if there's something left to do/We can have tomorrow if you want to talk it out/If it's worth that much for us to find what it's about."

"Golden In This Town" is a love song whose love that has been through a lot. The history of it is heard in the instrumentation, in Richard's voice and every note, as well as the lyrics. This is one of the album's best songs.

"Good To Go" is a wonderful country rock song that is somewhat reminiscent of Warren Zevon's work. Richard's voice is rougher on this one, which is part of what calls Warren Zevon to mind. It begins, "I'm getting tired of the same old same old/I'm mad as hell at the status quo/And that is why I'll be gone tomorrow/I'm good to go." There are also hints of Randy Newman in the lyrics and feel - Randy Newman when he was at his best, that is.

It's a seriously catchy tune - the absolute best of what pop can offer mixed with excellent country elements. There is even a spoken word moment: "I was adrift, if you catch my drift now." This is possibly the album's best song. It's simply wonderful.

The album changes again with "Horizon." Richard's vocals are really amazing on this one. Unfortunately there is a relentless keyboard part, which acts as the sonic equivalent of those animated flashing lights that give children seizures in Japan. Approximately three minutes in, there is a brief respite from it. The song then gets more interesting three minutes and forty seconds in when the drums come in.

"Fire In The Country"

"Fire In The Country" is a quicker-paced tune. This one is really a lot of fun. It has a good rhythm, and some wonderful work on piano, as well some surprising and joyous horns. In fact, the whole song has a very happy feel. Added to that are some excellent lyrics, such as "Chasing the phantom of liberty/Fire in the country/And it's burning/Wild in the country."

"Yellow And Blue" is all about the vocals, with the instruments mostly in the deep background. The vocals are gorgeous and glorious. The focus on the vocals means a focus on lyrics: "If you ever want me, I'm only half a world away." He then asks, "Who's going to love you this much?"

The rhythm during the chorus is catchy. Part of the chorus is, "You'll see the home fires/Yellow and blue/Burn on through the night/Look for the home fires/Like we once knew." "Yellow And Blue" is a wonderful and unusual song. It is another of the many highlights of this CD.

"Game Stays The Same"
"Game Stays The Same" is another song with a catchy pop rhythm. But it has so much more. This is no simple pop tune, though the rhythm is easily accessible and pulls the listener in immediately. But then the world of the song opens wider. This is a song about Los Angeles, with lines like, "Don't you know that illusion can lead to mystique" and "It's true everything is perception."

There is then an odd spoken word section, a letter from Hollywood with references to the smog and lines about how folks don't walk in L.A. and an anecdote about almost meeting Gene Clark. "Game Stays The Same" is yet another excellent tune from this album.

"The Real Deal" is also about being in California, and trying to make it as a musician. Richard sings, "Welcome to the real deal/Shouldn't someone ought to warn ya/How you're gonna get your fate sealed/Out here in California." California referred to as "out here" - making California a distant place - distant from the past, from the rest of the world. California as a foreign territory and landscape is not new to song, but Richard's take has a personal strength.

The song also has a bitter sense of humor, with lines like, "So I handed the man my last tape/How was I to know it was my first rape?" And at the end, the Promised Land becomes the "Broken Promise Land."

"There's A Train" is about journeying home. This song has the positive and bright energy that comes with the knowledge of making the correct decision and going forward. No questions, no hesitation. At times the rhythm mimics a train, particularly on the hi-hat.

The first CD concludes with its title track, "Tiers." This song begins, "Thinking about the early days/A couple of curious and confused kids." It's a look back on the relationship - a sort of summing up of what's come before. "Tiers" is positive and optimistic, a perfect ending to the first disc (with a somewhat grand finale).

"Agnostic's Prayer," the first track of the second disc, begins as a mood piece dominated by strings. Then the vocals come in, large and theatrical. This one calls to mind the Moody Blues at their most grand (moments of Days Of Future Passed). This might be a difficult entry point for most listeners, but it's the second disc, so they'll already have an idea of what they're in for, and they'll know the songs will be varied.

And the songs certainly are varied. For the second song, "Birds," begins like a folk tune. Though it quickly proves itself to be other than a simple folk song. The moment the vocals come in over the guitar the song takes on another dimension, another power.

Richard sings, "Now the days are getting dark." And one gets the sense that the journey might get darker before hitting light again, before regaining the bright optimism that ended the first disc.

"Rec Room For A Generation/Baby Boom"

After a strange, churchly instrumental intro, the song takes on a sort of 1960s pop rhythm, which is perfect for the song's "Baby Boom" title.

"Branded In The Sky"

"Branded In The Sky" is joyful pop rock with some great rock piano. Richard sings, "We're branded in the sky/And I'm just trying to show the way that I feel/Look up to see my loving is real." One incredibly likeable aspect of Richard's music is his unabashed, unbridled and unhidden emotions. Richard X. Heyman doesn't hesitate or compromise. Whatever choices he makes, he goes at with full force. He doesn't hold back. And so some of his music might not appeal to the absolute cynics among us.

"The Day Before Tomorrow"

"The Day Before Tomorrow" is one of the weaker songs on the second disc, mainly because it reminds the listener of other songs and so it's difficult to focus on what this one has to offer. Right when it starts, the instrumental melody sounds a lot like the vocal line of Dobie Gray's "The In Crowd," but slower. (And possibly another song from the 1960s or 1970s that's difficult to pinpoint.) And then when the vocals start, the first line sounds very much like the theme song to Growing Pains. It's just for a moment, but it's hard to shake that television theme from your head once it's in there.

The song does a great job capturing the energy of those times and describing those youthful moments when music first takes control. When everything is important and crucial. And of course the song is also about the current perspective on those times after so many years passing.

"Going For Baroque"
"Going For Baroque" is a wonderful instrumental, as playful as its title. At times it's pretty, and has some interesting changes, like an amusement park ride through history. "Baroque" is generally defined as overly ornate and elaborate. The baroque period was approximately from 1550 to 1750.

"Heaven Surrounds Me" is a sweet and gorgeous song that stays away from overly complex instrumentation. It mostly allows the vocals and acoustic guitar to drive the song.

There is an unlisted, untitled sixteenth track on the second CD. It's a short instrumental with the sound of birds at the beginning.

Disc Two: And Other Stories

The album was mixed by Richard X. Heyman and Nancy Leigh.

The album's artwork is by Jill Stasium, with photography by Heidi Gutman.

Tiers/And Other Stories is scheduled to be released April 19, 2011 through Turn-Up Records.
Posted by Michael Doherty at 2:57 PM