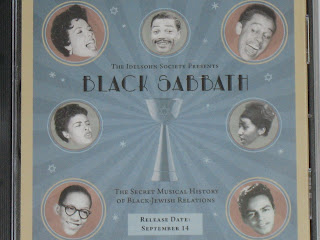 Black Sabbath is one of the most interesting and intriguing compilations of music to come out in many years. It features black artists performing Jewish songs. The recordings mostly come from the 1930s through the 1960s (the Alberta Hunter song being the one exception). There is a lot of great music included here, and what's more, there is a lot of important music included here.

The album opens with Billie Holiday singing "My Yiddishe Momme." This recording is just piano and Billie Holiday's wonderful voice. The recording is from 1956, but sounds much older, mostly due to the background noise. This was a private recording, made at a friend's home. It even has a couple of guys talking at the end. The song was written by Jack Yellen and Lew Pollack. It's a cool tune with which to start the album.

Cab Calloway's version of "Utt Da Zay" begins with some nice backing vocals. And then Cab begins singing, "My mother used to sing to me/A haunting little melody/Nobody knows where it came from/Or where it was composed." From there the song takes off, with that wild Cab Calloway vocal energy. The man could do anything with his voice, and there is of course some wonderful scat. There is also a nice long big band instrumental section. This is a groovy jazzy tune, written by Buck Ram and Irving Mills, and recorded in 1939.

"That Old Black Magic" is likely the most well known song on this compilation. And Johnny Hartman's version is a good version of it too. He mixes in a few other tunes, including one in Yiddish. He then stops, saying to the crowd, "What are you laughing at? Sammy Davis don't even know that song yet." This is a live track, recorded in 1966. The song was written by Harold Arlen and Johnny Mercer.

"Baby, Baby" is a nice old blues/folk song done by Libby Holman with Josh White - just vocals and guitar. It sounds like a terrifically old record, though it was recorded in 1942. It's wonderful that the sound hasn't been cleaned up any more than it has. Enjoy the character of the recording. Even if this song isn't familiar, many of the lines will be. For example, the line "The sun's going to shine on my back door someday" has popped up in quite a few other songs. This song was written by Rainer Limpinsel and Christopher Heimer.

Eartha Kitt provides the most fun song on this compilation, "Sholem," a traditional song recorded in 1959. Some of the music will be familiar to Dick Dale and surf guitar fans. Yes, seriously. A lively and wonderful tune, and at less than two minutes, it's over way too soon.

"Where Can I Go?"
Marlena Shaw's version of "Where Can I Go?" is groovy and hip, with a definite 1960s feel. It also features incredible vocals, especially on these lines: "To the left and to the right/It's the same in every land/There's no place to go." There is also cool work on guitar and drums. "Where Can I Go?" was written by Sigmunt Berland, Leo Fuld and Sonny Miller.

"Sabbath Prayer"
Cannonball Adderley's "Sabbath Prayer" is an instrumental track. It's a slow, methodical jazzy tune punctuated by crash cymbals. This song was from Fiddler On The Roof, and was recorded in 1964.

Aretha Franklin
"Swanee" is a jazzy song with rock piano. Aretha belts it out with joy and exuberance. Holy moly, can that woman sing! "Swanee" was written by George Gershwin and Irving Caesar in 1919, and recorded by Aretha Franklin in 1966. (Al Jolson's version remained at the #1 spot for nine weeks.)

"Dunkin' Bagel" is a silly and fun tune, with a steady drumbeat and some cool work on piano. It was recorded in 1945 by Slim Gaillard Quartet.

The Temptations
The Temptations' "Fiddler On The Roof Medley" appeared on the album On Broadway. It of course features those cool Temptations vocals, and it's got a fun 1960s groove. The medley begins with "If I Were A Rich Man." It then stops momentarily before going into an almost eery version of "Sunrise, Sunset." They then do "Matchmaker, Matchmaker," before going back to that initial cool groove. This track is nearly ten minutes long. Written by Sheldon Harnick and Jerry Bock, this version was recorded in 1969.

This compilation concludes with a gorgeous rendition of "Kol Nidre" by crooner Johnny Mathis. "Kol Nidre" is traditionally intoned at the beginning of Yom Kippur. In the liner notes for this CD, Mathis talks about visiting the temples with his Jewish friends when growing up and how he loved listening to the cantors. This song was originally released as a European single from his 1958 album, Good Night, Sweet Lord. Mathis was only 23 when he recorded it.

(This review was originally posted on July 29, 2010 on another site that no longer exists.)
Posted by Michael Doherty at 7:29 PM