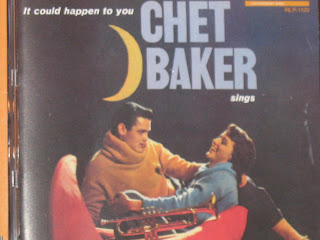 Re-issue contains four bonus tracks, including two that have never before been released.

As one might guess, Chet Baker Sings - It Could Happen To You focuses on Chet Baker's vocals more than his trumpet-playing. Does he have an excellent voice? No, not really. But there is an innocence to it, and therein lies its charm, and he makes it work. He's able to play on his strengths. The album has a wonderful, sometimes sweet, sometimes playful quality.

This recording is from 1958, when Chet Baker was 29 and addicted to heroin. Is his addiction obvious? Certainly not from his trumpet playing on this recording. He sounds like he's in complete control. Most of the songs Chet Baker chose for this release were tunes originally written for musicals, including three by Richard Rodgers And Lorenz Hart.

"Do It The Hard Way"

The album opens with "Do It The Hard Way," a song written by Richard Rodgers and Lorenz Hart for the musical Pal Joey. It features a nice steady bass line by George Morrow. (George Morrow also played bass for Max Roach and Sonny Rollins, among others.)

Chet Baker does a vocal trumpet line. It's not really scat - but is more like him imitating a trumpet solo with his voice. Which is interesting, because Chet Baker is known for his skill with the trumpet. In fact, he's probably more famous as a trumpet player than as a vocalist. That vocal section leads to some nice work on piano by Kenny Drew.

"I'm Old Fashioned" was written by Jerome Kern and Johnny Mercer. It was written for the 1942 film You Were Never Lovelier. This song features more great work on piano by Kenny Drew. This album is Kenny Drew's only recording with Chet Baker, which is a shame, because they sound so good together.

"You're Driving Me Crazy"

"You're Driving Me Crazy" was written by Walter Donaldson for the 1930 musical Smiles. Many versions of this song have been recorded over the years by artists such as Guy Lombardo, Rudy Vallee, Nick Lucas, Billy Holiday, Frank Sinatra, Ella Fitzgerald, Louis Armstrong and Peggy Lee.

Chet Baker plays trumpet on his version, as well as sings. It's his trumpet-playing that excels. His singing is interesting on this one, for he almost mumbles some of the lines. But again, he makes it work. The piano and bass play off each other so well.

"It Could Happen To You"

"It Could Happen To You" was written by Jimmy Van Heusen and Johnny Burke. Chet sings, "Keep an eye on spring/Run when church bells ring/It could happen to you."

On this track, Chet does what would be his trumpet solo vocally. Donnie Richmond plays drums on this song.

"My Heart Stood Still" is the second of three Rodgers & Hart songs on this release. Chet Baker plays trumpet on this one, over a nice rhythm. His horn comes across better than his vocals, which again have a mumbling quality at times.

There is some nice work on drums by Philly Joe Jones and a cool turn on piano by Kenny Drew. This song was written in 1927 for the musical A Connecticut Yankee.

"The More I See You" features Chet Baker on horn. There is some more wonderful work by Philly Joe Jones and Kenny Drew, as well as Sam Jones, who plays bass on this track.

"Everything Happens To Me"

"Everything Happens To Me" is an easygoing tune written by Matt Dennis and Tom Adair. Chet Baker plays trumpet on this track, and his trumpet seems a bit playful over the steady rhythm. As with most of the tracks, a piano solo follows the trumpet.

"Dancing On The Ceiling"

"Dancing On The Ceiling" is the album's third and final Rodgers & Hart song, this one written for the musical Ever Green. In this one, Chet sings vocally what would be his trumpet solo. And like his trumpet solos on this recording, it's followed by a piano solo.

Chet sings, "She dances overhead/On the ceiling near my bed/In my sight/All through the night." The song ends with the lines, "I love my ceiling more/Since it is a dancing floor/Just for my love."

"How Long Has This Been Going On?"

"How Long Has This Been Going On?" is a mellow love song with a good groove. It was written by George Gershwin and Ira Gershwin for the musical Funny Face. Chet's trumpet solo is really good, but seems a bit brief. Dannie Richmond plays drums on this song.

"Old Devil Moon" is the final track of the original release. It is a more uptempo track that begins with drums. It was written by Burton Lane and E.Y. Harburg for the musical Finian's Rainbow. The song has a nice groove and some great work on piano.

This special CD re-issue contains four bonus tracks, two of which (tracks 13 and 14) were never before released.

The first bonus track is "While My Lady Sleeps," a mellow tune which focuses on the vocals, with the piano playing beneath them. the song has a nice late-night feel.

"You Make Me Feel So Young" is a fun upbeat song made famous by Frank Sinatra and Mel Torme. Chet Baker's rendition is really good. On this track he does his version of scat - vocalizing a trumpet solo. That is followed by a piano solo which is fun and playful.

The final two tracks are alternate takes of "The More I See You" and "Everything Happens To Me." Both are slightly shorter than the original versions. This version of "The More I See You" features a nice trumpet solo by Chet Baker. And on this version of "Everything Happens To Me," Chet does some different things vocally. And his trumpet solo sounds sweet and wonderful.