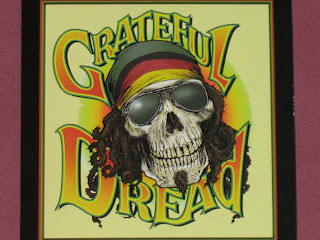 It's interesting how many ways the Grateful Dead's songs can be played and still retain their soul, their meaning, their appeal, their heart. There are many Grateful Dead cover bands out there, performing their music in a wide range of styles. Their songs have been played in a bluegrass style, in Celtic style, in punk and even in a classical symphony style. These songs are truly timeless.

This CD is of live performances of Grateful Dead songs, and one can almost hear the audience dancing.

"Friend Of The Devil"

This CD opens with "Friend Of The Devil," a song that the Grateful Dead had slowed down for concert performances. This Grateful Dread version is somewhere in between the fast version from American Beauty (1970) and the slow concert version. But it has the happier feel of the faster version because of the reggae beat.

"Franklin's Tower"
"Frankin's Tower" is incredible on this album. It has a nice long jam. This song was originally on the 1975 Grateful Dead release, Blues For Allah. On that album and often in concert it was played right after "Help On The Way" and "Slipknot!" though occasionally it was played on its own.

"I Know You Rider"

"I Know You Rider" is almost unrecognizable until the lyrics start. It has such a different feel at first. This is a song that the Grateful Dead themselves covered. It's an old folk song (early on it was done as blues and as bluegrass by various artists). Over the years, the Grateful Dead did this song in various ways themselves. There are early tapes of very slow versions of it. There are also tapes with extra verses that they stopped doing in later years.

So of course this song lends itself well to new interpretations, including this reggae version. The guitar work on this song is excellent. And after the guitar solo, the band breaks the song down for a bit, letting the cool reggae beat drive the audience.

"Cumberland Blues" is such a great song, and the Grateful Dread's version on this CD is phenomenal. This is just total fun. And in the middle of it all, there is a great drum section. It's all rhythm, and it's wonderful.

"Brown-Eyed Women" is another song that sounds very different at first, before the vocals begin. This isn't at a bad thing. In fact, it's one of the wonderful things about the Dead's music, that it can be interpreted in so many ways. And the beginning of this song has a nice, interesting guitar part that is repeated later.

"Goin' Down The Road Feeling Bad"

This is the other song on this album that was not written by the Grateful Dead (the first being "I Know You Rider"). "Goin' Down The Road Feeling Bad" is generally listed as a traditional song, but it was most likely written by Woody Guthrie. This song is famously included in the 1940 film The Grapes Of Wrath. The Grateful Dread do a really cool version of it.

Entrain
The Grateful Dread sprang out of the group Entrain, a band well known for its fun grooves and great rhythms. At some concerts, Entrain would basically do a Grateful Dead set to open the show, calling themselves The Grateful Dread. Since then, there have been changes in band members in both bands. At this point, the only person who is in both bands is Tom Major.

The following is the track list for "The Grateful Dread":


The Grateful Dread put on excellent concerts, and a lot of that energy and fun is captured on this live album. The band generally sticks pretty close to its home in Martha's Vineyard, but has toured around the country too.