Lucky Peterson: "You Can Always Turn Around" (2010) CD Review 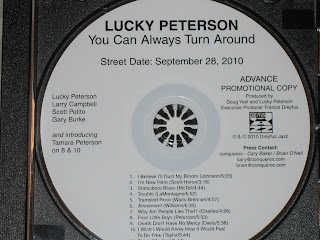 Lucky Peterson's 2010 release features his incredible blues vocals, as well as some excellent work on guitar and piano, and a great backing band.

Lucky Peterson, whose real name is Judge Kenneth Peterson, is an incredible blues singer and guitarist (as well as pianist). His father, James Peterson, owned a club, where Lucky began performing at the age of three. By age five, he'd released his first single, "1-2-3-4," which was produced by Willie Dixon. You Can Always Turn Around is his first major release since 2003's Black Midnight Sun.

Robert Johnson
The album starts off with a great acoustic blues song, "I Believe I'll Dust My Broom," which was written by Robert Johnson. The blues have that odd ability to make people feel good, and this song will make listeners feel great. This song is driven by Lucky's powerful vocals - that wonderfully rough and boisterous voice - and some excellent work on guitar.

"I'm New Here" is more of a folk tune, written by Bill Callahan. It features some spoken word sections, like right at the beginning. From this song's lyrics comes the album's title.

"Statesboro Blues" has a typical blues rhythm, but with an insanely lively guitar over it. This guitar part is barely contained on the album, like a nearly terrifying mythical bird that was cornered briefly, but not captured. It's amazing. This song was written by Blind Willie McTell.

"Trouble" is a sweet and beautiful tune, with some nice work on piano. It's a hopeful song, as Lucky sings, "I've been saved by a woman/She won't let me go." This song was written by Ray LaMontagne.

Tom Waits
"Trampled Rose" is one of those strange Tom Waits folk songs, co-written by Tom Waits and Kathleen Brennan. Lucky Peterson does a really good job with it, adding an exotic tone to it. This song was originally released on Tom Waits' 2004 CD, Real Gone.

Lucinda Williams
Lucky Peterson does a wild and intense rendition of Lucinda Williams' "Atonement." His voice is scratching at the walls on lines like, "Come on, come on/Kill the rats in the gutter." And listen to that guitar. Ooo-weee, this is a great version. This song was originally released on Lucinda Williams' World Without Tears album from 2003.

"Why Are People Like That" is a cool blues tune with folk elements. It's great, apart from the very beginning when he mumbles, "Are you all ready out there? Let's do it." This song was written by Bobby Charles (who died earlier this year) and was done previously by Muddy Waters. Lucky sings, "They take the flesh off your bones/They take the shirt off your back." (Though for anyone who's already lost his flesh, does the shirt matter that much?)

"Four Little Boys" is a fun bluesy tune with great guitar work. It's a catchy song co-written by James Peterson and Judge Peterson, about raising four boys. Lucky starts the song by saying, "Here's a little Peterson history for you, that my grandfather told my father, and my father told me." Lucky himself now has four children. His wife, Tamara Peterson, does backing vocals on this song. A different version of this song was released on Lucky's 2001 album, Double Dealin'. That version featured horn.

"Death Don't Have No Mercy"

"Death Don't Have No Mercy" is an excellent song written by Rev. Gary Davis, and it was one that the Grateful Dead often covered in the late 1960s. This is a nice, slightly restrained version with just vocals and guitar, in which the vocals are allowed to drive the song.

"I Wish I Knew How It Would Feel To Be Free" was written by Billy Taylor and Dick Dallas. It's a catchy, full band song, with piano. It features Lucky's wife, Tamara Peterson, on vocals. Nina Simon released a version of this song in 1967.

The album concludes with a pleasant and sweet-sounding instrumental, "Think," written by Curtis Mayfield.

Lucky Peterson performs the lead vocals, and plays duolian resonator, piano, acoustic guitar and electric guitar. For this album, he put together an incredible backing band.

Tamara Peterson performs backing vocals on "Four Little Boys" and "I Wish I Knew How it Would Feel To Be Free."


You Can Always Turn Around is scheduled to be released September 28, 2010, on Dreyfus Records. It is dedicated to the memory of Francis Dreyfus.