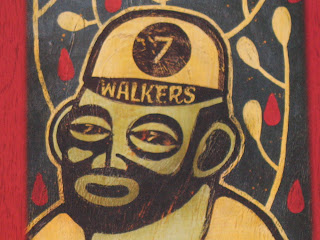 This self-titled debut album from 7 Walkers combines many different types of music, including rock, country, folk and New Orleans jazz. It features Bill Kreutzmann on drums. This new band is the most interesting project Bill has embarked on since the Grateful Dead, the band he is still best known for. This CD features lyrics written by Robert Hunter, one of the Dead's two chief lyricists.

Louisiana is an element common to most of these songs. The state plays a big role in this album, and in fact a dedication in the liner notes reads, "This album is dedicated to the state of Louisiana and the city of New Orleans. It is an open love letter, a message of hope, a prayer for prosperity and a declaration of gratitude. From all of us in the band, thank you!"

The album begins with a track titled "WYAT Radio/Cane River Waltz." It's a silly little introduction with a radio DJ saying, "This is the latest from 7 Walkers." It's a pointless track, but it's only thirty-three seconds, and everything that comes after it is wonderful.

That track leads right into "Sue From Bogalusa," a straight forward country rock tune. It's a fun song that's marred only by the sound of an audience cheering after the line "We're gonna rock all night."

"King Cotton Blues" is one of the coolest songs released this year. It features special guest Willie Nelson on vocals and guitar, with lyrics by Robert Hunter. This song, more than any of the others on this album, sounds like a song the Greatful Dead would have done. It's easy to imagine Jerry Garcia singing this one. (It's along the lines of "Mississippi Half-Step Uptown Toodeloo" and "Loser.")

It has some really nice work on guitar and harmonica. Then it suddenly takes on an eerie carnival feel at the end, which is wonderful.

Here is a bit of the lyrics: "Shotgun is too merciful/Hanging is too good/Drowning is too uncertain/And poison is too slow/To snuff a worthless widow's son/Whose time has come to go."

"(For The Love Of) Mr. Okra" is an instrumental track, the first of three on this CD. A strong bass line starts the song. It's fun, and a bit funky. It has really good groove, with some interesting work on guitar and keyboards over it.

"Chingo!" is a strange song with some folk elements, particularly at the beginning. Interesting rhythms and vocals create a bizarre sonic jungle. George Porter Jr. plays bass on this one, and John Bush plays percussion. The song ends abruptly.

"Louisiana Rain" has a strange, almost eerie feel at the beginning. Then the vocals kick in over a simple bass line. The vocals, with a nice, deep tone, are sung straight into the listener's ear, like a secret, like a late-night confession.

This is a seriously cool song, with blues elements, particularly on the guitar. These is also some great percussion by Bill Kreutzmann. In fact, the only thing that detracts from this song is the rain and storm sound effects approximately four minutes in - they're unnecessary.

"Someday You'll See (Prelude)" is the second instrumental track on the album. It's a great bluesy rock track. It's slow and steady and powerful, with some wonderful variations.

"New Orleans Crawl" is a New Orleans jazz tune that will take you right to Bourbon Street. Of course, obvious parallels can be drawn to the music of Dr. John, as this song has a similar feel, a similar spirit. This track features Steve Johnson on saxophone and trumpet, and Jane Bond on backing vocals.

"Evangeline" is a cool, mellow, beautiful and haunting song. It features quiet percussion - heavy on the cymbals - in the background. The vocals and guitar are to the fore. This song features lyrics written by Robert Hunter, and is not to be confused with another song of the same name that The Jerry Garcia Band used to cover. That earlier song was a Los Lobos song, written by David Hidalgo and Louie Perez.

Yes, the song is actually called "Hey Bo Diddle." That's not a typo, and it's not to be confused with "Hey Bo Diddley," a song that The Animals used to do. This song has a rhythm that combines that of New Orleans with the typical Bo Diddley beat. And it features lyrics by Robert Hunter.

The song begins with an old recording which mentions Huey Long. Huey Long was the governor of Louisiana from 1928 to 1932, and then was a U.S. senator.

"Airline Highway" is the third and last instrumental track on this album. It sounds exactly like what its title describes, and is incredibly short. It builds and fades all in just over a minute.

"Someday You'll See Me" is a nice folk tune with great vocal work by Papa Mali.

The album concludes with "7 Walkers," putting this band in the company of They Might Be Giants, I See Hawks In L.A., Bullied By Strings, Kajagoogoo and Bad Company as bands that have a song title sharing their name.

The song has a cool tribal feel, and a joyous spiritual vibe.


This CD is scheduled to be released on November 2, 2010, through Response Records.