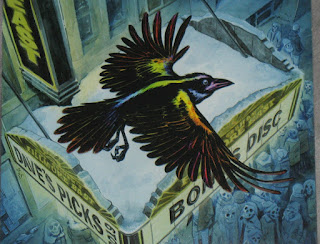 It opens with the first song of the early show, “Cold Rain And Snow,” which suffers from some sound problems. They make some adjustments before going into the second song of the night, “Alligator.” But still there are troubles with the mix, with Pigpen’s vocals not being prominent enough at first. (Dick Latvala used to include a caveat to make us aware of any sound problems before we even put the disc in; it might be helpful if Dave Lemieux would do the same.) But soon things seem to be worked out, in time for the short drum solo. The jam back into “Alligator” is really cool, with Bill and Mickey continuing to play almost like they’re still doing a solo, with the guitars beginning to explore over that. And soon things begin to cook. During the jam, the band dips a bit into “China Cat Sunflower” for a moment, a cool surprise, and then into “Goin’ Down The Road Feeling Bad.” I love these moments. Things then get into weirder territory with “Feedback,” the forerunner to “Space.” How far out can you go, while still being able to make it back? The Dead were always pushing boundaries in that regard, and delighting and sometimes scaring those who were tripping as they did.

The disc then moves to the late show, beginning with “Casey Jones,” which also has sound problems at the very start. Oh man, didn’t they fix that in the early show? Well, it isn’t long at all before things are settled, and this version moves along at a good clip. A great opener for the late show. That’s followed by “Mason’s Children,” with the band explaining the origin of the song, that itself being rather unusual. When did the Dead explain anything? The jam to this version really packs a punch. We then move forward to later in the second show for “That’s It For The Other One,” the crowd cheering as “Cryptical Envelopment” begins. The drum solo comes on fast, and is really good. As with the other show, they deliberately get quieter at a certain point so that there is more room to explode into “The Other One.” And “The Other One” opens with a serious force, a jolt that might push you backward, or thrust you forward, depending on your innate curiosity and excitement. This is an excellent and thumping and unbridled rendition, with enough energy to power a small country. After the second verse, the song eases back into “Cryptical,” which itself explodes toward the end. A fantastic “That’s It For The Other One.” From there, the band goes into a groovy version of “Cosmic Charlie,” with some wonderful harmonies. It ends on  rather sweet note, which I like. There is a bit of banter with the audience following that, with Bob saying “You’ll take what you get.” The disc concludes with “Uncle John’s Band,” which has a somewhat awkward start, but is still sweet, the vocals driving the song.