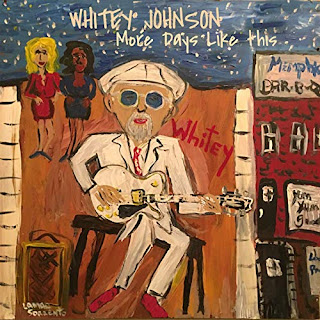 Bluesman Whitey Johnson is in a fierce and unnatural competition with singer and songwriter Gary Nicholson, even deciding to release his new album, More Days Like This, on the same date as Nicholson’s new disc, The Great Divide. Rumors that they are both actually elements of a single fragmented personality have not yet been confirmed, though they’ve never been seen in the same room together and reportedly founded a Fight Club (though neither talks about it). So there’s that. More Days Like This contains material written or co-written by Gary Nicholson. Joining Whitey Johnson on this release are Colin Linden on guitar, Lynn Williams on drums, Mike Joyce on bass, Dennis Wage on piano and organ, Kevin McKendree on piano and organ, Dana Robbins on saxophone, and Quentin Ware on coronet and bugle, along with some other special guests.

This blues album opens with one of the brightest, most cheerful lines, “I woke up this morning with you in my arms.” Is there anything better than that? As Whitey Johnson says, his music is feel-good blues, and this sweet and joyful love song, the album’s title track, has a classic soul vibe, guaranteed to make you feel good. “I want to have more days like this/And more nights like that.” Ah yes, I know the feeling. Then we get a really nice lead on horn. The McCrary Sisters join Whitey Johnson on backing vocals, apparently unaware of the competition between Whitey and Gary, for they sing on Gary’s new album too. “More Days Like This” is followed by “Starting A Rumor,” which also has something of a sweet sound. “I’m starting a rumor about you and me/That we’ve been seen out doing crazy things.” As I mentioned, these are songs that should make you feel better, and we can certainly use more of those during these disturbing and dark days. This track features some enjoyable work on keys. Perry Coleman joins Whitey Johnson on vocals for this one. “Starting A Rumor” was written by Gary Nicholson, Delbert McClinton and Guy Clark (Guy Clark is one of the many talented musicians we lost in that foul year, 2016, the year the darkness took over). Delbert McClinton included his own version of this song on his 2009 release, Acquired Taste.

“Soulshine” has a fun, light vibe right from the start. And any song that includes the phrase “My goodness gracious” is certainly one that won’t bring you down. And this song has that phrase twice. So there. “Everything’s a little brighter with you by my side.” Yes, indeed! Then “Friction” is a groovy bluesy song that kind of pops, and may very well get you moving. Colin Linden provides backing vocals on this track. That’s followed by “If It’s Really Gotta Be This Way,” which has a classic soul sound. It’s a sad and moving song of understanding and love, of loving and letting go. “If this is what you think you need/Go ahead, girl, and do it/It doesn’t make a lot of sense to me/But if it’s what you want, I’ll live through it/I’ll cry, but I’ll get by/And I’ll forgive you, girl, by and by/I’ll forget you someday/If it’s really gotta be this way.” This is one of my favorite tracks of the album. Then “The Blues Is Alive And Well” has a force, a power, felt from its opening moment. The power is in the vocals and the music, the song featuring a steady, strong beat. But the horns are what really excite me, and feel like they’re driving the tune. This is a song that was previously recorded by Buddy Guy.

Gary Nicholson’s new album, The Great Divide, touches upon many important matters that currently concern our national consciousness. On Whitey Johnson’s album, the track that comes closest to that vibe is “Skin Deep,” a song that was also previously recorded by Buddy Guy. In these twisted days where we are faced with a president who is a white supremacist, and racists like Mark Meadows and Ron DeSantis in positions of power, a song like “Skin Deep” is needed. In this song, Whitey Johnson reminds us, “We all got to be careful how we treat one another/Because it’s skin deep, skin deep/Underneath we’re all the same.” The McCrary Sisters join him on vocals for this one. That’s followed by “Upside Of Lonely,” a kind of playful, fun blues tune with a good groove and some cool work on harmonica. That’s Delbert McClinton on harmonica. This track also features some nice stuff on keys. Toward the end, there is a spoken word section: “Push a button and it cooks it for you, no talking back.” This song has been recorded by Foghat and Tom Hambridge. (Hambridge co-wrote it, as well as “The Blues Is Alive And Well” and “Skin Deep.”) “Hold What I Got” is also fun, with a bright energy. Jason Eskridge provides backing vocals. The disc then concludes with a rocking blues tune, “High Time,” written by Gary Nicholson and Seth Walker. Walker included his own version of this one on Gotta Get Back. Whitey Johnson’s version is heavier, and features horns. “It’s high time we had a high time together.”

CD Track List
More Days Like This is scheduled to be released on June 7, 2019.
Posted by Michael Doherty at 9:13 PM