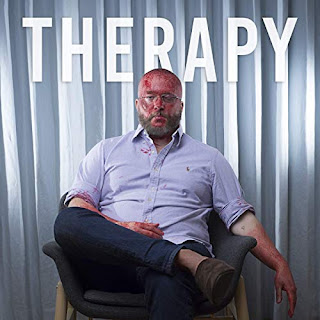 Therapy, the new release from Radical Face, is an interesting album. It’s an EP, sort of, except that it contains forty minutes of music. It’s just that it contains the same six songs twice, like two versions of the same EP. So call it an EP, call it an LP, it doesn’t really matter. What matters is that these songs are good and compelling, somewhere in that realm between folk and pop. Radical Face is the project of Ben Cooper, who has been recording under that name for more than fifteen years. He basically does it all himself, and on Therapy, he wrote all the tracks, produced the music, and plays all the instruments, with the exception of the strings, played by Joshua Lee. As for the album’s title, is it suggesting the music here is therapy for the artist, or for us, or for both? I’m guessing the last, which is good, as we could probably all use a bit of therapy these days. And what works better than good music? The more I listen to this disc, the more I am struck by what an excellent songwriter Ben Cooper is.

The disc opens with “Doubt,” a pop song that has a gentle vibe, perhaps to help soothe us, perhaps to help him. Its opening lines grab me: “Staring into the sun/Always looking for an answer/When I know there isn’t one.” (Though the line about staring into the sun reminds me of that image of Donald Trump looking directly at the sun, one of his many moronic moments.) There is something oddly catchy about this song. “Drifting through another day/Can’t connect to what’s around me.” The second version of this song has a slightly rougher quality, which I like. I think I actually prefer this second version, though both are quite good. “I don’t know who to call my friends/I don’t know how to choose my sins/I don’t know how much more I can bend.” Yet there is a hint of optimism in this song, and perhaps a hint is all we can hope for, perhaps all we need. We’re all hanging in there, right?

“Doubt” is followed by “Hard Of Hearing,” which offers an intriguing combination of pop sounds and intimate, confessional vocals. The lyrics to this one are excellent. Here is a taste: “I memorize the ceiling with the fire at my feet/While I give myself advice that I can’t keep/I no longer ask myself what any of this means/I just want my mind to quit so I can finally fall asleep.” I think those are lines many folks will be able to relate to, and Ben’s voice is like a friend in the void. Songs like this one show just how good pop music can be. The second version begins more as folk, and has a sweet vibe. These are like songs from the edge, where so many people dwell these days. “I know I’m not well, but I’m all right.” “Personal Giants” is another captivating song, a song that seems to reach out to the listener. “When I was lost/You stood there, silent/And kept the light on inside me/And when I broke down/And all the world turned to grey/You told me time would be gentle.”  This is a gorgeous and engaging song, one of my personal favorites. The alternate version is a slightly more stripped down rendition, delivered on acoustic guitar, and is also beautiful. Then “Guilt” begins with drums, establishing a good, solid groove before his tender vocals come in. This one has a fuller pop sound, but still with a passion at its core. “And once you see what lies behind a mask/That mask will never look the same/And once a pattern shows itself/You can’t pretend that nothing’s changed.” The second version begins quite differently, on acoustic guitar, though it does develop a beat. This version is somewhat shorter.

Interestingly, it is the first version of “Better Days” that is delivered on acoustic guitar. “I know right now it feels like hell/And nothing’s going all that well/When it’s always raining in your head/And it’s hard to see beyond your bed/Just remind yourself/That it’s probably gonna take some time.” I love the intimate, honest vocal delivery, at moments his voice supported by just acoustic guitar, and then gorgeous swells of strings. Here he offers hope, telling us again to hang in there. “There are better days to find.” The second version is then delivered on piano and strings. Both versions are beautiful. Then “Dead Ends” begins with strings and guitar, and immediately addresses hope directly, as if personified: “Hello, hope, it’s been a while.” There is a beautifully sad tone to this, though not quite defeated. “I thought I was damned to watch life through my hands/No, I’m not in the place I thought I’d be/Makes looking back a whole lot simpler.” But then there is a positive spin, sort of, as he sings “Well, there’s no need to run when you’re traveling down the wrong road.” I love that line. Actually, this song has so many good lines, I could quote the entire thing. It’s probably best that you just pick up the CD and listen to it for yourself.