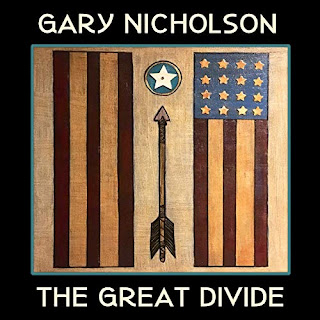 It’s depressing the way Donald Trump and his racist regime dominate the discourse in this country, and determine the mood of basically everyone I know. It is inescapable, unless you somehow manage to turn off your brain completely. I’m looking forward to the time we can put Trump and his disgraceful administration in the past. But right now we are chin-deep in the mire. Gary Nicholson’s new album, The Great Divide, addresses many of the aspects of the immense problem our country is facing. While he doesn’t shy away from important points in these tracks, Gary Nicholson manages to deliver an album that is optimistic, positive and human. These are songs to unite, rather than further divide our nation, a gargantuan task if there ever was one. Joining him on this album is John Jorgenson on, well, just about every instrument you can think of – acoustic guitar, electric guitar, resonator guitar, 12-string guitar, bass, percussion, lap steel, mandolin, electric piano, organ, autoharp and saxophone. Also, backing vocals. But he does leave a few openings for special guests on various tracks.

The Great Divide opens with “God Help America,” a striking take on “God Bless America,” with lyrics that speak to our current troubles and the way the country has become completely divided. The 2016 election, as you are undoubtedly aware, resulted in the destruction of friendships and even marriages. Families stopped talking. There were a few people I cut out of my life, for I just couldn’t stomach the thought of being near anyone who could support a mendacious, incestuous, narcissistic, racist criminal like Donald Trump. I’m looking forward to the end of this administration for many reasons, but one of the main reasons is so that the healing can begin. This country is in desperate need of healing, and that is what this song is about. Here is a taste of the lyrics: “God help America/Show us the way/Stand beside us/Oh, and guide us/So we no longer go astray/Let the faces/Of all races/Be one nation/In your light/God help America/Through the darkest night.” Ruthie Foster joins Gary Nicholson on vocals for this one (and sings the lines I quoted).

“God Help America” is followed by “Soft Spot,” a lighter, sweeter tune, its sound having a friendly, joyful vibe, though the lyrics are still serious and relevant, about helping our fellow man. “Oh, ‘cause I’ve been down and I’ve been out/Know all about living hand to mouth/Could be me by the side of the road with that cardboard sign/I’ve got a soft for people on harder times.” I really love the whole feel of this song, particularly that electric piano and autoharp. Then “Trickle Down” is a good folk tune about the fallacy of so-called “trickle-down economics.” It has been proved already that it doesn’t work as the politicians promised it would, but of course that doesn’t stop them from making claims about its efficacy. After all, those making the claims are the ones who will actually benefit. And after recent revelations about a certain president’s taxes, these lines stand out: “You see, the big boys don’t pay taxes/So they’ve got plenty to spare/And they’re looking out for the little man/And always treat him fair.” Jim Hoke plays harmonica on this one, and on the following track, “Immigrant Nation.” It is interesting to me that folks need to be reminded of this fact, but they certainly do, that “We are an immigrant nation/That’s what we are/That’s the way we made it/That’s how we came this far.” This is a good and cheerful and positive folk song. In addition to harmonica, Jim Hoke plays accordion on this track. Lynn Williams is on drums and percussion. Then the lines from “We Are One” that stand out for me are “Don’t you want to look into a stranger’s eyes and see yourself looking back/Don’t you want to feel beneath your skin that all our differences are nothing in the face of love.”

Carmella Ramsey joins Gary Nicholson on fiddle for “The Troubles,” a song in which Gary sings “The blue and the grey, and the black and the white/All seeing so red that they won’t see the light/They keep making war to try to make peace/So it goes on and on, and it never will cease.” Siobhan Kennedy provides some good backing vocals. That’s followed by “Blues In Black And White,” a blues tune about racism, featuring Kirk “Jellyroll” Johnson on harmonica. Then “Nineteen” is a folk song about a young man joining the military after the horror of September 11, 2001. Dan Dugmore plays steel guitar on this track. Gary Nicholson leaves us with a positive and sweet-sounding song, “Choose Love.” It is not always easy to do that, to choose love, these days, but it is definitely the answer, definitely the path we should strive to take. “When you’re doubting your direction/And you feel like giving up/Choose love.”

CD Track List
The Great Divide is scheduled to be released on June 7, 2019 through Blue Corn Music.
Posted by Michael Doherty at 2:36 PM