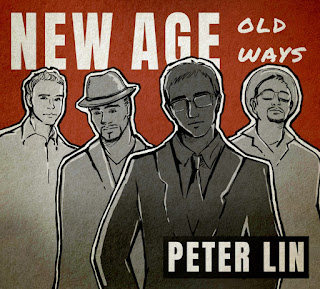 Last year, trombonist Peter Lin released his debut album as band leader, With Respect, backed by a band called The Lintet. That album featured mostly covers of Chinese and Taiwanese popular music, with one original tune. Now Peter Lin has followed that with New Age Old Ways, which features original compositions.  Apart from drummer Nic Cacioppo, the band on this release is different from that of the previous album. Beside Peter Lin and Nic Cacioppo, the quartet (known as The TNT Quartet) includes JD Allen on tenor saxophone and Ian Kenselaar on bass. By the way, there is a comic book that goes along with the album, but my copy did not include it.

The disc opens with “A Path To Understanding,” a tune about reaching out to others, something that is increasingly difficult in today’s completely divided country. I particularly like the percussion on this track, which has a great, loose feel, reminding me of some jazz music from the 1960s (it has that sort of vibe, you know?). I think music can help us through these dark times, but perhaps it also can unite us, heal us. Worth a shot, right? This track seems to indicate it’s possible, the horns offering optimistic and sometimes soothing voices. That’s followed by “Celestial Being.” The bass takes a lead spot early on this track, like the deep voice of that celestial being, and then that voice is joined by that of the horns, and they engage in a delightful, animated conversation. Ah, what is being discussed here? Life, the future, the past? Everything, perhaps, and it will all turn out well. This tune moves at a good clip, possibly because there is so much territory to cover, or possibly because of the excitement over the conversation taking place at all. This track includes a delicious drum solo toward the end.

The title of “New Age, Old Ways” reminds me just a bit of the title of Leonard Cohen’s New Skin For The Old Ceremony. I’m not sure this is really a new age anyway. We seem to have taken some giant steps backward since 2016. Still, the old styles and ways never cease to be relevant. They sort of become incorporated into whatever happens next. I’m not sure anything is lost. Certainly not when listening to this track, which has a wonderful classic quality. Again, I love that loose playing on drums, and the way the horns blow with an unbridled passion, something that should never go out of style, something that should always speak to us. That’s followed by “Akong,” a mellower, more thoughtful piece, delivered with care and love. Then a good rhythm is established to get “Song Of The Amis” underway, and the horns come in like giving a glorious benediction to a sunrise or something. There is joy in this music, and it feels like soon everyone is invited to take part in the celebration.

“TNT Theme” is a lively, exciting number that pulses and breathes and moves freely. And in those moments when the horns join forces, things become even brighter. There is a brief drum solo near the end. That’s followed by “Red Label,” which has a kind of sly vibe, sounding like a detective who’s had probably six or seven drinks and is spying on his own wife while she gets ready for bed, she fully aware that her husband is watching. The bass is the star of the tale here. And when Peter Lin comes in, it’s like he’s commenting on the whole scene or playing along, or maybe the trombone is the wife later explaining her husband’s behavior to a friend. Yes, I totally dig this track. The disc then concludes with “Mantis Shrimp,” a lively and fun tune, like a room full of people on cocaine, each telling you what he or she considers the most amazing story ever, and somehow they’re all right, and you can groove with it because you’re really high and you stole money from each of them earlier in the evening so it’s all rather humorous to you at this point. And the stories are all combined at some point to become one fantastic tale. This track features some really good drumming, while the horns work in conjunction to finish the great story.