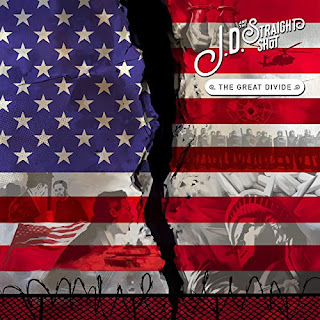 There’s no question but that the incredible division without our nation is weighing on people’s minds. At least two artists are releasing albums titled The Great Divide this year. Coming out in June is Gary Nicholson’s The Great Divide. Out now is The Great Divide by J.D. And The Straight Shot. I was first turned onto this band during the release of Ballyhoo! at the beginning of 2016 (at that point, we had no idea just how terrible that year was going to end up being). I was struck by the group’s songwriting talent, by the vocal work, and particularly by Erin Slaver’s work on violin. The band’s new album is even more exciting, featuring a lot of excellent original material. The band is made up of Jim Dolan on lead vocals and guitar; Erin Slaver on violin and backing vocals; Byron House on upright bass and banjo; Marc Copely on guitar, mandolin, and backing vocals; Shawn Pelton on percussion; and Carolyn Dawn Johnson on guitar and backing vocals..

The album opens with its title track, “The Great Divide.” It feels like the country is permanently divided at this point, and this song addresses that division. “In the morning, I get the news/So hard to know, know what’s true/Always someone telling you/How to feel, and what to do/I know you care and it feels unfair/But all this hate will never repair/The Great Divide.” It’s difficult, because I have found that Trump supporters refuse to listen to reason and logic and facts, and seem to wish to remain willfully ignorant. How do you reach out to people like that? I don’t even want to anymore, I have to admit. I am tired of being so angry, but do the racists who support Donald Trump deserve anything but our hatred and contempt? I’m not sure. But J.D. And The Straight Shot do seem to offer hope, hope that we can unite. Even the album’s artwork seems to suggest that. Though the flag is torn down the middle on the cover, inside behind the CD tray the stripes are intact, and the CD itself has the stars pictured on it. “The Great Divide” is a powerful song, and I love the violin work in the second half.

Though the album opens with a song about our country’s troubles, it doesn’t remain focused on them. “Dead Men Tell No Tales” is a groovy, exciting bluesy number about doomed sailors, featuring passionate and powerful vocals. And actually, the first lines are delivered a cappella. I also love that delicious thumping beat. This is one of my favorite tracks. That’s followed by “It Must Be Night,” which has some cool work on banjo. When it kicks in, we are treated to some compelling backing vocals and some glorious work on violin. This is another strong track. Really, this entire album is strong. This band constructs some intriguing songs, songs that keep you engaged. Take “Invisible,” for example, which might seem like a simple, sweet love song, but which musically goes in exciting, surprising directions, and again features wonderful vocal work. “We’re invisible/Wrapped in starlight/I look in your eyes/We own the night.” Then some beautifully sad violin work begins “I Should’ve Known,” along with some nice playing on acoustic guitar.

There is something rather playful about “Bees,” particularly in the lyrics, which begin “Bees can give you honey/If honey is what you need.” This song caught me by surprise the first time I listened to this disc. By the way, it contains a reference to Romeo And Juliet in the line “A rose by any other name would not smell as nice” (though it is to the poor Q1 reading rather than the preferred Folio reading of “A rose by any other word”). That’s followed by “Anything But Love.” What I love about this one is that great, rising violin part toward the end. There is a bit of a 1970s vibe to this one, right? And to the next track too, “Take It Slow.” Something about the sound makes me happy, its relaxed, cheerful vibe, and its beautiful harmonies, especially on its title line. Plus, there is more wonderful stuff on violin. This band is good.  I might have mentioned that. “Walkin’ On A Wire” has a lively sound from the start. “East coast, west coast, around the world again/No matter where I go, I’m back where I began.”

The album concludes with a couple of covers, beginning with The Turtles’ “Happy Together.” While I do like this song, one line has always bothered me: “The only one for me is you, and you for me.” He’s saying the exact same thing twice. It should be “The only one for me is you, and for you is me.” Anyway, that being said, J.D. And The Straight Shot do a really good job with it, staying close to the original feel. That’s followed by a cover of the The Allman Brothers Band’s “Jessica,” that famous and beloved instrumental tune. I can firmly get behind this tune, without qualification, and J.D. And The Straight Shot’s rendition is a delight. These guys really dig into this one, and there is a tremendous amount of joy to their playing, especially that mandolin. What a wonderful ending to an excellent album.