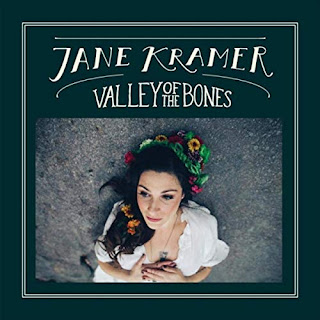 Things are a mess out there, and I fear they are going to get worse, as Donald Trump is going to see winning the next election as his only way of staying out of prison. So often we need some respite from the news, some avenue toward something prettier and more honest, and Jane Kramer’s new release, Valley Of The Bones, provides exactly that. This is her third full-length studio release, following 2016’s Carnival Of Hopes. All of the songs on this album are originals, written by Jane Kramer. Backing her on this release are Criss Rosser on guitar, keys, harmonium, octave mandolin and backing vocals; Eliot Wadopian on upright bass; River Guerguerian on drums and percussion; Billy Cardine on dobro; Nicky Sanders on fiddle; Franklin Keel on cello; and Allison Hall on backing vocals.

The album gets off to a good start with “Hymn,” which has a gentle, sweet vibe. There is something so pleasing about Jane Kramer’s voice, which has a friendly, bright, honest sound. It’s a voice you want to spend time with. This track begins in a somewhat mellow place, and then builds from there, developing an uplifting folk sound. “And before I meet my maker, I want to make something of this mess/But I ain’t wasting time in a scratchy Sunday dress.” That’s followed by “Waffle House Song,” a tune with a good, cheerful groove and some wonderful work on dobro. Then “Macon County” has a sweet, friendly folk sound. This song also has some really good lyrics, such as these lines: “Left a blank sheet of paper on the table/Because I couldn’t find the words.” Those lines stand out for me each time I listen to this album. And check out these lines: “He don’t ask nothing from me/And that’s what I like/I caught myself putting lipstick on last Friday/Just in case I smiled.”

“Child” is a gorgeous and moving song, Jane’s vocals supported by piano. This one too features some excellent lyrics, such as these: “Inside I’m gutted/I am grieving/A tiny unnamed someone shaped like you/Oh, I am not a doctor/I am not a man of god/I am a woman who has gotten some things wrong/And kept on trying.” And then of course the strings are wonderful. This is one of my favorite tracks. “Two Broke Kids” is kind of adorable, and makes me happy, even if the character in the song had to do some suffering. “They’ve got no idea how much hurting I had to do/To be the girl in your songs/But I ain’t worried about you long as I know you’re singing.”

“I’ll See Your Crazy And Raise You Mine” is a song that should appeal to a lot of folks. I figured, just from its title, that I would enjoy this song, and I wasn’t wrong. It is a playful and sweet song, with a fun rhythm. Here is a taste of the lyrics: “We started kissing, and we haven’t stopped/For twenty-three miserable years/I wore your ex-wife’s wedding dress/I dyed it purple like an Easter egg.” There is also a really nice instrumental section, featuring some good work on bass and fiddle. “Valley Of The Bones,” the disc’s title track, is beautiful and engaging, and features more good work on strings. It also has excellent lyrics, such as “My belly’s full of shouting ghosts tonight” and “When you realize you don’t own anything/The things you lose hurt less.” The album then concludes with “Wedding Vows,” yet another beautiful and moving song. “Finding you means I was never lost.”

CD Track List
Valley Of The Bones was released on March 1, 2019.
Posted by Michael Doherty at 7:18 PM