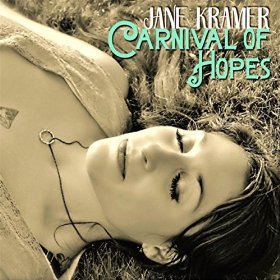 Jane Kramer’s new album, Carnival Of Hopes, is full of sweet, beautiful, honest songs in the folk and country realm. This is her second release, following 2013’s Break And Bloom, and contains mostly original material, written by Jane Kramer. These are songs I liked a whole lot the first time I listened to this CD, and which I appreciate more and more each time through. On this disc, the singer/songwriter is backed by Pace Conner on guitar, ukulele, mandolin and backing vocals; Michael Evers on dobro, banjo, mandolin and backing vocals; River Guerguerian on drums; and Eliot Wadopian on upright bass. And she has some special guests on certain tracks, including Nicky Sanders (of Steep Canyon Rangers), Franklin Keel (of The Blue Ridge Orchestra) and Chris Rosser on piano and harmonium. This CD was recorded at Sound Temple Recordings Studios in Asheville, North Carolina.

Nicky Sanders joins Jane Kramer on the opening track, “Half Way Gone,” his fiddle announcing itself right at the start, adding to the bright sound of this delightful country and folk tune. “Babe, I’m so tired of missing you while you’re next to me.” There is a great lead section by Nicky Sanders on violin halfway through the song. I also really dig the bass line on this song. “I just want you all the way here instead of halfway gone.” That song is followed by the title track, “Carnival Of Hopes,” a pretty and emotionally engaging folk song that creates a strongly defined character through some good lyrics. Check out lines like “Just a woman getting older, holding a fraying rope” and “This fellow here knows I like whiskey, he don’t know nothing about my heart.” This is one of my personal favorites. Jane’s is a voice I trust, and when she sings “But I promise we’ll be fine” on “Your Ever-Green Heart,” I believe her.

Interestingly, she opens the next track by claiming to not be a good woman. “I lie and I cheat,” she tells us in “Good Woman.” This is another really strong and moving song, another of my favorites, in large part because of Jane’s passionate and vulnerable vocal performance. But it’s also because she creates a compelling character. Early on, she sings, “And I ain’t striving for greatness, I am just trying to sleep.” And these lines grab me every time: “So you’ve sent me a-packing/And it’s for good now, you say/If I were you, I’d have sent me long ago/Don’t get me wrong, love, I wanted to stay/But you dream of hopeful things/Like wedding rings/A settled down soul to share your days/I tried to settle down my soul/But the damn thing just wandered away.” How’s that for some excellent songwriting? The whole song is like that. Check out these lines: “The river bottom calls to me/It’d be so easy/But I can’t unlearn to swim.” This is one of the best songs I’ve heard this year so far. Nicky Sanders plays violin on this track, and Franklin Keel is on cello.

For the one cover on this release, Jane Kramer has chosen Tom Petty’s “Down South,” from his Highway Companion album. Of course, lines like “Gonna see my daddy's mistress/Gonna buy back her forgiveness” have a different feel when sung by a female voice. But I really like what she does with this song. The instrumental section has a sweet tone, and some really nice work on guitar. “I’ll give you all I have and a little more.”

Jane Kramer approaches “Why’d I Do That Blues” with a delightful playfulness that helps make this track another of this disc’s highlights. “Believe me, babe, I ain’t going to paint myself with any shade of virtue/If I had some to begin with, I lost it when I hurt you.” And then suddenly there is a wonderful section with trombone and trumpet, the two instruments as in conversation. That’s JP Furnas on trombone and Ben Hovey on trumpet. Jane concludes Carnival Of Hopes with “My Dusty Wings,” a fun bluegrass number which features Nicky Sanders on fiddle.

CD Track List
Carnival Of Hopes was released on February 26, 2016.
Posted by Michael Doherty at 9:28 PM