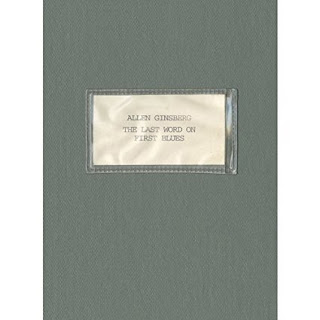 I’ve always had a lot of respect for Allen Ginsberg. I got the sense that he lived a life of little compromise, a life of honesty. Of course, this is the perspective of someone who never even met him. So who knows? I read Howl, of course, and some of his other work. But I think much of my admiration for him came from things outside of his work, like his appearance for the defense in the Trial of The Chicago Eight, and his roles in the free speech and anti-war movements. I knew very little of his musical output. I knew he sang, of course. He sings backup on Leonard Cohen’s “Don’t Go Home With Your Hard-On” (from the underrated Death Of A Ladies’ Man record). And there is something musical about his poetry. But with the release of the new three-disc edition of First Blues, titled The Last Word On First Blues, I was able to really immerse myself in the poet’s music. First Blues was originally a double album, released in 1983 (though a lot of it recorded much earlier), and this new issue includes more than an hour of bonus material, most of which was previously unreleased. Bob Dylan (who also sang backing vocals on “Don’t Go Home With Your Hard-On”) appears on a few of this album’s tracks, as do Happy Traum and David Amram.

The music itself is a strange brand of folk that owes a bit to Woody Guthrie, but is mostly Allen Ginsberg’s own creation, and at times feels as much a literary venture as a musical one (with a track like “Broken Bone Blues” making me think of Shel Silverstein). There is a lot of humor to these tracks, and he mixes social and political commentary and observations with direct descriptions of bodily functions. This is folk, country and blues which is loose, fun, playful, uncensored.

The first disc opens with “Going To San Diego,” one of the tracks to feature Bob Dylan, David Amram and Happy Traum. It’s a fun tune, with a bit of a New Orleans street jazz vibe. And I love the line “Old Mr. Nixon better bow down to Uncle Sam.” (This song was recorded in 1971, mind you.) That’s followed by “Vomit Express,” which opens with the line “I’m going down to Puerto Rico,” so feels right coming in on the heels of “Going To San Diego.” Some kind of theme, don’t you know. Check out these lines: “Start flying with those poor old sick ladies/Everybody in the plane crowded and drunk and they’re crazy” and “Existence is suffering, it ends when you’re dead” and “Watch every old love turn to ghost.” Yet it has something of a party atmosphere, like we’re all going down together, in whatever sense you wish to take it. “Smoke some grass and eat me some cock/Kiss the mouth of the sweetest boy I can see/Who shows me his white teeth and brown skin joy.”

“Put Down Yr Cigarette Rag” is a delightful song about the dangers of smoking and the tobacco industry, at one point mentioning how it’s better to suck tits or a cock than smoke a cigarette.  Can’t argue with that. It actually opens with a sort of admonishment: “Don’t smoke don’t smoke don’t smoke don’t smoke don’t smoke.” And you wonder if perhaps he’s making fun of someone who tells others not to smoke, or if that’s his true perspective. But it soon becomes clear, especially as he urges people to “smoke weed” but not cigarettes. I love this song.  (He returns to this message in “Stay Away From The White House”:  “Stay away from smoking cigarettes/Stay away, stay away.”)

As you’d guess, these tracks feature some excellent lyrics, such as this line from “Sickness Blues”: “Hungry ghosts chasing me because I’ve been chasing joys.” And I love this line from “Stay Away From The White House”: “Stay away from fucking rubber dolls even if they’ve got big tits.” And in “Hardon Blues,” he sings, “If you were sitting here in bed with me, you’d be the one I’d choose.” Ah, how’s that for a declaration of love? Then in “Guru Blues” he laments that he “can’t find anyone that isn’t out of his mind.”

The second disc opens up with a great folk tune, “Everybody Sings,” which has the vibe of a children’s song and begins with this line: “Everybody’s just a little bit homosexual whether they like it or not.” I want to hear a children’s choir sing this one. Seriously. You’ll know what I’m talking about when you hear it. The music takes an odd turn toward gospel for “Prayer Blues.” And then “Love Forgiven” has a kind of pretty feel. “Dope Fiend Blues” is a rock and roll song, celebrating getting high, and opening with the line “Yes, I’m a dope fiend/I don’t believe your laws.” And I like these lines: “Oh lord, dope fiend, I dropped LSD/I’ve seen Manhattan’s towers stick up in eternity/Ten years ago you shoulda took the elevator up with me.” And then “Old Pond” has a delightful, joyous bluegrass sound and some humorous lyrics, like “Got busted looking gay” and “Guess who I am, well, you don’t care.”

The third disc contains more than an hour of bonus material, all of which was previously unreleased. It opens with “Nurses Song,” a strange one. This is a poem by William Blake, set to music by Allen Ginsberg (though the liner notes claim “All songs written by Allen Ginsberg except ‘Feeding Them Raspberries To Grow’ by Peter Orlovsky”). At first it actually has something of traditional folk sound. But it just goes on and on, repeating the line “And all the hills echoed,” to the point where you wonder if it will actually never stop. It becomes a sort of mantra, a musical piece to just lose yourself and time in. But then more time passes, and it almost feels like an assault. Does he not like me? I’m beginning to think he hates me. He repeats that one line for more than seven minutes. Seriously. It’s like all of the hills in the world really do get a chance to echo the line. Why, why, why? Eventually it does end, but by then I’ve gone mad and bashed my head against the wall.

“Nurses Song” is followed by “Spring (Merrily Welcome),” which also has a repetitive thing about it at first – repeating “merrily, merrily, to welcome in the year” – and I get a bit nervous. But there are some other lyrics. It does return to the chorus, which is only that one line repeated several times. After a while it comes to sound like a gleeful, somewhat dim minstrel not wanting to relinquish the stage. But that’s not to say it’s bad. There is something oddly enjoyable about this track.

“September On Jessore Road” is one of Allen Ginsberg’s own poems set to music. It was included in The Fall Of America: Poems Of These States, 1965-1971. This track is really shows the musical sense of his poetry, and it features some nice guitar accompaniment. There is something rather haunting about this track. There are some differences in the lines from the published poem. One of my favorite tracks on this disc is “NY Blues,” describing the joys of poverty and troubles in New York, with lines like “Sink leaks through the walls,” “Junkies in the halls,” “Cockroaches crawl in bed with me” and “Loverboy threw meat at me and cursed the day we met.”

This disc also includes a rehearsal of “Come Along Vietnam” recorded in December of 1975. “Come along and save the whales/Save the humans too.” Toward the end he stops, and there is some studio banter. That is followed by a couple of live tracks from June of 1984, “Airplane Blues” and “Feeding Them Raspberries To Grow.” Peter Orlovsky sings lead and plays banjo on “Feeding Them Raspberries To Grow,” a funny track that also features kazoo and even a bit of yodeling. The third disc then concludes with “Do The Meditation Rock,” a seriously fun track from 1982 with Bob Dylan on bass. “Give your wife a kiss when your tire goes flat/You can’t think straight and you don’t know who to call/It’s never too late to do nothing at all.”

Disc One
Disc Two
Disc Three
The Last Word On First Blues is scheduled to be released on May 20, 2016 through Omnivore Recordings.
Posted by Michael Doherty at 2:46 PM