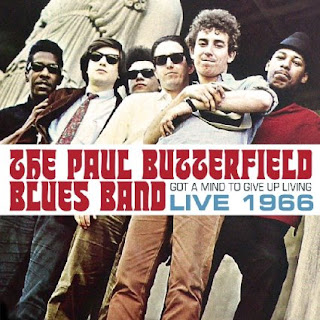 I think I first listened to Paul Butterfield Blues Band in my teens, and it might have been because of the reprints of all those psychedelic posters from the 1960s. I was very much into the Grateful Dead (still am), and became interested in (or at least curious about) all the other bands whose names were printed on those posters. And in all the artists who performed at Woodstock. Well, a few years before Woodstock, The Paul Butterfield Blues Band played a series of gigs at a small club in Boston. And now we can hear one of those gigs (though just which one is unknown – I guess people didn’t keep careful track of such things that much in those days). Got A Mind To Give Up Living: Live 1966 contains more than an hour of music from two sets. There are liner notes by Chris Morris, and several photos. Oddly, one of the photos is of a concert calendar from Club 47 (now known as Club Passim), though that is not the venue where this music was recorded. This was recorded at the Unicorn Coffee House in Boston. The sound, by the way, is not crystal clear, but is not a problem. It feels just about right for blues rock in a small club. The impressive lineup of the band at the time of this recording was Paul Butterfield on vocals and harmonica, Mike Bloomfield on guitar, Elvin Bishop on guitar and vocals, Jerome Arnold on bass, Billy Davenport on drums and Mark Naftalin on organ.

The CD opens with a brief band introduction and then an instrumental which is here titled “Instrumental Intro.” In the liner notes, Mark Nafalin is quoted as saying that the band referred to it as “The Medley,” though that wasn’t its official title either. The tune touches upon some blues themes. The band then goes into “Look Over Yonders Wall,” an old blues song written by James Clark. This song is often titled “Look On Yonder Wall,” and was famously recorded by Elmore James. It is also known as “Look Over Yonder’s Wall” and “Hand Me Down My Walking Cane.” Things then get moving with “Born In Chicago,” the song that led off the band’s debut record. It was written by Nick Gravenites.

Paul Butterfield Blues Band does a cool rendition of “Get Out Of My Life, Woman,” a song Jerry Garcia used to do in concert. (And last year, when songwriter Allen Toussaint died, I saw Dead & Company perform this song.) This version by Paul Butterfield features nice work on both guitar and organ. I particularly like Mark Naftalin’s work during that instrumental section halfway through. Things get more mellow and darker with “Never Say No.” This is some deep blues here, coming as kind of a surprise, as I’m more accustomed to that loud, unbridled energy of this band. But this track is excellent. It really drew me in, and features some wonderful stuff on harmonica.

The giant track on this disc is a cover of Nat Adderley’s “Work Song,” with the harmonica as the lead instrument at the beginning. This is an instrumental track, Paul Butterfield Blues Band not using the lyrics that Oscar Brown, Jr. added to the tune, and it’s a fantastic combination of blues rock and jazz. Seriously, this becomes a phenomenal jam, the disc’s best track, with all of the musicians getting chances to shine. Apparently, this tune ended the first set of the show. The band began the second set with another instrumental, “Comin’ Home Baby,” written by Ben Tucker and originally recorded by the Dave Bailey Quintet. Like “Work Song,” lyrics were added to this tune, but Paul Butterfield Blues Band doesn’t use them, doesn’t need them. This is another of the disc’s highlights.

CD Track List
Got A Mind To Give Up Living: Live 1966 is scheduled to be released on June 3, 2016 through Real Gone Music.
Posted by Michael Doherty at 9:00 PM