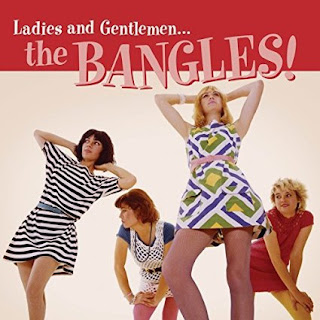 The early to mid-1980s were probably the most fun years in pop music. Probably? No, definitely. And The Bangles were a big part of that. Seriously, how can you beat “Walk Like An Egyptian”? Different Light was one of the bright spots of 1986, easily one of the best records of that year. I didn’t get a chance to see them perform live until the late 1990s when they got back together. And they were fantastic. Originally called The Bangs, they had to change their name when it became known there was another band by that name. Ladies And Gentlemen… The Bangles, a compilation originally released digitally in November of 2014 and soon to be released on CD, captures the band in its glorious and insanely fun early years. Seriously, this is some of the best music I’ve heard from this group. Most of these tracks feature the band’s original bass player, Annette Zilinskas.

Yes, it opens with a bang. The opening track, “Bitchen Summer/Speedway,” begins with someone whispering, “Ladies and gentlemen…The Bangs” (thus the title of this compilation). And then there is an explosion. The tune itself is an instrumental that has kind of a 1960s surf vibe, but with a bit of an edge. It was written by Susanna Hoffs and David Roback, and was originally released on Rodney On The ROQ Vol. III in 1982. It’s followed by “Getting Out Of Hand,” written by Vicki Peterson. This, too, has a 1960s pop feel. And it is so much fun. I had worked fourteen hours the day I first listened to this disc, and having it on totally energized me and made me want to have a little party. It’s great pop, with a Beatles feel to the bass. This was the first single to be released by the band. It came out in 1981. The flip side, “Call On Me,” is also included here.

In 1982, The Bangles released a self-titled EP, and all five tracks from that record are included on this compilation. “I’m In Line” is another with a strongly Beatles-influenced bass line. It’s fun, but probably my favorite song from that EP is “Want You,” written by Vicki Peterson. It is just fucking great, a rock and roll tune with energy to spare and a catchy guitar part. Push the furniture out of the way, and put on your favorite dancing feet because this one is bound to get you moving. And then “Mary Street” will keep you going. The band, on these tracks, has a deliberate 1960s sound, and they conclude the EP with a cover of a mid-1960s gem titled “How Is The Air Up There?” This song was written by Steve Duboff and Artie Kornfeld, and recorded by their group, The Changin’ Times.

There are four demos on this compilation, including a cover of The Turtles’ “Outside Chance,” written by Warren Zevon, and a cover of “Steppin’ Out,” the Paul Revere & The Raiders song that led off the Just Like Us! record. The other demos are “The Real World” and “Call On Me.” There are also two live tracks, both recorded in 1984. These are the only tracks on this disc to feature Michael Steele on bass. The first is “Tell Me,” a song that was included on the band’s first full-length record, All Over The Place, released in 1984. The second is a cover of Love’s “7 & 7 Is.” The band introduces it, “You’ll remember this one.” Their version has all the attitude of the original.

The compilation then ends with its two oddest tracks, the first being a commercial. “Here’s The Bangs for No Magazine.” And they sing a little jingle about a new issue being out on the stands. It ends: “Pop, trash, noise, music, Nancy Reagan. Yeah.” And the second is “The Rock & Roll Alternative Program Theme Song,” for a radio program at KZEW in Dallas (the station was also called “The Zoo,” and thus the line, “It’s all happening at the zoo,” which is also a reference to the Simon & Garfunkel song). It’s pretty repetitive, though some of the spoken word stuff in the background reminds me of “Square Pegs” (but that might just be me).

CD Track List
Ladies And Gentlemen… The Bangles! is scheduled to be released on June 24, 2016 through Omnivore Recordings.
Posted by Michael Doherty at 6:22 PM