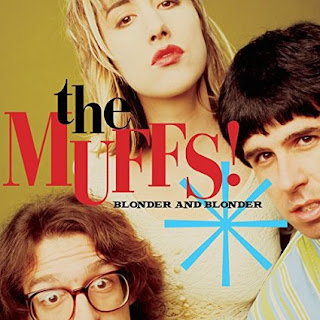 Last year saw the re-release of The Muff’s self-titled debut album, with lots of bonus tracks. It was a whole lot of fun revisiting some of the great music from my college years. And now the band’s second album, Blonder And Blonder, is getting a special re-issue as well, with plenty of bonus material, including five tracks that were previously unreleased (actually six, including the unlisted track). This is the album that really got me into this band. I worked at a college radio station at the time of its release in 1995 (the same year The Muffs had a song on the Clueless soundtrack), and this disc was in heavy rotation, and for good reason. It’s seriously fucking fun, some great rock and roll delivered with punk energy, and excellent songs written by Kim Shattuck. Chris Crass Utting and Melanie Vammen had left the band after the release of the first album, and Roy McDonald had joined on drums, and so this CD was the first to have what would be the group’s steady lineup – Kim Shattuck on vocals and guitar, Ronnie Barnett on bass and Roy McDonald on drums. And this re-issue includes liner notes by all three members.

Blonder And Blonder opens with a bang, a great, tough little rock number titled “Agony.” “And when you think you're more clever than anyone/Now think again, we knew it all along/But in reality I know you'll never be okay/So now you're all alone/And you don't really like the way he went away/And now you're living in agony.”  I totally dig the ending of this song, like they are just not ready to let go yet. (By the way, both Roy and Kim talk about that ending in the liner notes – clearly, I’m not the only one to bloody love it.) The rhymes of “Oh Nina” always make me smile for some reason – “Pasadena,” “ballerina.” And I just can’t get enough of Kim’s screams and shouts. “You! You!”

“Sad Tomorrow” is one of my favorites. Sure it’s an obvious choice of favorites, but that’s okay. The songwriting is spot-on, and there is something strangely and undeniably happy about the sound. Check out these lyrics: “I don't know why you're so glad/When my head's filled with sorrow/So maybe if I fade away/There'll be no sad tomorrow.” Is it perverse to dance around to someone singing, “Maybe one day I’ll die – who cares?”

“Red Eyed Troll” is another favorite. It’s just a bloody fun, incredibly catchy song. It’s so much fun to dance around to, and I love hearing Kim shout, “And I don’t need your attitude/I don’t need no attitude/Oh yeah.” This re-issue contains another version of “Red Eyed Troll,” a demo version that was previously unreleased. On this demo, Kim plays all the instruments. “Won’t Come Out To Play” is another seriously fun number, and is also one for which the demo is included in the bonus tracks. At the end of the demo, she goes into “Become Undone,” just on vocals and guitar.

I know I’ve mentioned this before, but sometimes Kim’s vocals remind me of Joan Jett’s early material, like on “Funny Face.” That’s followed by “Ethyl My Love,” a straight-ahead unabashed rocker. Oh yes! (By the way, a demo version of “Ethyl My Love” was included on the re-issue of the band’s first CD.) The original album ends with “Just A Game,” a sweeter-sounding song than the others. As Kim explains in the liner notes, this track is actually a demo. For me, it’s another of the album’s highlights.

This disc contains eight bonus tracks. In addition to the ones already mentioned, the two tracks backing “Sad Tomorrow” on the 1995 European CD single – “Goodnight Now” and “Become Undone” – are included. The rest are previously unreleased demos, with Kim playing all the instruments. These include “Born Today,” “Look At Me” and “Pennywhore.” I can’t help it – “Pennywhore” just totally delights me. A different version of this song would end up on the band’s next album, Happy Birthday To Me. The version here is even shorter (just over a minute long), and features Kim playing slide guitar. And yes, at the end of this disc there is an unlisted extra track (as there was on the re-issue of the band’s first album).

CD Track List
This special, expanded edition of Blonder And Blonder is scheduled to be released on May 27, 2016 through Omnivore Recordings. In addition to CD, a vinyl release is planned, and I hear the vinyl will be a baby blue.
Posted by Michael Doherty at 7:50 PM