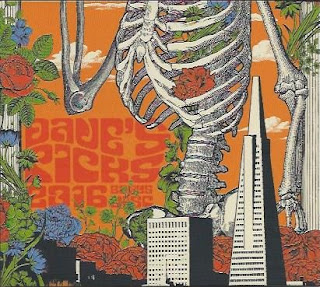 One of the best gifts I’ve received in recent years is a subscription to the Dave’s Picks series of Grateful Dead live recordings. A yearly subscription comes with a bonus disc. And the 2016 bonus disc arrived with Dave’s Picks Volume 18 earlier this month. Volume 18 contains the complete show the Grateful Dead performed on July 17, 1976, and the third disc contains some filler from the previous show, music from the first set and the encore. The 2016 Bonus Disc contains more music from July 16, 1976, this time from the second set. And because of how closely this bonus disc is related to Dave’s Picks Volume 18, the cover artwork actually forms a complete picture with the cover of Volume 18 (reminding me of the way Skull Fuck – also  known as Skull And Roses – unfolded).

The disc opens with “Playing In The Band,” always a cause for celebration. Sure, there is a messy moment or two near the beginning, but within three minutes the band is off on a cool, mellow, trippy jam. This is an excellent jam that sort of becomes “Stronger Than Dirt” at one point before eventually moving into a cool “Cosmic Charlie,” a song I’ve always loved. (When I was a teenager I had a blue betta fish named Cosmic Charlie, and whenever I would play Grateful Dead music, he would dance, often jumping out of the water – no other music caused any reaction from him.) This is one of those smooth, slightly slower mid-1970s renditions of “Cosmic Charlie,” with Donna’s vocals blending really nicely with Jerry’s. Check out that sweet vocal ending.

This disc skips “Samson And Delilah,” and goes right to a wonderful “Spanish Jam.” I love the way this jam builds, and it leads to a drum solo, which then in turn leads into “The Wheel.” This is a song that had a different feel in the mid-1970s, with a somewhat slower feel than later versions. I like this rendition a whole lot. “The wheel is turning and you can’t slow it down/You can’t let go and you can’t hold on/You can’t go back and you can’t stand still/If the thunder don’t get you then the lightning will.” The jam is kind of pretty at times, and it leads back into “Playing In The Band.”

“Around And Around” is missing. I wish it were included, especially as “Playing In The Band” leads directly into it (so its absence requires a bit of a fade at the end of “Playing”). It could certainly fit, as this disc contains just under seventy minutes of music (either that, or “Samson And Delilah” could be included, but not both). But whatever the reason, it’s not here, and the disc goes right to a moving rendition of “High Time.” Here too Donna’s vocals have a strong presence. This disc then concludes with “Sugar Magnolia,” which concluded the second set that night. There is a bit of stage banter before the tune begins, including birthday wishes to Bill Graham. This is a really good version of “Sugar Magnolia.”