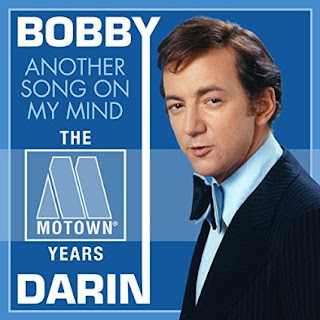 Bobby Darin went through a lot of musical changes in his short life (he was only thirty-seven when he died). His career really took off in 1958 with the release of “Splish Splash,” a fun and kind of goofy rock and roll song that he co-wrote with Murray Kaufman. He followed that with several other hit singles, much of which he wrote or co-wrote, including “Early In The Morning” and “Dream Lover.”  He also covered other people’s material, including standards. And in the early and mid-1960s he recorded both country and folk albums, while also continuing to put out pop albums. He recorded on many different labels, including Atco, Capitol and Atlantic. And at the end of his career, in the early 1970s, he recorded for Motown. Another Song On My Mind: The Motown Years is a new two-disc set collecting the material he recorded for that label, including two complete albums, singles and alternate versions.  Most of these tracks are covers, but there are some original tunes as well. This set includes liner notes by Joe Marchese, along with a few photos.

The first disc contains the complete self-titled 1972 record, as well as single versions of several songs. It opens with a good version of Randy Newman’s “Sail Away,” the title track to one of Randy Newman’s best albums. Bobby Darin sounds a bit like Randy Newman, especially as he delivers the song’s first line, “In America, you get food to eat.” I really like the backing vocalists on this version, giving the song something of a gospel vibe. These backing vocals feel so natural to the song that it now seems odd they weren’t in the original. The first disc also includes the original single version of “Sail Away,” which is slightly shorter. Bobby follows “Sail Away” with “I’ve Already Stayed Too Long,” a sweet country tune written by Ben Peters.

“Something In Her Love” is the only song on Bobby Darin to be co-written by Bobby Darin (with Tommy Amato). It’s a touching love song in which Bobby sings, “As long as she’s around there’ll be a morning sun/Even when the sky is grey above/All she has to do is say good morning, hon/’Cause there’s something in her love I love.” The song has a full sound, with strings, but it is the little touches on piano in the first section of the song that I really like. This disc also includes the single version of this song.

One of my favorite tracks on this first disc is “Who Turned The World Around,” in large part because of Bobby Darin’s vocal performance. He delivers this one with such passion. But it’s also just a really good song, written by Scott English and Richard Kerr. It’s followed by “Shipmates In Cheyenne,” another good tune. This is one I’m curious about. The liner notes indicate it was written by Joe Henry and Kerry Chater. But on the 1975 John Denver record, Windsong, where the song is listed as “Shipmates And Cheyenne,” it is credited to Joe Henry and John Denver. Obviously, the Bobby Darin version came out first, but that doesn’t necessarily mean the title and credits are correct. If anyone has the answer to this, please let me know.

I’m a big Cat Stevens fan, and on Bobby Darin, Bobby covers “Hard Headed Woman.” Here he employs some backing vocalists, which add to the power of this rendition. Bobby changes the line “People who can glide you on a floor” to “People who can slide you on a floor,” and the line “And how you do” to “And they always do.” Also included is the single version (this song was the flip side to “Sail Away”), which has a slightly shorter fade-out at the end.

Another highlight of the first disc is “I Used To Think It Was Easy,” a song written by Pat St. Clare. This is such a playful song, and I love the keys at the beginning. This song has a great opening line: “When the sun is hot and my old lady is not.” Bobby Darin is clearly having a good time with this song. Nancy Sinatra also recorded this one, including it on Woman (singing, “When the sun’s too hot and my old man’s not”). I also really like the live version of “Simple Song Of Freedom” that is included on the first disc. This song was written by Bobby Darin, and was released as a single. It was from the album Live From The Desert Inn, which was intended to be Darin’s first Motown LP, but ended up not being released until 1987. It’s an excellent tune. The flip side is a wonderful cover of Bob Dylan’s “I’ll Be Your Baby Tonight,” also recorded live.

The second disc contains the complete album of Darin 1936-1973, which, as you can guess from the title, was released after Bobby Darin’s death. It wasn’t an album planned by Darin, but rather assembled after his passing. And yet it includes some excellent tracks. It opens with a cover of the Paul Williams/Roger Nichols song “I Won’t Last A Day Without You,” which was a hit for the Carpenters. I don’t know what it is about this song, but it always seems to affect me, no matter how cheesy it might be. This disc also includes an alternate CD version of this song, which was included on the 1991 CD release of this album.

This album includes a different mix of Randy Newman’s “Sail Away.” That’s followed by an original song, “Another Song On My Mind,” written by Bobby Darin and Tommy Amato, the song that gives this compilation its title. It’s an odd, mellow tune. “But I cannot sing your melody with another song on my mind.” That’s a kind way of saying that, eh? “Happy (Love Theme From Lady Sings The Blues)” is a song that Bobby Darin released as a single, and that single version is included here, as well as the full-length album version, and also the alternate CD version, which is actually even longer (approximately six minutes). It was written by Michel Legrand, with lyrics by Smokey Robinson, and was also recorded by Michael Jackson.

Bobby Darin goes back to the 1950s with a cover of “Blue Monday,” which he begins a cappella. This is a fun rendition, and the bass line is given prominence. The alternate CD version is also included, which has a different beginning. Darin also covers Bob Dylan’s “Don’t Think Twice, It’s All Right,” and delivers it with a kind of rough, tired quality to his voice. This disc also includes the alternate CD version.

Disc One
Disc Two
Another Song On My Mind: The Motown Years was released on May 6, 2016 through Real Gone Music.
Posted by Michael Doherty at 9:56 PM