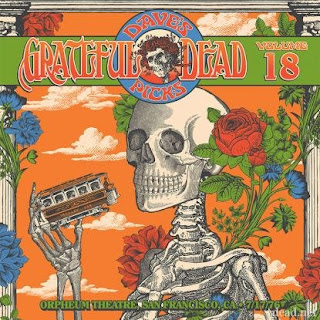 It’s always a treat when a new volume of Dave’s Picks arrives in the mail. I knew one was coming, of course, because someone in the Dead organization sends out an email when they’re about to ship them. But still, there is something so enjoyable about tearing open the envelope and seeing some Grateful Dead artwork and knowing soon I’ll be hearing some great music. Volume 18 contains the complete show the Grateful Dead did on July 17, 1976 at the Orpheum Theatre in San Francisco, as well as some music from the previous night at the same venue. These shows were part of the band’s first run in their hometown after their break.

The first disc contains the entire first set, plus the first song of the second set. The band gets this show going with the fun Chuck Berry tune “Promised Land.” Some good ol’ rock ‘n’ roll to start the evening, and it’s not long at all before I’m feeling damn good. They follow that with the wonderful “Mississippi Half-Step Uptown Toodeloo,” with Jerry delivering some cool stuff on guitar, and Keith a strong presence on piano. They let a sweet and relaxed jam extend a bit before going into that last section of the song. Jerry’s vocals are very soft in the mix at the beginning of “Deal,” but that problem is soon fixed. And though this is a very short “Deal” (less than five minutes), it has some good energy. The “New Minglewood Blues” that follows it also has great energy. Bob’s song selections in this first set are all fun tunes, nothing slow, nothing introspective or deep. In fact, he ends the first set the way he began it, with a Chuck Berry song. This time it’s “Johnny B. Goode.”

In the first set, Jerry delivers a sweet “Peggy-O,” that is just as beautiful in the jams as in the vocal sections. “Sugaree” doesn’t feel all that special at first, but approximately four minutes in it gets interesting, the way Jerry comes in almost over what Keith is doing, building on it. And then the jam toward the end gets good, rising to some delicious heights, particularly Jerry’s guitar. You can hear the crowd appreciating it too at the end. The first disc concludes with the first song of the second set, “Samson And Delilah,” a song that was relatively new at the time (well, new to the Grateful Dead anyway), having been introduced only a month or so earlier.

The second disc contains the rest of the second set and the first song of the encore. As usual, the second set is where most of the magic happens. The band eases into a moving rendition of “Comes A Time.” The jam at the end is truly beautiful, one of the reasons to own this set, and it takes on a sort of “Eyes Of The World” feel. The band then takes things in a different direction with “The Other One,” teasing it a bit before going into a brief drum solo, which then leads into the song, with that great monster bass line by Phil announcing the tune. And the band is immediately off into an excellent jam. I am always excited to hear what the band will do with this song, and this time after the first verse, they go into a spacy jam (which this set actually labels as a separate track – “Space”). The jam eventually moves into “Eyes Of The World,” one of my favorites. This song always makes me so fucking happy, and this is a really good version, especially the jam between the second and third verses. For some reason the jam after the third verse is labeled as a separate track – “Jam.” I really have no idea why they did that, but it doesn’t matter. It’s a cool jam, playing on a certain groove for a while. Interestingly, toward the end it has a little “Goin’ Down The Road Feeling Bad” tease. It seems there is quite a bit of foreshadowing in the second set of this show. The band then returns to “The Other One” for the second verse, before quickly moving into “Goin’ Down The Road Feeling Bad.” The band then concludes the second set with “One More Saturday Night.” It was, after all, a Saturday night.

Did I ever mention the Grateful Dead T-shirt I was going to make? On the front was to be a close-up of Jerry’s face, smiling, with his finger over his lips, saying, “Sshhh.” And on the back it was going to say, “Don’t tell Bob it’s Saturday.” Anyway, I’d planned to make those for the fall 1995 tour. Oh well.

This is a good version of “One More Saturday Night,” with set-closing energy. The second disc then concludes with the first song of the encore, “U.S. Blues.” There’s a bit of funny stage banter with Bob before they start the song. This is a fun song, and timely too – this show was less than two weeks after the U.S. bicentennial. All in all, this second disc is fantastic.

The third disc begins with the rare second encore, “Not Fade Away,” which features an extended jam. The rest of the disc is from the Dead’s show on July 16, 1976. Back in the days of trading tapes, we’d label any extra tunes “filler.” I don’t know if anyone does that anymore, and it does sound a bit, well, dismissive. Anyway, the music here is really good. It begins approximately halfway through the first set, with “Big River,” and includes the rest of the first set, as well as the encore. This disc features another sweet rendition of “Peggy-O,” but the highlight is “The Music Never Stopped” into “Scarlet Begonias,” which ends the first set. The encore is “U.S. Blues” (yes, two nights in a row).