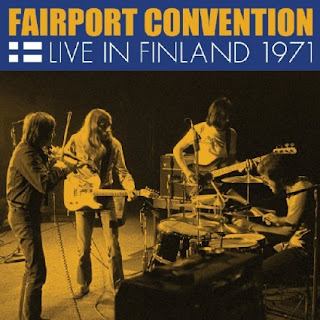 Fairport Convention, for those who don’t know (and from talking with several people lately, it seems many don’t know, which makes me a bit sad), is the British folk rock band where Richard Thompson got his start in the 1960s. He left the band in 1971 (this is a band that went through a whole lot of changes in that period), and the fiddle became more of a lead instrument. The new CD from the band, Live In Finland 1971, features a previously unreleased live set recorded on August 22, 1971 at the Ruisrock Festival in Turku, after Thompson had left. The lineup is Simon Nicol on guitar and vocals, Dave Mattacks on drums, Dave Pegg on bass and Dave Swarbrick on fiddle and vocals. Yeah, Simon Nicol was the only original member left at this point, but this lineup is fantastic. These guys really rock on these tracks, the material being mostly traditional folk tunes played with a wild rock energy. The CD includes liner notes by Richie Unterberger, with notes from interviews with Simon Nicol and Dave Pegg.

This live album opens with “Bridge Over The River Ash,” a song that was included on the 1971 release Angel Delight. The fiddle leads off the tune. I also really like the bass part to this song. The track ends strangely with some vocals (but no real lyrics). The band then goes into “The Journeyman’s Grace” (which they introduce as “Journeyman”), the CD’s only original composition, written by Dave Swarbrick and Richard Thompson. This song was also from Angel Delight, and it’s a seriously cool tune. “Oh please, journeyman, help me on my way/Oh please, help me please, I won't be afraid.” It becomes a great jam. This track is a highlight, sure, but the CD is really just getting started.

“Mason’s Apron” is an instrumental tune played at a frantic pace, with the urgency of someone with very little time left. You’ll want to dance to it, but your feet may not be able to keep up. Mine couldn’t, not even after I fed them amphetamine and set them on fire. Let me know how you do with it. There is even a brief drum solo near the end. Ooo-weee! That’s followed by “Sir Patrick Spens,” a song that the band included on the 1970 record Full House. They then do a wild rendition of “Matty Groves,” a song that’s been covered by a lot of artists over the years. It was included on the band’s 1969 record Liege & Lief.  Fairport Convention just goes nuts in the instrumental section; it must really have been something to have attended this concert. They keep up the energy with “Sir B. McKenzie’s Daughter’s Lament,” a great medley that is mostly instrumental, but then has a strange acappella section. Things then wrap up with “Sir William Gower,” a song from Angel Delight.