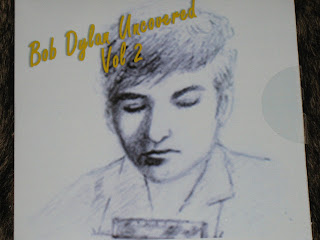 Bob Dylan is one of the best and most prolific songwriters of our time. Ten years ago, a collection of his songs covered by other artists, Bob Dylan Uncovered, was released. It featured artists like Cadillac Moon, Russ Seeger and The Walkers. And now, to celebrate Bob Dylan’s seventy-fifth birthday, we are getting a second volume, Bob Dylan Uncovered Vol. 2, featuring sixteen Dylan songs done by a variety of artists. Two of them, Russ Seeger and Caroline Doctorow, had tracks on the first volume, but the rest are artists new to the series. Included here are some of Dylan’s most well-known songs such as “The Times They Are A-Changin’” and “I’ll Be Your Baby Tonight,” but also some of his lesser-known gems, like “I’ll Keep It With Mine.” A portion of the money raised from sales of this wonderful compilation goes to Rock Can Roll, a non-profit hunger-relief organization.

The CD opens with Bill Shuren & The Cavalry doing “I’m Alright,” a song that was included on the eleventh volume of the Bob Dylan Bootleg Series, The Basement Tapes Raw. “I’m a three-time loser now, but I’m alright.” It’s a good version with a full-band sound and vocal performance that works perfectly with the lyrics. That’s followed by a fun rendition of “Hazel” by Allen Santoriello & The Gunslingers, with great stuff on keys. This is a song from Bob Dylan’s Planet Waves record. The version here has more of a positive groove and tone.

I love the Desire album, and it’s great to get this powerful, gorgeous rendition of “Oh Sister,” performed by Russ Seeger, joined by vocalist Michele Sivori. I always liked the violin on this song, and in this rendition there is a delightful, surprising moment with fiddle approximately three minutes in. It is followed by another of this disc’s highlights, a pretty and delicate rendition of “Time Passes Slowly,” a song from New Morning. This version by Caroline Doctorow is just absolutely wonderful; it’s the kind of song you want to reach out to, to meet it halfway. I love Caroline’s voice. Annie Mark and Chris James deliver a soulful rendition of “I Threw It All Away,” an excellent tune from Bob Dylan’s Nashville Skyline record. Michele Sivori provides some backing vocals on this track, and then both Annie Mark and Michele Sivori provide some excellent backing vocals on Jenna Silverman’s cool version of “New Pony.” I also really like Chris Laybourne’s work on tenor sax on that track.

A lot of these artists take the songs in different directions, giving them their own personal spins. Bob Westcott gives us an interesting rendition of “Love Minus Zero/No Limit” (here listed as “Love Minus Zero, No Limit”). It’s done almost like spoken word to just acoustic guitar accompaniment. There is something almost lullaby-like about this version, with a comforting late-night feel. Claudia Jacobs turns in an interesting rendition of “Buckets Of Rain,” giving it a New Orleans vibe, complete with delicious work on trombone by James Hubbard, very different from Dylan’s original. “Buckets Of Rain” was originally included on Bob Dylan’s fantastic Blood On The Tracks record. And the CD concludes with a surprisingly upbeat rendition of “I’ll Be Your Baby Tonight” by Miles To Dayton, kicking off with a drumbeat that also has a New Orleans feel (you could imagine them going right into "Iko Iko" instead of this Bob Dylan number). This rendition features some nice blending of voices.