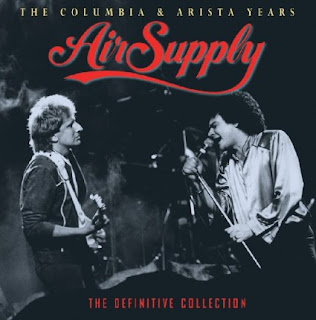 The first disc opens with “Empty Pages,” from the album Love And Other Bruises. And actually this was a newer version of a song from their first album, 1976’s self-titled Australian release. “Love And Other Bruises” was likewise originally included on the band’s self-titled debut. The version included here is the one from Love And Other Bruises. These are songs I wasn’t all that familiar with (my parents must not have owned these first few records), but am enjoying now. But by the third track, “Lost In Love,” we’re into the band’s big hits, and the ones I remember so well from my childhood. This song was included on the band’s Life Support album, and then re-recorded to be the title track of their next album, and it’s this second version that is included here. It’s still so pretty. “You know you can’t fool me/I’ve been loving you too long.” This song makes me want to slow dance with a girl in a school gym. Who’s up for it?

I feel so silly, but these songs are having a stronger effect on me than I’d expected. “All Out Of Love” still works so well. “And what would you say if I called on you now/And said that I can’t hold on/There’s no easy way, it gets harder each day/Please love me or I’ll be gone, I’ll be gone/I’m all out of love/I’m so lost without you.” Beautiful. And it’s followed by another big one, “Every Woman In The World.” “Girl, you’re every woman in the world to me/You’re my fantasy, you’re my reality.” “Just Another Woman” was also included on both Life Support and Lost In Love, and is more of a dance song. Check out that groovy bass line.

“The One That You Love” was the title track to the band’s next record, with that famous hot air balloon cover. This record was everywhere in 1981, and this song was played a lot, reaching #1 on the Billboard Hot 100. It is beautiful, and I love the way it builds, starting off somewhat quietly with just vocals and keys and then becoming something powerful. Their voices are just incredible. “Love is everywhere, I know it is/Such moments as this are too few/Oh, it’s all up to you, it’s all up to you.” This was always one of my favorites. Also included from that record are “Here I Am (Just When I Thought I Was Over You),” which was another hit for the group, “Don’t Turn Me Away,” “I Want To Give It All” and “Keeping The Love Alive.” The version of “Sweet Dreams” included here is the single version, which is a bit shorter than the album version. “Close your eyes, I want to ride the skies/In my sweet dreams/Close your eyes, I want to see you tonight/In my sweet dreams.”

The first disc then concludes with a couple of tracks from the group’s Now And Forever album – “Come What May” and the title track. “Come What May” was written by Tom Snow and Cynthia Weil, and is about a special love. “When she looks at me/I know the girl sees things nobody else can see/All of the secret fears inside/And all the craziness I hide.”

The second disc begins with more tracks from Now And Forever (seven of the album’s ten tracks are included in this compilation), beginning with another of the group’s big hits, “Even The Nights Are Better.” This one was written by J.L. Wallace, Kenneth Bell and Terry Skinner. “I never dreamed there’d be someone to hold me/Until you told me/And now that I’ve found you/Even the nights are better.” “Young Love” and “Two Less Lonely People In The World” were also hits, though didn’t reach as high a position on the chart as did “Even The Nights Are Better,” both reaching #38 on Billboard Hot 100.

One of Air Supply’s best songs is “Making Love Out Of Nothing At All,” from the band’s 1983 Greatest Hits compilation (it was not released on an LP prior to its inclusion as a hit, though was released as a single). This song was written by Jim Steinman, who is known for writing all of the songs on Meat Loaf’s Bat Out Of Hell (including “Paradise By The Dashboard Light,” one of my favorite songs).  He also wrote Bonnie Tyler’s “Total Eclipse Of The Heart,” another fantastic song. When “Making Love Out Of Nothing At All” peaked at #2 on the chart, “Total Eclipse Of The Heart” was in the #1 spot. “Making Love Out Of Nothing At All” features such a great vocal performance; the song demands it, in fact. It sounds like a Meat Loaf song. By the way, Max Weinberg plays drums on this track, and Roy Bittan is on keys (both are members of The E Street Band). And those great backing vocalists? They also sing on “Total Eclipse Of The Heart.” “And I don’t know how you do it, making love out of nothing at all.”

That’s followed by “I Can Wait Forever,” a song from the 1984 soundtrack to Ghostbusters. It was written by Graham Russell, David Foster and Jay Graydon. There are a couple of tracks from the 1985 self-titled album, including “Just As I Am” and “I Can’t Let Go.” The version of “The Power Of Love (You Are My Lady)” is the single version, which is more than a minute shorter than the album version. The album version, by the way, is simply titled “The Power Of Love.” Four tracks from the 1986 record Hearts In Motion are included here. “Lonely Is The Night” was written by Albert Hammond and Diane Warren; it reached #76 on the Billboard chart. “Lonely is the night when I'm not with you/Lonely is the night/Ain't no light shining through/’Til you're in my arms/’Til you're here by my side/Lonely am I.” This collection concludes with “Love Is All,” a song from The Christmas Album, the group’s final Arista record.

Disc One
Disc Two
The Columbia & Arista Years: The Definitive Collection was released on June 3, 2016 through Real Gone Music.
Posted by Michael Doherty at 12:59 PM