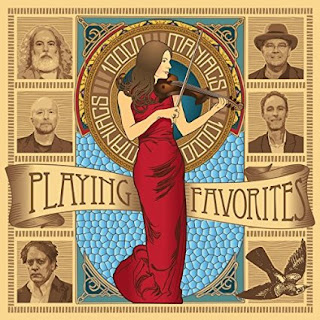 Natalie Merchant left 10,000 Maniacs more than two decades ago, so it’s interesting to me that a new album from the band titled Playing Favorites would still concentrate on material that she wrote or co-wrote. Ten of the fourteen tracks were written or co-written by Merchant. Of course, there is no denying that they are great songs, that they are among fans’ favorites. It’s also interesting that they’ve returned to a live album of old favorites following 2015’s album of folk covers, Twice Told Tales. The core of the band remains the same: Jerome Augustyniak on drums, Dennis Drew on keys, Steve Gustafson on bass, and John Lombardo on guitar and vocals, along with now long-time members Jeff Erickson on lead guitar and Mary Ramsey on vocals and violin and viola. Joining them on this release are Melanie Luciano on backing vocals and acoustic guitar, Bryan Eckenrode on cello, Oliver Chezliak on trombone, Eric Crittenden on alto saxophone and Robert Browning on tenor saxophone. These tracks were recorded at the show the band did in Jamestown, New York on September 13, 2014. It’s not the full show, but more than an hour of music. There is no stage banter. The liner notes contain several photos.

The CD kicks off with “What’s The Matter Here?” which was a big hit for the band. It was included on In My Tribe, which was the first 10,000 Maniacs record for many of us. I bought it on cassette when it came out (so, yeah, my copy has “Peace Train”). This song really struck me at the time, because while it has a kind of bright pop feel, its lyrics are on a serious subject, which surprised me then. “If you don't sit in your chair straight/I'll take this belt from around my waist/And don't you think that I won't use it.” I love the way they present that section in this rendition. And Mary Ramsey really delivers a powerful and emotional reading of the following lines: “Well, answer me and take your time/What could be the awful crime/He could do at so young an age?/If I'm the only witness to your madness/Offer me some words to balance/Out what I see and what I hear.” This song was written by Robert Buck and Natalie Merchant. It’s followed by “Like The Weather,” another hit from In My Tribe, though I should mention that this isn’t delivered like a continuous live performance. The tracks fade out. The songs on this CD are not presented in the order that they were performed at the concert. That being said, this is a really good version, with some humorous touches on guitar. Also from In My Tribe, they play a really fun rendition of “My Sister Rose” (one of my favorite tracks) and “Hey Jack Kerouac,” both with the horn section. (“Hey Jack Kerouac” closed out the show that night.)

“Love Among The Ruins” was the title track of the first album the band released with Mary Ramsey as the new lead vocalist. It has a happy and innocent vibe. The song is credited to the band and Jules Shear. Other songs from Love Among The Ruins that the band plays here are “Rainy Day” and the cover of Roxy Music’s “More Than This” (a tune written by Bryan Ferry). “More Than This” was also released as a single, and 10,000 Maniacs had a hit with it. I love the strings on this live version. It’s followed by one of the CD’s highlights, “Can’t Ignore The Train,” and part of what makes this version so wonderful is the work on strings right at the beginning. Also, it has a great energy. “Can’t Ignore The Train” was written by Natalie Merchant and John Lombardo. And that’s followed by another of the CD’s highlights, a cool, long version of “Stockton Gala Days,” which includes a wonderful instrumental intro. This track is excellent from beginning to end, probably my favorite on this CD; it features some fantastic playing by the entire band. There is also an excellent cover of “Because The Night,” a song the band included on another live album, MTV Unplugged.

CD Track List
Playing Favorites was released on June 3, 2016 through Omnivore Recordings.
Posted by Michael Doherty at 12:43 AM