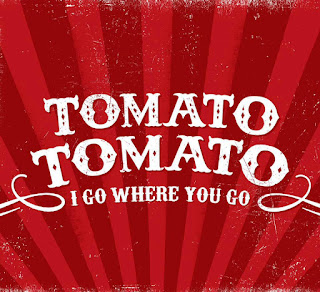 Tomato/Tomato is the bluegrass project of the husband and wife duo of John and Lisa McLaggan. I was turned onto them a couple of years ago when they released their debut full-length CD, So It Goes, an album that made me happy from the moment it started. Their new release, I Go Where You Go, features mostly original tunes written by John McLaggan. As on the first CD, they are joined by Ray Legere on fiddle and mandolin (and guitar on one track). Also joining them this time around are Dillon Robichaud on banjo, Andrew Sneddon on dobro, Remi Arsenault on bass and backing vocals, Mark Hill on guitar and Kaitlyn Raitz on cello.

They start this one off with a wonderful, fun tune titled “Ain’t Dead Yet,” in which they sing “I may be living on borrowed time/But that don’t matter a bit/There may be a bounty on my head/Oh no, I ain’t dead yet.” Ah, sometimes that’s the most, the best we can say about our current situation: “I ain’t dead yet.” But if you’re going to say it, you might as well sing it. Kaitlyn Raitz plays cello on this track, and Remi Arsenault is on bass. There is also some nice work both on banjo and dobro. By the way, they put out a video for this song, which shows them recording the tune, as well as some concert footage. This song is followed by “I Go Where You Go,” the album’s title track. It is a sweet, kind of corny tune designed to make you feel good. “I hope you’re feeling it too/’Cause everything’s better with you.” Oh, I am definitely feeling it.

One of my absolute favorites is “Steal Ya.” Right from the beginning I am in love with it, with the fiddle and its great old-time European vibe. About the woman’s affection, is it flattering or frightening? Maybe a bit of the first and a whole lot of the second. “The time for talk has found its end/Say goodbye to your little friend/Grab your coat and follow me/Let’s go make some history.” I love the way Lisa delivers the lyrics to this one. Her vocal performance is one of the elements that make this song something really special. And of course how can you help but love that fiddle? Another of this disc’s great tracks is “I Never Knew Her Name,” a slow, wonderful waltz, about missing a woman who once came to the diner where the guy worked. “Well, she don’t come round here no more/I keep looking to the window, staring at the door/Though I never knew her name/Still, I miss her just the same/No, she don’t come round here no more/No, she don’t come around here no more.” John sings lead on this one. And when the man of this song first sees her, he sings, “It felt like a movie about to begin.” Ah, such a good feeling. Then later he sings, “Our movie was over before it’d begun.”

“Peg Leg Joe” begins with some wonderful guitar, and features some nice blending of voices. “I need to get across the river/I need to see the other side/The way I’m living ain’t fit for a dog/I shouldn’t have to say it, but it ain’t right.” This song has a great, cool vibe, and I dig Lisa’s work on washboard. Mark Hill plays guitar on this track. Mark also plays guitar on “The Best We’ll Ever Know,” a really sweet tune that is another of this disc highlights. I’m also quite fond of the beautiful folk song “Back To Eden,” again featuring some good vocals as well as some nice touches on mandolin. “It’s a long way back to Eden/The road is overgrown/It’s a long way back to Eden/We’re traveling alone.”

The CD concludes with its only cover tune, “Rabbit In A Log,” a fast-paced fun bluegrass number which has been played by a lot of artists over the years. Folks like Bill Monroe, The Stanley Brothers, and The Hillbilly Goats have delivered renditions of this song. This version by Tomato/Tomato is really good, and it is this track that features Ray Legere on guitar.