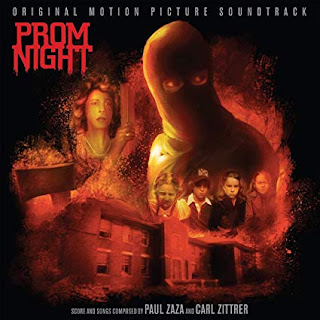 My grandparents had a fairly large collection of movies on videocassettes, and when I was growing up, my brother and I would spend weekends at their house, watching movie after movie. One of the movies we watched over and over was Prom Night, which we both found scary at the time. One of the elements that stayed with me over the years was the film’s music, particularly that theme song, which gets in my head periodically. Now, after decades, we finally get an official CD release of the full soundtrack, score and songs, including some tracks that weren’t used in the final cut and were previously unreleased, even unofficially. It’s been a long time coming, but we finally have the soundtrack we’ve been wanting. And this release includes “Dance Till You Die: The Making And Scoring Of Prom Night,” a piece written by Gergely Hubai, along with a note from Silvio Barretta, who co-produced this album.

The tracks are divided into four groupings, the first being the score used in the film. The music was composed by Paul Zaza and Carl Zittrer, who also – together or separately – wrote the music for such movies as Murder By Decree, My Bloody Valentine, A Christmas Story and Porky’s. The pieces in this first section are arranged basically in the order they occur in the film, beginning with that great opening. That first scene creeped me out when I was a kid, especially the very beginning when you hear the children but don’t yet see them. Some of this music gives me the chills, and would be a perfect choice to play on Halloween if you are eager to frighten the neighborhood kids. I particularly love “Prom Night Suspense Theme,” with even those pauses being filled with dread and horror.

The second section of music is made up of pieces of the score that ended up not being used in the film. Most of these are very short, with only a few being more than a minute long. The most significant piece, at least in terms of length, is “Haunting Robin,” which has a fantastic tension and an eerie quality. “Calm Before The Storm” is another of this section’s best selections. And a piece titled “Eerie” touches upon some of the same themes as “Opening.” “Hunted” is a suspenseful piece making interesting use of percussion.

The third section is made up of the songs used in the film. Now this is back in the day when “original motion picture soundtrack” meant just that, that it contained original music. Sure, the reason behind the writing of these songs might have been financial, that the budget didn’t have room for the purchasing of rights to popular songs, but the results are original and memorable tracks. The first of these songs is “Dancin’ In The Moonlight,” obviously not to be confused with the King Harvest hit song from the 1970s. This is a pretty solid disco song, about dancing and having no cares, working in contrast to what we know is about to happen in the film. I like that kind of funky instrumental section toward the end. That’s followed by “Love Me Till I Die,” and of course I appreciate the delightfully morbid humor of this one. By the way, these songs are also presented in basically the order you hear them in the film.

The main song of this section is “Tonight Is Prom Night,” the most memorable of the tunes from the film, and the one that gets in my head to this day. Until now I had never heard it without also seeing the accompanying images on screen, and it’s interesting to find it really works on its own. I love the way it starts, with a little tease and then bursting in with that beat. “Prom night/Everything is all right.” Oh yes. Many of the lines have a humorous bent when taken in the context of the film – “Tell me you will love me forever” and “Tonight is the night for me and you” – but without that context, this song is a fun, upbeat, innocent, totally enjoyable number. That’s followed by “Changes,” a tune that itself has some interesting little changes and makes good use of horns. “Time To Turn Around” is a good title for a song in a horror film, right? Look behind you! There’s not all that much to this song, but I suppose that can be said about a whole lot of disco songs. That’s followed by “Fade To Black,” that moving song that plays as the closing credits begin. It’s probably the film’s best song, and is the last song of this section.

The disc’s final section is made up of songs that were not used in the movie, beginning with a disco song titled “Prom Night.” “Tonight Is Prom Night” is a better song, so it’s not difficult to see why this one wasn’t included. But I’m glad it’s included here, and I like that instrumental section with saxophone toward the end. That’s followed by “Disco Out The Back Door,” a simple but fun number, and then “You Can Be What You Want To Be,” probably the best of the previously unreleased songs. This one has a delicious groove and is certain to get you moving. “Another Disco Funk Track” is also fun, with a bit of a New Orleans vibe, which I like. “Funk Dat Disco” has, as you’d expect, a funky rhythm. The disc then concludes with “Burnin’ With Desire.” “I can’t fight it, I won’t even try/Go on burnin’, baby, ‘til the day I die/Ooh, the day that I die.”