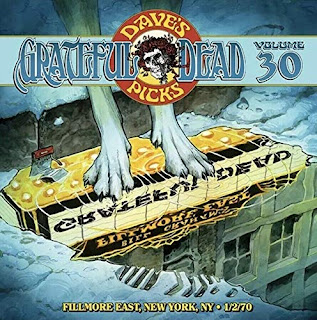 The year 1970 was one of the most interesting and exciting for the Grateful Dead. Their sound was evolving  to incorporate more folk and country elements, yet the band was also still immersed in their psychedelic exploration. It was the year that would see the release of their two best records – Workingman’s Dead and American Beauty. Their first show of the year was in New York at the Fillmore East. And actually, that night they did two shows. Two sets, but each set was a different show. Both are included on Dave’s Picks Volume 30, along with some music from the following night at the same venue. The liner notes for this set include two personal accounts of the night from fans.

The first disc contains the entire early show, plus the first couple of songs from the late show. The band opens the show with “Mason’s Children,” a song they played only around that time and then abandoned. It’s a song I’ve always dug, ever since I heard a version played on a Grateful Dead radio show on WZLX in the late 1980s (I still have my tape of that program somewhere, I hope). This version has a good energy, and they do jam on it a bit toward the end. All in all, a cool choice for opener, with a bit of a strange ending. They follow that with “Casey Jones,” which is fiery and fantastic, Jerry really getting into it, especially vocally. Wow, a couple of high-energy numbers to get the show underway. They then slow things down with a great rendition of “Black Peter,” this version featuring some good jamming. The guys take their time with this one, which is wonderful. All three of these songs were relatively new at the time, with “Casey Jones” and “Black Peter” ending up on Workingman’s Dead (“Mason’s Children” didn’t make the cut).

Following “Black Peter,” there is some banter with the audience, and then some tuning. “You’ll thank us for it in the end,” Jerry says. The band then delivers a good, brisk “Mama Tried,” and follows that with “Hard To Handle,” the only Pigpen song of the first show. And perhaps because it’s his only real moment to shine, Pigpen seizes it and delivers a damn fine performance, with the band solidly jamming behind him. The jam kind of takes over, the band really rocking here. They continue in that energetic realm with a grooving “Cumberland Blues,” another song that would be included on Workingman’s Dead. Then we get the full “That’s It For The Other One,” beginning with “Cryptical Envelopment.” I dig this song, apart from the line “His mind remained unbended,” which always strikes me as kind of stupid. A drum solo emerges from “Cryptical.” They take the solo to a kind of quiet place so that then “The Other One” can burst open with a tremendous force, a fantastic touch. This version of “The Other One” comes on strong, unhinged, almost angry, like a monster hurling itself into a storm with the intention of defeating weather, and likely to do just that. And of course this is where the real jamming happens. “The Other One” slides nicely back into “Cryptical,” and then into “Cosmic Charlie.” I love this song, and when I was a teenager I had a fish named Cosmic Charlie, a beautiful blue fish that would dance whenever I’d play Grateful Dead tapes. Seriously. No other music moved him. Only Dead. Once he even jumped clear out of his bowl, landing on the shelf, so I had to purchase a much bigger tank for him since I wasn’t going to stop listening to my Dead tapes. I wish I had seen the Dead play this song, but they had stopped performing it by the time I saw my first show in 1988. This is a really good version, by the way. And that’s how the early show ends.

The late show opens with a really sweet, cool version of “Uncle John’s Band,” followed by a gorgeous and interesting version of “High Time,” two songs that would be included on Workingman’s Dead.

The second disc picks up where the first disc left off, beginning with a kind of odd and delightful rendition of “Dire Wolf,” with Jerry even urging folks to sing along with the chorus. Tom Constanten’s presence makes this rendition different from others. That’s followed by “Easy Wind,” with Pigpen giving us a nice bluesy vocal performance. This version feels sluggish at moments near the beginning, but finds its groove, and the band ends up jamming on it for a while. They then do “China Cat Sunflower.” I really enjoy versions of this song from this time because of TC’s work on keys. That catchy part feels an integral part of the song’s structure to me. “China Cat” slides into “I Know You Rider,” as it nearly always did. Then they covered “Good Lovin’,” giving an energetic rendition of this fun rock song. The jam is kind of interesting, a bit choppy. Bobby follows that with “Me And My Uncle.” Bob then tells the crowd, “We’re going to play the broken string blues again.” As they’re fixing stuff on stage, you can hear some stage banter. While things are getting put right, Bob Weir begins “Monkey And The Engineer” solo, with fellow band members joining in. It’s a really cool, loose rendition, a nice treat.

The disc then shifts into music from the following night, January 3rd, at the same venue. On our tapes, we used to call this stuff “filler,” you know, because more music was preferable to empty space at the end of a tape. What we get is the first song of the early show, “Morning Dew.” Yeah, a “Morning Dew” opener! Kind of wild, right? Talk about getting right into the thick of things. And this is a good version. It is mellow as it begins, but certainly builds in power. It goes into some exciting territory toward the end. The disc then skips to partway through the late show that night for a good version of “Big Boss Man.” The disc skips again to the end of the late show, giving us the final three songs of the night. “Dancing In The Street” is a lot of fun, and includes a drum solo, with Bob then trying to conduct the audience in a three-part clapping bit, which is certainly unusual. That song wraps up the set, and then the encore begins with crowd-favorite “St. Stephen,” the audience getting excited at the first few notes. I love how delicate and intimate that one section is before the band comes blasting in again. That leads directly to “In The Midnight Hour” to finish the night.

The third disc then contains the rest of the late show. And though the year was then 1970, this chunk of music is pure 1969. The four songs on this disc (which total approximately seventy-five minutes) are ones the Dead played a lot in 1969, and in fact they are presented in the same order on the Live/Dead album. The disc opens with Bob joking a bit about the band being ready. Remember, this follows “Monkey And The Engineer.” Anyway, the disc opens with a half-hour “Dark Star.” The band eases into it, no hurry here. I always love the interesting percussion used in versions of this song from this time. And of course TC is totally in his element here. It is after the first verse that things get weird. It’s almost like they’ve slipped into some other realm, and are looking around to get their bearings before adding any thought of their own to the space. Perhaps the void is deeper, more formed than what they might fill it with. This is a strange, fascinating, possibly frightening “Dark Star,” and reason enough to own this volume of Dave’s Picks. As you float in darkness, lights and sounds will streak past you, some close enough to burn, or to set you off in some trajectory, not of your own choosing. But after a while you find you can gain some control of your movements, and your breathing relaxes enough that you can more fully take in your surroundings. You find small beings there who are just as interested in you as you are in them. Questions abound, and are asked and perhaps answered through telepathy, and a trust is established. You can now integrate yourself into their existence, their space, but once that’s accomplished you leave them to explore on your own. That’s when things get closer, louder, and a groove is found, and things seem good, even somewhat steady, and you’re by the side of a river, with flowers above. A woman rises from the water, takes your hand and engages you in dance, any remaining fears disappearing as her hand touches your skin. After a while the band delivers the song’s second verse. And everything is gentle now, relaxed. Moments after the second verse, the band shifts into “St. Stephen,” the crowd cheering. This is a really good, rousing, solid “St. Stephen,” and it includes the William Tell section (unlike the version on the second disc).  “St. Stephen” moves directly into “The Eleven,” a complex and intriguing song (it almost always strikes me that way). This version is popping with energy at times, and then deliberately fragments near the end. Then suddenly we are lifted up by the opening of “Turn On Your Lovelight,” which rocks us out of the gate. The crowd is certainly appreciating what the band is doing here, though Pigpen teases “Hey, I can hardly hear you.” And then, of course, it’s time for him to shine as he engages the audience and directs the band. He tells the audience what to do if they’re lonely in the night, first to take their hands out of their pockets. The crowd claps along to his rap, which is wild. “Damn it, woman, turn on your light, you know what I want.” And listen to everyone singing “Shine on me.” What a great version. This is an excellent night of music, and I’m glad it has received a proper release.

Disc 1
Disc 2
Disc 3
Dave’s Picks Volume 30 was released in early May, 2019. My copy arrived on May 7th. It is a limited edition of 20,000 copies. And if you ordered the full year’s subscription, the bonus disc arrived with this set. I intend to post a separate review of the bonus disc.
Posted by Michael Doherty at 11:12 PM