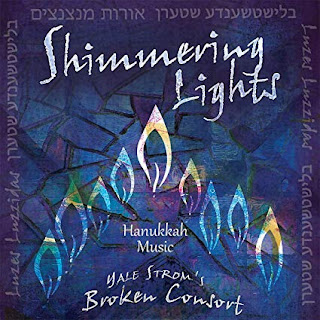 Happy Hanukkah, everyone! No, it’s not anywhere near Hanukkah yet. And no, I’m not Jewish. But neither of those things matter when listening to the new album from Yale Strom, Shimmering Lights. The music is not only excellent and at times gorgeous, but it’s also needed right now. We are living in a dark time when racism and anti-Semitism are once again on the rise, when one of the two major political parties in this country has essentially become the Nazi Party. We need to reach out to the human qualities that everyone (well, nearly everyone) possesses, and this music does just that. I don’t speak Hebrew or Yiddish, but the disc’s extensive liner notes provide English translations of the lyrics. However, the first time I listened to this album, I didn’t look at those translations. I just let the music itself, including the vocals, and the passion of those vocals, speak to me, and it was a truly moving experience. I recommend it. Yale Strom’s Broken Consort uses quite a wide range of styles in these tracks, and the music, while mostly traditional, feels both fresh and vibrant. The musicians on this album include Yale Strom on violin, Fred Benedetti on acoustic guitar, Sara Caswell on violin, Alexander Greenbaum on cello, Amos Hoffman on oud and electric guitar, Jeff Pekarek on contrabass, David Wallace on viola, and Elizabeth Schwartz on vocals.

The album opens with “Maoz Tzur,” a beautiful piece featuring some absolutely phenomenal and moving playing by Amos Hoffman on oud. There is a nice instrumental section before the vocals come in. Then the strings have a strong and glorious (and at times intense) voice of their own. This track takes us on an intriguing journey, to the point where I was surprised when the vocals came back in. They sort of pulled me back to Earth in a way. That’s followed by “Khanike, Oi, Khanike,” which has a very different style and vibe, more of a folk vibe. It is a playful, totally enjoyable tune, this one driven by the vocals, at least during the first section. Listening to it, I imagine a large room of people listening with me. It feels odd to be alone listening to this track. There is more wonderful work on strings during the instrumental section. At the end, the lyrics are sung in English. “And while we are playing/The candles are burning low/One for each night, they shed a sweet light/To remind us of days long ago.”

“Kita’l Tas” begins with some beautiful and impressive work on violin, and features more incredible playing throughout. It has a somewhat more serious tone. This track has a tremendous power, particularly as it builds toward the end, transporting you to another realm, a more meaningful place, of beauty and devotion. Then “Latkes” has a sweet, pretty sound at the start, a sound that makes me feel good, relaxed. The track takes a turn when the vocals come in, a steady rhythm on strings backing the vocals, slowly building. This section is totally enjoyable, and I can’t help but love the vocals, which have a somewhat playful vibe. But the strings during the instrumental sections are really the stars of this track. There is also a really nice lead on electric guitar. That’s followed by “Azeremos La Merenda,” an intriguing track with different sections. The first time I listened to this album, this track struck me as taking a more serious or somber approach. But after reading the English translation of the lyrics, I have to alter my thoughts on it.

“Beshir Mizmor” is a beautiful instrumental track that works carefully, slowly to draw us in and ease our tensions. This is an original composition by Yale Strom. Then suddenly the strings take over in a strong, almost forceful way, taking the track in a different direction, raising us up. There is cheerful vibe to their playing that I appreciate. Then it eases into another gorgeous section. That is followed by “Akht Kleyne Brider,” which is a delight from its opening. This jazzy tune features some wonderful stuff on guitar, and a cool vocal performance. What a pleasure it is to listen to this track. The excellent, joyful playing is perhaps just what we need to lift us from the dark mire that has taken over the country. “La Fiesta De La Hanukia” features more wonderful work on strings, and is a fun and enjoyable track. That’s followed by “L’Chvod Chanukah.” Right from the start, there is an energy to this song that promises some excitement, and it delivers. I enjoy just letting this track carry me away. It is one of my favorites. Toward the end, the lyrics are sung in English. The disc then concludes with an original tune, “The Fool Over Yonder,” written by Yale Strom and Elizabeth Schwartz. This one has kind of a cool, jazzy vibe from the start, and its lyrics are sung in English. “The world has enough for mankind’s need/But never enough for mankind’s greed/If the link is broken the whole chain breaks/Got to work together or repeat mistakes/Come on, children, come on.”

CD Track List
Shimmering Lights is scheduled to be released on CD on June 15, 2019 (though apparently it has been available as an import since last October).
Posted by Michael Doherty at 11:57 PM