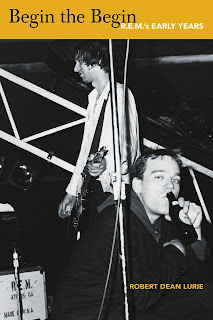 I managed to see R.E.M. in concert only once, in 1989 during the tour supporting the Green album. But I’d been a fan for a few years before that, thanks to “Driver 8,” which received quite a bit of airplay, and thanks to friends who turned me on to the band’s first few records. It is the band’s early period, leading up to the signing with Warner Bros., that author Robert Dean Lurie covers in his new book, Begin The Begin: R.E.M.’s Early Years. It is a completely enjoyable and interesting look at the band’s formation, personality and surroundings, as well as the music.

The book gives a good sense of the place where R.E.M. was formed and the music scene that existed there, with some attention paid to The B-52s and Pylon. While the members of R.E.M. were not interviewed for this book, many of the other folks who played important roles in the band’s development were, and because of Lurie’s style, you begin to feel you know these people. A fairly vivid picture is painted of Athens and the scene there. You even begin to feel familiar with some of the buildings, including the old church where R.E.M. was writing and creating music, and where they performed their first concert.  Regarding that show, which was performed in honor of Kathleen O’Brien’s birthday, Lurie writes: “Perhaps the biggest surprise for those in attendance was just how animated Michael Stipe could get in front of an audience. Typically quiet and withdrawn, he turned into a spinning, vibrating maniac when performing the more aggressive songs” (p. 75). And though he doesn’t personally interview the members of R.E.M., he does quote from other interviews with them.

There are plenty of wonderful details and anecdotes along the way, like that Michael Stipe dressed as Frank-N-Furter when attending a screening of The Rocky Horror Picture Show, and about the time R.E.M. opened for XTC. And a different explanation for the band’s name is offered, that it is a reference to photographer Ralph Eugene Meatyard. The writing has a friendly, conversational tone, and Robert Dean Lurie occasionally takes little tangents, even identifying them as such. His personal approach to the subject functions to endear him to us, to place him almost like a character in the story. For example, check out this passage: “At any rate, the members of R.E.M. have always deflected questions about the band’s name, saying that it could mean anything. I suppose I ought to take advantage of the friendly, informal line of communication I have with the R.E.M. office and push for an official answer to this one question. But you know what? I can’t bring myself to do it. What I Michael suddenly decided to give a frank answer? I wouldn’t be able to bear it. Such an outcome would run counter to the sense of mystery that drew so many of us to this band in the first place” (p. 83). Writing like that makes us feel that he is as much a fan of the band as we are.

Robert Dean Lurie gets into the stories behind some of the early songs, such as “Don’t Go Back To Rockville” and “Radio Free Europe,” as well as the image on the Murmur album cover. And again, Lurie’s playful, casual tone works well as he writes about the often ambiguous meanings of different songs, often reflecting the thoughts of other fans as they try to decipher certain lines. “Oh, what’s the use? I give up. What the hell is a harborcoat, anyway?” (p. 178). The author also gets into some of the other bands and artists that became linked to R.E.M. in one way or another, folks like The Replacements, Matthew Sweet, and The Minutemen. The book includes several photos, too, including one of the old church. As I said, this book is a totally enjoyable read. It’s like a knowledgeable friend telling you the story of his favorite band, with tangents, recommendations and all.

Begin The Begin: R.E.M.’s Early Years was published on May 14, 2019 through Verse Chorus Press.
Posted by Michael Doherty at 2:07 PM