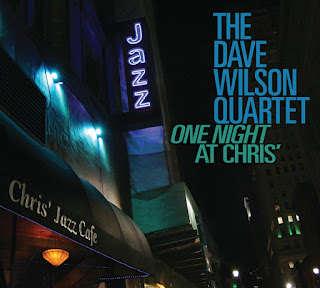 I’ve been a Grateful Dead fan since I was twelve or thirteen. And though the band came to a sudden end nearly twenty-five years ago, their music has continued to thrive, some of the songs becoming almost standards. Lyricist Robert Hunter is reported to have once said that if any Grateful Dead song might become a classic or standard, it would be “Friend Of The Devil.” Seems like he was onto something there. It is certainly the Dead song I’ve heard covered the most, and it’s been performed in several different styles. One Night At Chris’, the new live album by The Dave Wilson Quartet, features a good jazz rendition, and that is the track that sparked my interest in the release. Joining the saxophonist on this album are Kirk Reese on piano, Tony Marino on acoustic bass, and Dan Monaghan on drums. The music here is a mix of covers and original material. It was recorded at Chris’ Jazz Café in Philadelphia, but you don’t hear all that much from the audience. It seems to be edited in such a way that the crowd is cut from the end of the tracks, with at least three tracks actually fading out.

The disc opens with an original tune, “Ocean Blue,” written by Dave Wilson (on the CD case it is erroneously titled “Ocean Blues”). This track jumps and moves, and features some joyful and solid playing, particularly by Dave Wilson, who seems to have a tremendous amount of energy. We’re a few minutes into the track before he relaxes so that Kirk Reese can lead on piano. That’s followed by “Friend Of The Devil,” which – as I already mentioned – was the track that first got me excited about this release. It’s an interesting rendition. The pace is more in line with the original version from American Beauty, rather than the slowed-down versions the band performed in concert later on. This surprised me. I had fully expected a nice, slow jazz exploration of the song, but we get something exciting and animated, popping and bursting along. It’s an instrumental rendition, obviously, and at first I find myself singing along. But soon this cool jam really takes over, succeeding on its own, apart from Hunter’s lyrics. There is a brief drum solo toward the end. By the way, this isn’t the first time that Dave Wilson has covered the Grateful Dead. On his 2015 release, There Was Never, he delivered a beautiful and energetic rendition of “Cassidy.” The band then does slow things down for a nice take on The Beatles’ “Norwegian Wood (This Bird Has Flown),” Dave Wilson’s saxophone delivering the vocal line, then venturing into other territory. This track also features a cool lead on bass, which is when things really start to get interesting. And when the sax returns to that main line, it seems to work even better and sound even prettier. This is a wonderful rendition.

The band gets us moving again with “My Own Prison,” a tune written by Scott Stapp and Mark Tremonti, and originally performed by Creed (a band I never cared for). Yes, it is a surprising choice, but it works, and the track features some groovy work on piano. This version is far superior to the original. It moves and breathes, unlike the original, which seems to drag. The Dave Wilson Quartet also delivers a seriously good cover of “God Only Knows,” one of the best Beach Boys songs. This song is so beautiful, and these guys handle it nicely, taking the song into some unusual territory, but never straying too far from its core. The saxophone soars gloriously in this rendition. This is a song that the Dave Wilson Quartet also included on There Was Never. That’s followed by an original tune, “Untitled Modal Tune,” one that moves at a good clip, that bass pushing things along, and features some delicious and impressive stuff on piano, Kirk Reese’s fingers dancing over the keys. And check out that work on drums, particularly during Dave Wilson’s lead on sax, which itself rises and twists and explodes in wonderful ways. Yeah, all four musicians are on top of the world here, and toward the end, this track just comes at you with a delightful force. Listen to those brief drum solos, and the horn blaring, and the piano rushing toward a climax. And yet that isn’t the climax, which is fine, because I don’t really want this one to end, but rather want to see where they will take it next, where it will take us. This is one of my favorite tracks.

So, as I mentioned, the main thing that got me excited about this release was the Grateful Dead cover. But the other track I was particularly eager to hear was the eleven-minute version of “Summertime.” I’ve said it before, but you can never go wrong with Gershwin. This is not a mellow rendition, but one that crackles and shakes, with the piano having a whole lot to say here. And the saxophone leads the band right to the rooftops and spires and beyond. A little more than halfway through, there is a drum solo which begins somewhat softly, then gathers force and energy. This isn’t the first time The Dave Wilson Quartet has covered this one. Versions of “Summertime” were included on both There Was Never and My Time. The disc then concludes with an original tune, “Spiral,” which has a different sort of energy, the rhythm propelling it along its path with a joy and determination. This is yet another of my favorite tracks, and it also includes a good drum solo. It fades out, even as the party is clearly continuing.

CD Track List
One Night At Chris’ is scheduled to be released on May 27, 2019. By the way, on the CD case spine, the name of the band is listed as “Thew Dave Wilson Quartet,” an odd mistake.
Posted by Michael Doherty at 4:06 PM