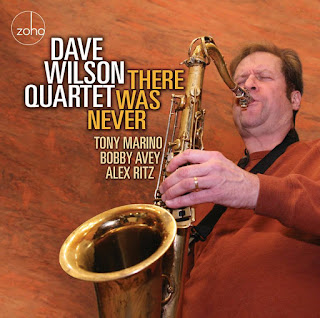 There Was Never, the new album from Dave Wilson Quartet, features mostly original material, written by the saxophonist. And the choices of the CD’s few covers are good ones from my perspective, being three songs I love. On this release, Dave Wilson is joined by Bobby Avey on piano, Tony Marino on acoustic bass and Alex Ritz on drums. (Tony Marino had played on Wilson’s previous release, 2010’s Spiral.) This album was recorded in two days of February this year, at Red Rock Studios in Saylorsburg, Pennsylvania. The CD includes liner notes by Bill Milkowski, featuring quotations from an interview with Dave Wilson, as well as some photos.

The opening track, “The Time Has Come,” begins with an interesting rhythm, and soon Dave Wilson’s saxophone is soaring and shouting above it. It feels like bordering on chaos at moments, but I love the glorious relentless energy of this one, with leads on saxophone and then on piano, the drums continuing to rumble wildly throughout. And then, nearly five minutes in, the tune relaxes a bit, like the day is ending and the song, almost reluctantly, is turning in. But then there is a collective changing of mind, and it kicks again, as if intending to blow on through the night.

The first of the album’s three covers is “Cassidy,” one of my favorite Grateful Dead songs, one they played at one of the best shows I ever attended – June 17, 1991 at Giants Stadium. It originally appeared on the Bob Weir “solo” album, Ace, which was released in 1972. I got a chance to talk about this song with lyricist John Barlow a few years ago when I met him at a Yonder Mountain String Band show. I told him it was always one of my favorite Dead songs, and he told me it was one of his favorites too. There is something really beautiful about “Cassidy,” and Dave Wilson Quartet definitely taps into that beauty in this version. “Cassidy” can also include some excellent jams (like that version from June 17, 1991), and this rendition has the energy of some of the best jams, always returning to that familiar theme. In the liner notes, Dave Wilson is quoted as saying he went to approximately thirty Dead shows, and his fondness and appreciation for the band’s music is apparent in his interpretation of “Cassidy.”

That’s followed by “God Only Knows,” which is probably my favorite Beach Boys song. It’s such a beautiful song, written by Brian Wilson and Tony Asher, and originally included on the Beach Boys’ Pet Sounds album. And Dave Wilson keeps the tempo slow and sweet, his saxophone following that pretty vocal line. This is a really nice version, and Dave Wilson treats the material respectfully while certainly adding his own touch.

“There Was Never,” the CD’s title track, is one of my favorites. It has several sections, and yet maintains a great flow. There is even a bit of funk here that works really well. I am particularly fond of what Bobby Avey does on piano here. And Alex Ritz provides some fantastic drumming (toward the end there is a drum solo, which is really good, but it’s his playing earlier that really impresses me). And throughout this piece you can hear what a damned good bass player Tony Marino is. The band is really together, through all the changes, and there is also a sense a fun, of play here that is wonderful.

“Master Plan” is a wild and delightful beast of a tune, with the saxophone blowing madly over a great rhythm. It begins easily enough, especially after the intense playing of the previous track, “Smooth Sailing,” but it’s not long before things get swinging, and then just launch off from there. Check out what Tony Marino does on bass like four minutes into this one. There’s also an interesting section with some nice, quiet touches on keys like six minutes in, and then it builds again from there. This is a fantastic track.

I’ve said it before, and I’ll undoubtedly say it again, but you can never go wrong with Gershwin. The third and final cover on this album is “Summertime,” originally written for Porgy And Bess. There have been thousands of recordings of this song over the years. I think the first one I heard was that by Janis Joplin, back in my early teens. The version on this CD has some interesting changes, like the groovy bass lead only a minute and a half in. I love where the song goes from there, the way the piano and drums work together to create something of an intense rhythm. This is certainly not a mellow rendition of the song.

The CD then concludes with “On The Prairie,” an original composition, with a somewhat whimsical feel near the beginning. This one also has some really sweet and pretty moments.

CD Track List
There Was Never is scheduled to be released on November 6, 2015 through Zoho Music.
Posted by Michael Doherty at 12:17 AM