The Winding Stream: The Carters, The Cashes And The Course Of Country Music (2015) CD Review 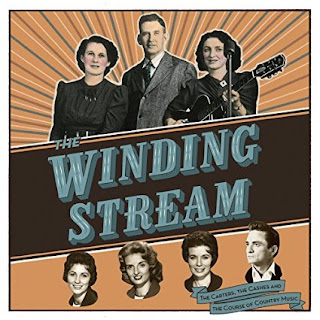 The Winding Stream: The Carters, The Cashes And The Course Of Country Music is the soundtrack to the documentary film of the same name about the Carter Family and their influence on country music. It includes some great old recordings by The Original Carter Family, as well as more recent tracks from folks like John Prine, Grey Delisle and Roseanne Cash. It’s probably impossible to enjoy country and folk without having a deep appreciation for The Carter Family and what they’ve done for music, and this CD will remind folks of just how great their influence is, and, more importantly, how great their music is. This CD includes liner notes by Beth Harrington, who directed the documentary. I do wish the liner notes contained specific information about the sources of each song, where and when the recordings were made, and the albums the songs were originally included on. But that is a relatively minor complaint. The liner notes do include some good information, as well as a few photos, and besides, it’s the music that is important here.

This disc opens with John Prine’s fantastic rendition of “Bear Creek Blues,” a song he included on his album Fair & Square, getting things off to an energetic start. This is folk with country and bluegrass elements, including that delicious pace. John Prine also included this song on In Person & On Stage. It’s followed by a sweet folk rendition of “Lord, I’m In Your Care” performed by Grey Delisle and Murry Hammond. Grey Delisle also had a song on the 2007 compilation Anchored In Love: A Tribute To June Carter Cash. And Murry Hammond is of course known for his work with The Old 97’s. This disc also includes Hammond’s rendition of “In The Shadow Of Clinch Mountain.”

Then the album gets into some recordings by The Carter Family, beginning with one of their most famous tunes, “Bury Me Under The Weeping Willow Tree.” For anyone who is not familiar with it, here are some of the lyrics: “My heart is sad and I'm in sorrow/For the only one I love/When shall I see him, oh, no, never/’Til I meet him in heaven above/Oh, bury me under the weeping willow/Yes, under the weeping willow tree/So he may know where I am sleeping/And perhaps he will weep for me.” That is followed by one that is perhaps not quite as well known, “Single Girl, Married Girl.” “Keep On The Sunny Side” is a song that always makes me happy, but the version here is only like fifteen seconds long, just a little tease. It’s a live recording with an introduction, and then goes straight into an introduction of “Cannon Ball Blues.”  In the liner notes, Beth Harrington includes an interesting anecdote about a performance of “I’m Thinking Tonight Of My Blues Eyes,” and that song is included here as well. Here is a taste of the lyrics: “Oh, you told me once, dear, that you loved me/You said that we never would part/But a link in the chain has been broken/Leaves me with a sad and aching heart.”

In addition to tracks by The Original Carter Family, there are songs here by other configurations of Carter family members, including a version of “Wildwood Flower” by Mother Maybelle and The Carter Sisters, “Sweet Fern” by Maybelle and Sara Carter, and “Will The Circle Be Unbroken” by Johnny Cash and The Carter Sisters. “Will The Circle Be Unbroken” is a live track, with a nice introduction from Cash about first hearing this tune on the radio, and about his relation to the family.

This CD includes George Jones’ rendition of “Worried Man Blues,” a song he included on The Carter Family tribute album, The Unbroken Circle. This is a song that has been recorded by many artists over the years. I think the first version I heard was by Pete Seeger, but it’s also been done by Woody Guthrie, The Kingston Trio, and Ramblin’ Jack Elliott (and, oddly, by Devo). I really like this version by George Jones; it has a playful vibe. Carolina Chocolate Drops do a good, faithful rendition of “Hello Stranger.” That shouldn’t be a surprise, as this group won a Grammy for Best Traditional Folk Album a few years ago. “Hello Stranger” is another tune that has been covered by numerous artists over the years, including Emmylou Harris.

Kris Kristofferson joins The Nitty Gritty Dirt Band for a sweet version of “Gold Watch And Chain,” a song that was also included on The Unbroken Circle. It’s followed by a fun live rendition of “Step Light Ladies,” performed by The Home Folks, Joe Carter and John McCutcheon. The album concludes with Rosanne Cash’s pretty rendition of “The Winding Stream,” another song included on The Unbroken Circle, and the perfect closing number. What a ridiculously talented extended family.

CD Track List
The Winding Stream: The Carters, The Cashes And The Course Of Country Music is scheduled to be released on October 16, 2015 through Omnivore Recordings. Now I need to see the film.
Posted by Michael Doherty at 5:14 PM