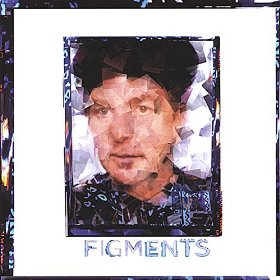 Anton Fig is known for being the drummer on Late Night With David Letterman and The Late Show With David Letterman, and he has appeared on numerous albums over the years. His first solo album, Figments, which was originally released in the spring of 2002, features an interesting variety of styles and different musicians for each track. Many of these musicians and vocalists are people with whom he had worked before, appearing on their albums. Here they get a chance to return the favor. This CD features original material, written or co-written by Anton Fig. And in addition to drums, Anton Fig plays rhythm guitar and bass on this album. Many of these tracks (though not all) are quite good.

The opening track, “Home,” features Blondie Chaplin on vocals and guitar. This track, particularly because of the vocal approach, reminds me of Peter Gabriel. It’s a cool song, and it uses some African rhythms (Anton Fig was born in South Africa). Mo Gee is on flute, and Bakithi Kumalo plays bass on this track. “Home” was written by Blondie Chaplin and Anton Fig, as was the following track, “Hand On My Shoulder,” which also features Bakithi Kumalo on bass. “Hand On My Shoulder” has a lot of late 1980s pop influences, and makes me think of Elton John and Peter Cetera. Brian Wilson provides some backing vocals on this track. Blondie Chaplin had briefly been a member of The Beach Boys in the early 1970s. I really like the lines, “Yesterday’s gone/Tomorrow will never be the same.” There are more 1980s sounds on “Inside Out,” which features Ivan Neville on vocals, Catherine Russell on backing vocals, and Randy Brecker on flugelhorn.

With “More Than Friends,” there’s not much to speak of lyrically, but that’s Richie Havens on vocals, and he takes these average lyrics and raises them to something much better. Catherine Russell again joins on backing vocals, and this track features Enrique Vargas on flamenco guitar.

Anton Fig was a member of Frehley’s Comet for a few years, and Ace Frehley joins Anton Fig on lead guitar on “Know Where You Go.” This is a hard rock song that I don’t care for at all. It features Sebastian Bach (from Skid Row) on vocals. I could also do without “Heart Of Darkness,” with its verses delivered as rap. However, the instrumental section at the end, with the cool percussion and Lew Soloff on trumpet, is wonderful.

One of the most interesting tracks is “3:4 Folk,” which features both Richard Bona and Amit Chaterjee on vocals, creating an unusual combination of styles. And of course Richard Bona also plays bass on this track. This one does remind me a bit of Sting.

“Jan/Feb/March” is a children’s song designed to teach kids the months (it’s also been called “Months Of The Year” and “The Calendar Song”). It’s certainly unexpected on this CD, and has a ridiculously fun and energetic rhythm, plus a horn section. This song is about nothing, but is oddly one of my favorite tracks, like when They Might Be Giants sing the alphabet in “Who Put The Alphabet In Alphabetical Order.” Tony Cedras is on vocals, and also plays piano, accordion and banjo. That’s followed by another of my favorites, “Tears,” a really nice instrumental track featuring Tony Cedras on piano and accordion. This one too has a horn section: Chris Botti on trumpet and Andy Snitzer on saxophone. And I dig the bass by Chris Minh Doky.

The album concludes with its other instrumental track, “KWYG II,” which features Oz Noy on lead guitar and Chris Palmero on organ. And, actually, there is a hidden track after this one: a bit of studio banter; then, after another pause, we're treated to a bit of a cappella singing from Brian Wilson, which is very pretty. This is the isolated track of his harmonies from “Hand On My Shoulder.”

CD Track List
Figments was released on August 14, 2015. The original issue from the spring of 2002 was a limited-edition pressing.
Posted by Michael Doherty at 3:32 PM