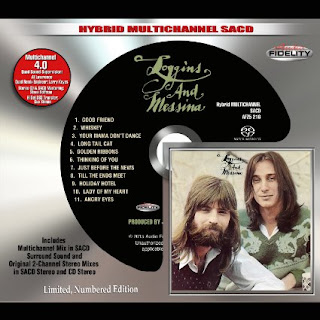 I’ve been a fan of Loggins And Messina since I was pretty young, and got to see Kenny Loggins perform some of this music at a concert in Portland, Oregon in 1993. Most of my Loggins And Messina albums are on vinyl, including their 1972 self-titled album. But now Audio Fidelity has released Loggins And Messina on a hybrid multichannel SACD, in a limited, numbered edition. I’m not sure how many of them were made, but my copy is number 2063, so there are at least a couple thousand of them out there. This is the perfect chance to revisit some of their earliest and best music, and this album includes the big hit “Your Mama Don’t Dance.” Loggins And Messina was the duo’s second album together, following 1971’s Kenny Loggins With Jim Messina Sittin’ In. This album features Rusty Young on steel dobro on one track, Young and Messina having previously played together in Poco.

The CD opens with “Good Friend,” a fun, kind of funky rock tune written by Jim Messina, featuring some good percussion as well as some nice work on saxophone. “I had a good friend some time ago/We had a good thing/And we let it show/Oh, I was a fool/I let him go/Oh, how I miss him so.” That’s followed by “Whiskey,” a pretty and short folk tune about the Whiskey A Go Go in which they sing, “Don’t sing anything pretty at The Whiskey.” I appreciate that sense of humor. And that line is followed by these: “’Cause the stony little crowd will get to talking even louder/And they’ll smother you in hissin’/And if they do, your musical insurance better be paid up.” I wonder if that still holds true at that venue (I’ve never been there).

This wonderful tune is followed by the album’s big hit, “Your Mama Don’t Dance,” which reached #4 on the Billboard Hot 100. That guitar hook is so catchy, and I love the piano part to this rock and roll tune. Michael Omartian is on piano and organ on this album. Plus, this song features saxophone. And that “Out of the car, Longhair” line always makes me laugh.

“Long Tail Cat” is the tune that features Rusty Young on steel dobro. Rusty Young and Jim Messina had been founding members of Poco. “Long Tail Cat” was written by Kenny Loggins, and is another of my favorites from this album. It has a fun back porch country vibe, and features Al Garth on fiddle. “Your daddy’s getting older and your cows are going dry/You gotta go bye, go bye bye/On a Dixie holiday.”

“Thinking Of You” was the album’s other single, and it reached #18 on the Billboard chart. This is such a sweet, positive song. “Something about your eyes/Won’t let me look away/Something about your smile/That’s making it hard to say/Whenever you’re near me/You’ve got me thinking of you.” And I’ve always liked the harmonica in this song. “Thinking Of You” was written by Jim Messina, and it’s followed by a country instrumental tune titled “Just Before The News,” also written by Jim Messina. That’s the album’s only instrumental number.

This album concludes with “Angry Eyes,” another of the duo’s most loved songs. It is the shorter version that was included on the compilation The Best Of Friends, but here you can find the full-length version, which is nearly eight minutes (more than five minutes longer than the other version). This is an excellent song, written by Kenny Loggins and Jim Messina. I love the way their voices blend here. Here is a taste of the lyrics: “You try to defend that/You are not the one to blame/But I’m finding it hard, my friend/When I’m in the deadly aim/Of those angry eyes.” And I totally dig the bass and saxophone in the instrumental section a couple of minutes in. The short version of this song is really good, but this full-length version is fantastic.

CD Track List
This limited edition SACD of Loggins And Messina was released on September 25, 2015 through Audio Fidelity. By the way, this disc will play in all CD players.
Posted by Michael Doherty at 1:10 PM