Gone With The Wind: The Remarkable Rise And Tragic Fall Of Lynyrd Skynyrd (2015) DVD Review 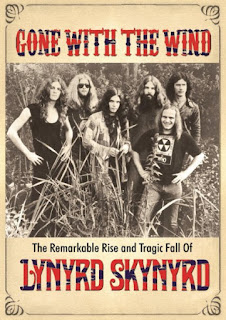 The very first time I ever drove into Alabama, just as I crossed the state line from Georgia, I turned the radio on and heard these words: “Sweet home Alabama.” Not just the song, but that very line. And I thought, is this a coincidence, or is this song played on a constant loop by every station in the area? I don’t know, but I always enjoyed the song. I got into Lynyrd Skynyrd in my early teens, picking up the band’s first album on cassette and listening to it a whole lot. But then somewhere along the way I drifted away from their music. The new documentary, Gone With The Wind: The Remarkable Rise And Tragic Fall Of Lynyrd Skynyrd, provides the perfect opportunity to get reacquainted with the band, and it has given me a deeper appreciation for the music.

Just as lead singer Ronnie Van Zant was the focal member of the band, he is the main focus of the film, which begins with some biographical information (the film is narrated by Thomas Arnold). It was attending a Rolling Stones concert that got Ronnie interested in music (and the film provides some early concert footage of the Stones). There is information about Ronnie’s early bands and the formation of Lynyrd Skynyrd in high school, when they were called The Noble Five, doing all covers, before changing the name to The One Percent and then finally Lynyrd Skynyrd. As the narrator tells us, the band’s name is “a bastardization of the name of their high school gym teacher.”

The documentary is nearly three hours long, so there is plenty of information, as well as lots of concert footage, including a performance of “Tuesday’s Gone,” one of my favorites from the debut album, and the song that gives this film its title (in the lines, “Tuesday’s gone with the wind/My baby’s gone with the wind”). There are interviews with a few of the members of Lynyrd Skynyrd, including original drummer Bob Burns (who died in April of this year, before the film was released), Ed King (guitarist with the band from 1973 to 1975), and Artimus Pyle (drummer with the band from 1975 to 1977). Ed King talks about joining the band, and about switching from bass to guitar. He also reveals quite a bit about the way the band conducted rehearsals, and about the writing of “Sweet Home Alabama.” There are also interviews with Alan Walden, the band’s first manager, and Al Kooper, who produced the band’s first few albums. Al Kooper tells us: “When I started working with them, I discovered what really made them unique. There was no, not one moment of improvisation in their whole show.” Even the guitar solos were written and memorized, which is really interesting. And of course there are interviews with friends and journalists.

There is information on the influence of The Allman Brothers Band, how they urged Lynyrd Skynyrd to write their own material, rehearse every day and work really hard, something Ronnie really took to heart. Alan Walden talks about the influence of the band Free on Ronnie Van Zant, and how Ronnie wanted to sound like lead singer Paul Rodgers. The film goes in basically chronological order, charting the band’s rise, and of course documenting each of the recordings and the changes in personnel along the way. There is some interesting stuff about the band’s use of the Confederate flag as its backdrop at concerts. Al Kooper says it was the band’s idea, that MCA would never have suggested it. Ed King says it’s simply a rebel flag, and that’s all it meant.

The documentary does focus on some of the band’s key songs, including “Free Bird” (though makes no mention of how requests for this song have become a running joke at concerts all over) and “Sweet Home Alabama,” and the latter song’s references to Neil Young and George Wallace. We hear a bit of Neil Young’s “Southern Man,” the song Lynyrd Skynyrd refers to in the lyrics. And the ambiguity of the lines regarding Governor George Wallace is discussed, and that is particularly interesting.

And of course there is plenty of information on the 1977 plane crash which took the lives of band members Ronnie Van Zant, Steve Gaines and Cassie Gaines, and ended the band. Particularly moving is Artimus Pyle’s firsthand account of the crash. There is mention of the surviving members reuniting for a show in 1987, and how that led to the current pseudo-Skynyrd. But like there is no Queen without Freddie Mercury, there is no Lynyrd Skynyrd without Ronnie Van Zant.

The DVD contains Ronnie Van Zant: Fighting Talk, which is seven minutes of extra footage about Ronnie, including some interesting anecdotes. There are also short biographies of those interviewed for the film.

Gone With The Wind: The Remarkable Rise And Tragic Fall Of Lynyrd Skynyrd was written and directed by Tom O’Dell, and was released on DVD on October 16, 2015 through Sexy Intellectual. By the way, as I was leaving Alabama that first time, I thought it would be cool to hear “Alabama Getaway” by the Grateful Dead. But no such luck.
Posted by Michael Doherty at 8:51 PM