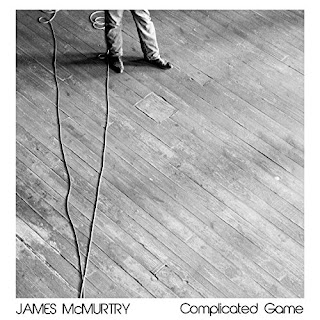 Last year I saw an excellent solo acoustic set by James McMurtry, where he focused on some new material. I was really impressed by the new songs, and those songs are on his 2015 release, Complicated Game. It is great to be able to hear those tunes again, and their impact is just as strong now as it was then. Every track on this album is seriously good. James McMurtry is such a phenomenal storyteller, and he has a voice that feels like it was designed and created specifically for the material. There is something so genuine, so honest about him as a singer. Plus, he has a sense of humor, which I always appreciate.

The first line of “Copper Canteen,” for example, is one I find really funny: “Honey, don’t you be yelling at me when I’m cleaning my gun.” And yet there is something really sweet about the folk sound of this song, with his son Curtis McMurtry on banjo and Rick Nelson on strings. There are a lot of lines that I really like in this song, like these: “This life that we crave/So little we save/Between the grandparents’ graves and the grandchildren’s toys” and “And your breath on my skin/Still pulls me back in/’Til I’m weightless and then I can rest.” This is one he did when I saw him in concert.

He also played “Ain’t Got A Place” at that show, performing it as the encore. This is one of my favorite tracks. Dustin Welch joins him on banjo for this one. Even as he sings that he “ain’t got a place in this world,” the song will have you tapping your feet and smiling. I love how he can surprise you with his lyrics; you can’t predict the direction he’ll go. Check out these lines for example: “Rivers run east out of West Virginia/Rivers run west down in Tennessee/A river runs north out of South Dakota/None of that makes a damn to me.” The last line comes as a delightful surprise.

“She Loves Me” has a pretty feel, but tells of an unusual love. Check out these lines: “I hear she has another/I hear she likes him well/I won’t be home ‘til Christmas/They’ll be at it for a spell/It was part of our agreement/I signed off on the deal/I must admit I never saw it happening for real/’Cause she loves me.” Excellent, right? This is another of my favorites. “I’m not writing this screenplay/It’s writing me.” “How’m I Gonna Find You Now” is another highlight, and is another that he performed at that show last year, one of the songs I was excited to hear again, and one that I’ll be adding to my road trip mix CD list, with lines like “I got a rattle in the dashboard driving me crazy/And if I hit it with my fist it will quit for a little while/Going to have to stop and take a piss in another mile” and “I’ll leave the hitchhiker standing ‘cause I haven’t got room.” This one has something of a mean bluesy rock edge.

Curtis McMurtry joins James again on “Deaver’s Crossing,” this time providing some backing vocals. Dirk Powell also provides some backing vocals on this wonderful folk track, as well as playing bass, mandolin and banjo, giving it something of a bluegrass feel.

Derek Trucks joins James McMurtry on the fun “Forgotten Coast,” playing slide guitar. And then on “South Dakota,” James McMurtry is joined by Sam Broussard on electric guitar, and by Richard Comeaux on pedal steel. This is another that he played when I saw him concert, and the line that stuck in my mind was, “And barbed wire won’t stop the wind.” Have I mentioned what a talented and intelligent songwriter he is? The beginning of “Long Island Sound” has a different vibe, a gorgeous Irish folk sound, with Mike McGoldrick on uilleann pipes. Donald Shaw plays accordion and harmonium on this track. The album then concludes with “Cutter,” which features Benmont Tench (from Tom Petty And The Heartbreakers) on Hammond B3. I know some people for whom these lines will have particular meaning: “I cut myself sharp and deep/It’s the only thing that lets me sleep/Takes the pain from off my face/And puts it in one tiny space/Where I can keep it down out of sight.”