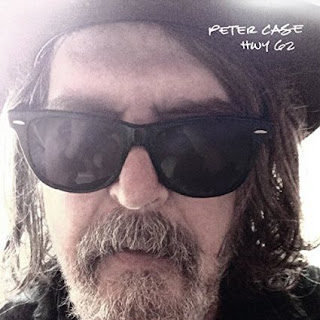 I have been a fan of Peter Case’s music for quite some time, and finally got a chance to see him perform in concert four years ago as part of a double bill with Phranc, and that show made me appreciate him all the more. He played a few songs off of his then-latest release, Wig!, which came out in 2010. Since then, we’ve heard him on the Chris Smither tribute Link Of Chain (where he plays “Caveman”), but we’ve had to wait five years for a new Peter Case CD. Well, I think any music fan will agree that HWY 62 was worth the wait. The album showcases his songwriting talent, which always impresses me. All but one of these songs are originals. I love this line from “The Long Good Time”: “The world keeps turning/What’s it turning to?” And he has some great musicians backing him on this CD, including Ben Harper on lead guitar and slide guitar, as well as D.J. Bonebrake (from X) on drums (Bonebrake also played on Wig!). Jebin Bruni plays keys on this CD (you probably heard Bruni on last year’s Ruthie Foster CD, Promise Of A Brand New Day). If somehow you haven’t yet heard this excellent singer/songwriter, this is the perfect time to get on board.

Peter Case opens HWY 62 with “Pelican Bay,” a seriously strong folk song with a bluesy edge about a man sent to the California state prison designed to hold the state’s most serious criminals. “Well, he said, there’s nothing to it/To himself as they slammed the door/In an eight by ten foot cubicle/A bed and not much more.” And I really like the line, “Lost in a one-room maze.” The statistics are always staggering, no matter how many times you hear them: “There’s two million people in prison/Tonight in the U.S.A./Eighty thousand in solitary.” Of course, it’s not just his songwriting that is impressive. Check out his work on 12-string guitar.

He takes a sweeter turn on the mellow, even pretty “Waiting On A Plane,” one of my favorite tracks. In addition to 12-string guitar, Peter Case plays piano on this one. Don Heffington is on snare drum on this track. This one finds him at an airport all night, and the song has a wonderful late-night vibe. Here is a taste of the lyrics: “Gone as far as I can go/Until tomorrow/I swear I’ll give back what I owe/Everything I stole/Well, I only meant to borrow.” It’s followed by “New Mexico,” another favorite of mine. This one is so interesting. The vocals have a kind of sweet early-1970s folk rock feel. “But the music always sounded right/When you heard it late at night/Rolling across the mesa in New Mexico.” And I love the electric guitar here.

On Wig! he included a tune called “House Rent Jump,” about not having the rent, as well as “House Rent Party,” about a last-ditch effort to try to get the rent (both of which he played when I saw him four years ago). And now on HWY 62, he has a song called “Evicted,” the natural progression, I suppose. It’s a really good song. “There are locks and chains on the door/No one lives here anymore.” Peter Case plays harmonica on this track. That’s followed by “Long Time Gone,” the album’s only cover. It’s an early Bob Dylan song, included on The Witmark Demos: 1962-1964.

The CD concludes with its title track, “HWY 62,” the CD's only instrumental track. Peter Case plays piano on this one.

CD Track List
HWY 62 is scheduled to be released on October 30, 2015 through Omnivore Recordings. The album was produced by Peter Case and Sheldon Gomberg.
Posted by Michael Doherty at 2:46 PM